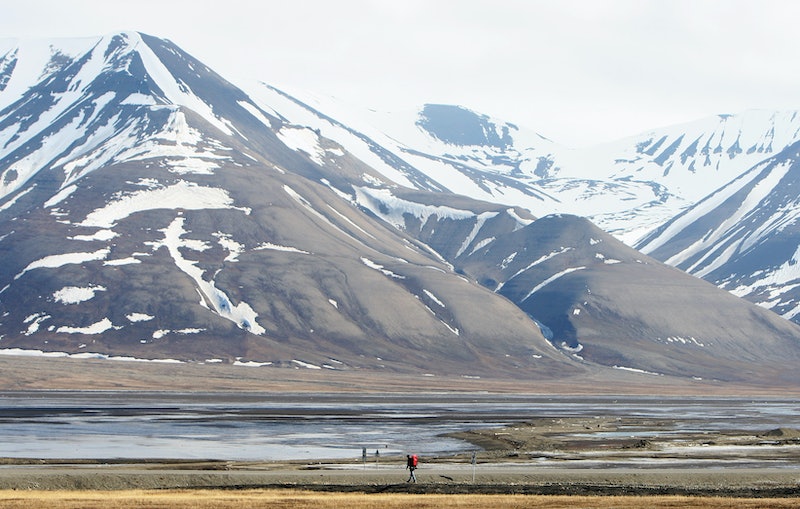 Although I would argue that death doesn’t necessarily have to be a scary or taboo thing (the death positive movement is a thing!), there are some pieces of death-related trivia that I find enormously creepy. Take, for example, the reason it’s illegal to die in Longyearbyen, Norway — or, more accurately, the reason it’s illegal to be buried in Longyearbyen after death. Hint: It involves a pandemic that took place a century ago… and apparently could still be a threat today.

Located on the Norwegian archipelago of Svalbard (shoutout to my fellow His Dark Materials fans), Longyearbyen was officially founded by John Munroe Longyear in 1906 as Longyear City, according to Longyearbyen's visitor's site. (It was renamed Longyearbyen about 20 years later, in 1926). A mining town, the main industry in Longyear City was coal — and, indeed, it remained primarily a coal mining town until about 1990. These days, the tourist industry is large, especially for such a small town; although only about 2,100 people actually live in Longyearbyen, 115,000 tourists visited it in 2016. Those who make their homes in Longyearbyen primarily come for work; it’s a site for scientific research, The population hails from about 50 different countries, and the average amount of time someone might live in the town is about seven years.

(Yes, there are polar bears in Longyearbyen.)

And, as it turns out, these temperatures are why the dead aren’t permitted to be buried in Longyearbyen soil. According to the Guardian, it was discovered around 1950 that bodies that had been buried in Longyearbyen’s cemetery weren’t decomposing. As Half As Interesting explains, this is because bodies that are interred in the earth where it’s as cold as it is in Longyearbyen are buried in the layer of soil known as permafrost — the bit that’s permanently frozen. And, just as the cold preserves bodies, the cold also can preserve any viruses within the body — like, for example, the strain of N1H1 that killed about five percent of the global population during the 1918 flu pandemic.

The reason Longyearbyen officials got so concerned when they made their discovery in 1950 is that there are a few people interred in the town’s cemetery who had died in that flu pandemic — which, they realized, meant that it was possible the virus could still be active in their buried remains. The concern was that the virus could re-infect the town if the permafrost thawed.

Indeed, more recent events suggest that these fears were well-founded In 1998, for example, researchers successfully extracted fragments of the genetic material of the N1H1 strain that was active during the 1918 pandemic from those corpses; additionally, as IFLScience points out, a scenario not too dissimilar from the one Longyearbyen officials imagined in 1950 occurred in 2016: An anthrax outbreak in northern Russia was believed to have been the result of unusually high temperatures melting the permafrost and exposing an infected reindeer carcass, according to the BBC.

So, a ruling came down: Bodies would no longer be buried in the cemetery in Longyearbyen — and that remains the case today. People living in the town who are nearing death are flown to the mainland (usually Oslo), where they live out the rest of their days and are later buried… and if you die unexpectedly in Longyearbyen? Well, one thing’s for sure: You’re not getting buried there.

Interestingly, though, locals have apparently been buried in the Longyearbyen Cemetery in recent years, according to northern-area news outlet Ice People — after they’ve undergone cremation. Cremation is usually carried out at temperatures of 1400 to 1800 degrees Fahrenheit — that is, extremely hot temperatures — and given that most viruses become inactive or can be destroyed when they’re treated with a couple hundred degrees of heat, the danger would be well neutralized after cremation. According to Men’s Health, cremated remains may be buried in Longyearbyen's cemetery in funeral urns.

Although Longyearbyen has some… uh… unique issues when it comes to death and dying, it’s not the only place in the world where dying (or something related to dying) is prohibited, or has been in the past. As Mental Floss points out, locations France and Italy seem to be particularly prone to making dying illegal; the reasons, however, often stem from a desire to encourage residents of dwindling or diminishing towns to take care of their health and prevent the town’s extinction. What’s more, the Guardian reports that the habit even goes back to antiquity: In the 5th century BCE, both dying and giving birth were not permitted on the island of Delos. Wrote Athenian historian and general Thucydides at the time, “All the tombs of those who had died in Delos were dug up, and it was proclaimed that in future, no deaths or births were to be allowed on the island; those who were about to die or give birth were to be carried across to Rhenea.”