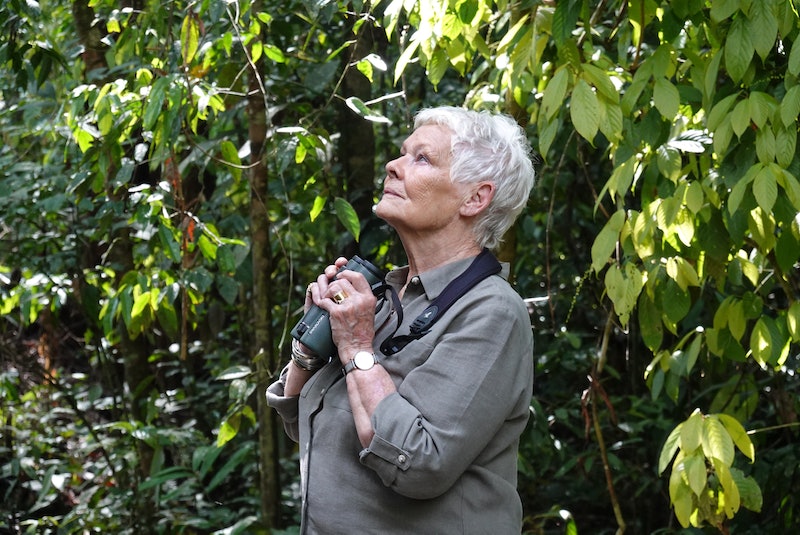 Aside from giving me severe wanderlust, documentaries about the depths of the ocean, wildest parts of the rainforest, and untouched deserts might be my favourite things to watch. It's pure escapism. While I can’t afford a ticket to the four corners of the earth, watching Britain's best loved celebrities explore is enough to keep me gripped. While you might be more accustomed to learning about the planet we live on from David Attenborough, another national treasure is embarking on a journey. ITVs Judi Dench’s Wild Borneo Adventure starts so soon and here's everything you need to know about the series.

Have you ever wondered what the rainforests of south east Asia hold? In July 2019 you will be able to watch Dame Judi Dench take an adventure through the jungles of Borneo, revealing her love for orangutans and how important their habitat is. In a forest where trees stand over 100 meters tall viewers will learn all about the tropical plants and animals that call them home, and even see Dench climb up one.

Speaking about the series in a statement, Dench said, “This trip has been the most extraordinary time of my life. This jungle is beyond my wildest dreams. Around every corner there’s always an extraordinary creature.”

Episode one of Dench’s adventure will air on July. 2. In the episode viewers will watch her arrive in the rainforest, that's said to be 130 million years old, for the first time by helicopter. Speaking about her arrival she said:

“It's spectacular. I never imagined that it would be quite so overpowering to look at. It's like flying over broccoli. It's like nothing I have ever seen before.”

Joined by experts over the course of the episode viewers will get to see incredible footage of the orangutans who, as well as being so cute, share 97 percent of their DNA with humans and are helping to prevent global warming by spreading the seeds of the trees around them which help suck up the harmful carbon in the atmosphere.

Speaking about the series Dench said, “here we are on a Wednesday morning up this incredible river, we’ve just found a crocodile. No Wednesday will ever be the same. It’s not often that this happens, that you walk along a corridor and a small, three-year old orangutan walks around the corner towards you. Such a great sight. Yet another experience in this amazing time which I will never forget.” She continued:

“I’ve learnt how vulnerable this wonderful place is and what we need to do to save it. This journey has affected me so much, and I’m thrilled I’ve been asked to be an ambassador for its rainforest.”

While many nature documentaries can leave you feeling hopeless about the affect climate change is having on our planet Judi Dench’s Wild Borneo Adventure leaves you feeling there's a glimmer of light at the end of the tunnel. Scientist Greg Asner reveals what the loss of rainforest is doing to the planet. However, he also points out that an area three times the size of London is going to be reclaimed as protected forest.

If you love nature documentaries then you can’t miss Judi Dench’s Wild Borneo Adventure. The first episode will air on July. 2 at 9 p.m. on ITV.