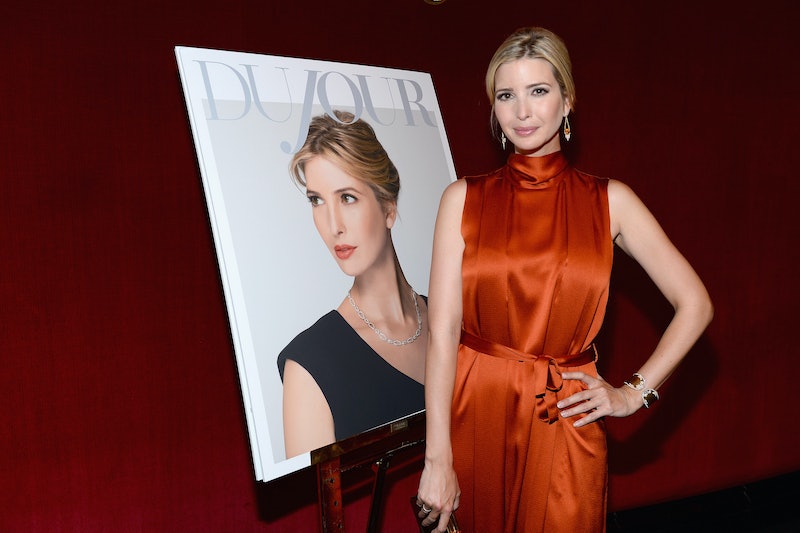 We've all done it: You've probably "liked" your own post on social media, and probably not on purpose. Because hitting "like" on your own posts can be considered strange and, well, tacky. That's probably why Twitter reacted to Ivanka Trump liking her own Instagram photos the way it has. Mainly, the reaction seems to be, "Wait... what?"

Ashley Feinberg, a reporter at The Huffington Post, shared screenshots of Trump going on a liking spree on photos that showed her by herself or her accompanied by her family. Feinberg jokingly called it a "busy night" for Trump who is reportedly figuring out who will replace White House Chief of Staff, John Kelly.

While the accounts aren't Trump's personal ones, the content specifically pictures Trump in various scenarios. Both accounts feature photos of the White House adviser, and one seems to focus on Trump's aesthetic choices or, in other words, how she dresses while the other simply seems to center on Trump's activities. And all of them have been liked by Trump herself.

In fact, the person(s) managing one of the accounts was aware of Trump's thumbs up and actually mentions it in the caption below one photo. "Ivanka Trump and the Kushner family at the National Cathedral Prayer Service last year. IVANKA LIKED," the caption read.

On Twitter, this self-liking spree did not receive positive reviews among some observers. At least, the people following Feinberg certainly seemed to have an opinion on the subject.

One Twitter used simply exclaimed, "Jesus Christ, this whole family!" while another concocted a humorous fictional scenario where Trump goes to a hotel and checks in under the fan-account usernames in order to prove that she is a "normal, average, boring" person. Those names would be, according to this Twitter user, "Ivanka Trunnp and Jared Kushmer."

For others, Trump liking her photos of herself was a sign of narcissism — as Twitter user @Zed Minus wrote:

The running majority of the sentiment regarding Trump heart-ing photos of herself was that the White House adviser was vapid and obsessed with herself. As one person said: "What kind of people like their own posts? Pathetic."

This isn't the first time that Trump's social media habit got highlighted in the news media. In October 2016, Trump "liked" a post on Twitter about her father, Donald Trump. The tweet was by The Huffington Post's politics vertical as it shared shocking remarks from Trump's father from 2004; during that year, CNN reported that Trump's father told radio show host Howard Stern that it was OK to call his daughter a "piece of a**."

In that exchange with Stern, the radio show host is heard speaking of Ivanka Trump with her father. At first, he is heard saying, "By the way, your daughter" and is interrupted by Donald Trump who said, "She's beautiful." Stern asked Trump if he could call her a "piece of a**" and he agreed.

Recently, Trump came under observer fire after she changed her Twitter bio. Initially, Trump's bio used to say that she was an "entrepreneur and advocate for the education and empowerment of women and girls." Now, however, her bio said that she was a "wife, mother, sister, [and] daughter. Advisor to POTUS on job creation [plus] economic empowerment, workforce development, and entrepreneurship. Personal [page]" and added that "views are my own." The bit on women and girls empowerment was quietly removed.

With the new social media episode concerning Trump liking Instagram photos of herself, some think there is a silver lining. As one Twitter user said: "On the plus side, the more distracted they are with liking their own tweets, the less real-world damage they can do."