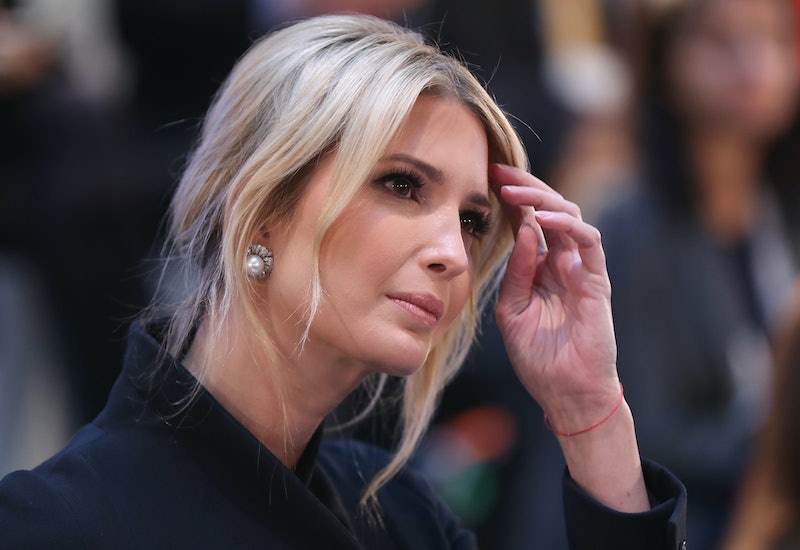 The Green New Deal is a sweeping progressive plan that, if carried out in its entirety, would totally revamp American society. Republicans in Congress haven't exactly jumped to support the plan, and the first daughter has come out against one of its key elements in an interview with Fox News. Ivanka Trump's comments about the Green New Deal's jobs guarantee show that she has a different view of what motivates American workers.

“You’ve got people who will see that offer from the Democrats, from the progressive Democrats, Alexandria Ocasio-Cortez: ‘Here’s the Green New Deal, here’s the guarantee of a job,’ and think, ‘Yeah, that’s what I want, it’s that simple.’ What do you say to those people?” Fox News host Steve Hilton asked Trump.

“I don’t think most Americans, in their heart, want to be given something," Trump said in the interview, which is scheduled to air in full on Sunday. "I’ve spent a lot of time traveling around this country over the last four years. People want to work for what they get."

The comment about Americans not wanting "to be given something" soon drew ire on Twitter, as numerous commentators pointed out that Trump herself was born into great wealth and essentially guaranteed a job through her family's business. As Business Insider reports, she began working at the Trump Organization in 2005, immediately after graduating from college, and she had been privy to the inner workings of the highest levels of the company through her father even before that — an opportunity that average employees could hardly hope to be granted themselves.

Trump's view on the Green New Deal isn't exactly in line with what most of her fellow Americans have expressed. According to a December 2018 survey on Americans' views of climate change carried out by the Yale Program on Climate Change Communication and the George Mason University Center for Climate Change Communication, 81 percent of registered voters are in support of the Green New Deal, including 64 percent of registered Republicans.

This poll was taken before Alexandria Ocasio-Cortez released a draft of the details of the Green New Deal, so those polled might have known that the universal jobs guarantee would be a part of the eventual proposal. That element in particular is one of the most progressive ideas currently becoming more prominent in the left-leaning sectors of the country, with Democratic politicians like Sen. Cory Booker expressing support for it, as The Atlantic reports.

The problem with the idea of a universal jobs guarantee is that no proposal on the subject has ever managed to explain how it could be implemented, according to The Atlantic. It's clear, however, that many Americans don't seem to have a problem with it on principle, as Trump suggested in her Fox News interview.