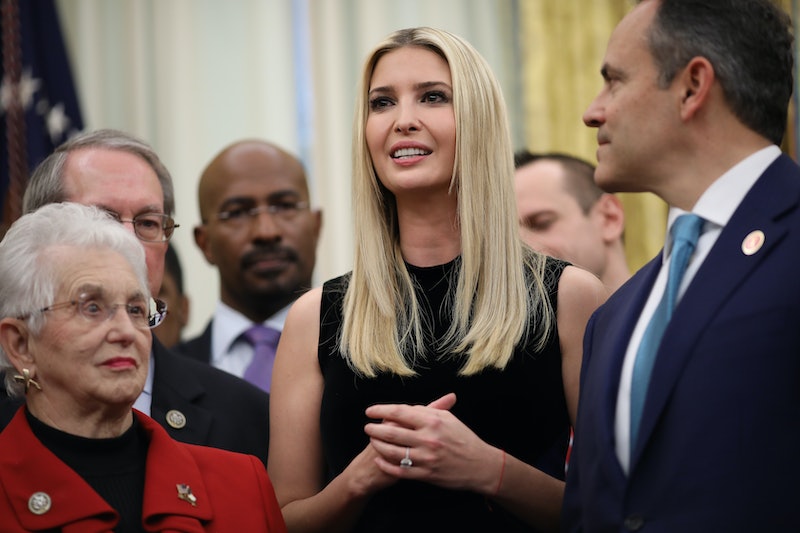 Backed by the State Department and the National Security Council (NSC), Ivanka Trump will headline a White House women's initiative focusing on global economic development. A formal launch was planned for early January but has been postponed pending an end to the government shutdown, the White House told the Associated Press on Monday.

The effort will bring together the State Department, the NSC, government agencies, and private actors to collaborate and support women's economic development worldwide. The details remain under wraps, but the AP reports that the launch event was to include remarks from government officials and representatives of financial organizations and private companies, such as the World Bank, the International Monetary Fund, Walmart and Bank of America.

Trump provided the news agency with a statement on the initiative. "I look forward to continuing to work with the interagency and members of Congress on both sides of the aisle to advance women’s access to vocational training, fuel female entrepreneurship and lift legal and social barriers that restrict our full and free economic participation," she said.

Supporting women, particularly women in business, has been a focus of Trump's since joining her father's White House as an adviser. Most notably, she pushed for the World Bank's forming of the Women Entrepreneurs Finance Initiative, which offers funding to women-led entrepreneurial efforts in countries such as Mali, Nigeria, and Yemen.

Trump first hinted of the White House initiative's existence at an event in September hosted by the World Bank. "Next year we’re going to be taking a lot of the work that I’ve discussed that we’ve been working on incrementally in various projects ... and launching a White House-led umbrella initiative that focuses on the economic empowerment of women for three specific pillars," Trump told the crowd.

Those pillars are the same three that Trump toted in her statement to the AP. The initiative will work to make vocational education and skills training available to women, promote women entrepreneurs, and help tackle barriers that keep women from fully participating in their local economies.

"We’re really excited to continue to do this work in support of, obviously, our own national security strategy, but to foster broader peace and stability," Trump said at the September event.

The pillar on supporting women entrepreneurs will dovetail with the World Bank's Women Entrepreneurs Finance Initiative. At the event in September, Trump was given much of the credit for the fund. "The idea started, literally took germination in Ivanka’s mind in April, 2017," World Bank President Jim Yong Kim said.

Trump was also a big supporter of the Women’s Entrepreneurship & Economic Empowerment Act, which passed Congress last year. "The Women’s Entrepreneurship & Economic Empowerment Act just passed Senate and is one leap closer to being signed into law by @POTUS," Trump wrote on Facebook in December. "This important bipartisan legislation will advance gender equality globally!"

The bill supports work by the United States Agency for International Development to grow women's development abroad. It also fits perfectly with the goals of Trump's new initiative.