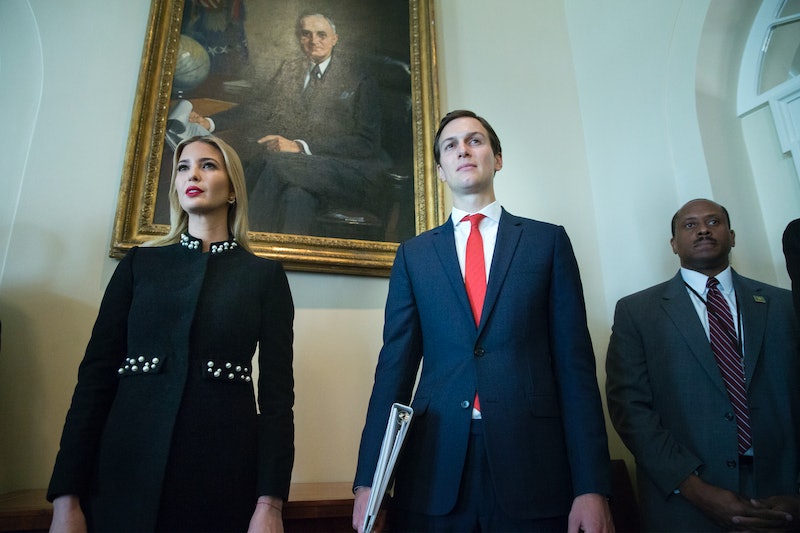 Ivanka Trump holds a unique dual role in the White House as President Trump's daughter and one of his close advisers. On Sunday, The Washington Post published an interview with Ivanka Trump, in which she reflected on these roles and also revealed why she neglects to comment on certain issues on which her father's administration is working.

In the past, Ivanka has avoided commenting on some key high profile White House issues, including, for example, the various iterations of Republican health care bills, which President Trump championed. She explained to the Post that she remains mum on certain issues because it would not be acceptable for her, as a White House staffer, to tweet disagreement with administration policies. As Ivanka described to the Post:

When people say, "Where is Ivanka and why is she silent on X, Y, Z?," they don't understand how any White House works. No West Wing staffer should tweet things that are inconsistent with the policy of the White House.

Ashley Parker and Philip Rucker of the Post also expounded on Ivanka's comments, saying that the first daughter's silence is often telling. Ivanka "does not see herself as a talking head and refuses to promote policies with which she personally disagrees," they noted; "for instance, she was notably silent on last year's Republican health-care plan, and has said little recently about her father's guns agenda."

The writers also noted that, instead of expressing discontent with policies that she does not like, Ivanka alternatively tries to promote issues which she feels most strongly about: "workforce development, infrastructure and women's entrepreneurship."

Sunday's Post article does not constitute the first time Ivanka has commented on why she will not publicly voice dissent with the decisions made by her father's administration. Back in September 2017, the first daughter told the Financial Times:

Ivanka's silence on a variety of issues has caused some to accuse the first daughter of being "complicit" in her father's agenda — a notion that perhaps received further traction due to a widely-discussed SNL skit. Jennifer Wright of Harper's Bazaar addressed the issue in a piece for the magazine in April 2017, accusing Ivanka of "sit[ing] quietly while Trump implements or tries to implement policies that will hurt the very women she, a self proclaimed feminist, is supposed to be trying to 'empower.'"

Ivanka has addressed the accusation of reported complicity in the press as well, telling CBS This Morning during an interview:

If being complicit is wanting to, is wanting to be a force for good and to make a positive impact then I'm complicit. I don't know that the critics who may say that of me, if they found themselves in this very unique and unprecedented situation that I am now in, would do any differently than I am doing. So I hope to make a positive impact. I don't know what it means to be complicit, but you know, I hope time will prove that I have done a good job and much more importantly that my father's administration is the success that I know it will be.

More recently, Ivanka has also received condemnation for initially refusing to comment on the sexual misconduct allegations against her father (allegations which Trump has repeatedly denied). During an interview on NBC News in PyeongChang, Trump said that she thought it was "pretty inappropriate ... to ask a daughter" about accusations against her father. However, she also said that "I believe my father. I know my father. I think I have that right as a daughter."

Notably, the Post reported that Ivanka refused to address the issue when she was being interviewed for the article published on Sunday.

Overall, it seems clear that Ivanka's silence — or lack thereof — is telling when it comes to revealing the first daughter's stances on various issues. Moreover, Ivanka's refusal to comment on certain topics has certainly caused a good deal of controversy, as some members of the public expect more from America's first daughter and one of Trump's presidential advisers.