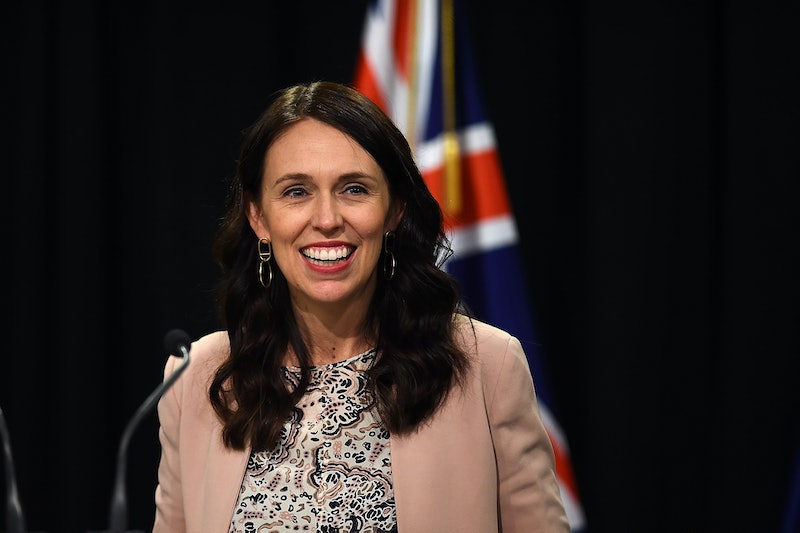 For the first time in the organization's history, a baby attend the United Nations General Assembly. Jacinda Ardern, the prime minister of New Zealand, brought her 3-month-old infant to the UNGA on Monday as she delivered her debut speech at the Nelson Mandela Peace Summit. Ardern's baby, Neve Te Aroha, sat in her partner Clarke Gayford's lap the New Zealand premier lauded Mandela's legacy.

In photos taken by the Reuters news agency, you can see the premier's baby nestled in Gayford's arms. According to The Guardian, Ardern briefly spoke of Aroha's presence, saying, "I have the ability to take my child to work, there’s not many places you can do that." The publication reported that Ardern is currently breastfeeding Aroha, so she had to bring her young one to New York for her United Nations trip.

Per The Guardian, the New Zealand premier said, "I am not the gold standard for bringing up a child in this current environment because there are things about my circumstances that are not the same."

On Twitter, Ardern's partner Gayford shared an amusing detail from his visit, noting that he witnessed some people were simply surprised to see Aroha at the General Assembly. Gayford tweeted a photo of Aroha's picture ID and added, "I wish I could have captured the startled look on a Japanese delegation inside the United Nations yesterday, who walked into a meeting room in the middle of a nappy change. Great yarn for her 21st [birthday]."

Making history is nothing new for Ardern. She became the second only female world leader to have a baby while in office. The first one was Pakistan's former prime minister Benazir Bhutto, who gave birth to her daughter while in office in 1990.

In her speech, as Aroha took in the view in Gayford's lap, Ardern said of Mandela, "When I say his impact was global I mean it. Nelson Mandela had a profound impact on New Zealand." Ardern spoke of her own father, remembering his work as a member of the New Zealand police force who witnessed the anti-apartheid protests in the country at the time.

"[Mandela]'s struggle against apartheid was supported in New Zealand through a mass protest movement," she said, "that opposed sporting contact between our countries, culminating in major protest events in 1981."

"Today," the premier added, "let us remember Mandela and the values he devoted his life towards on his long walk to freedom."

Breaking norms in her country, Ardern is also the youngest prime minister in New Zealand's history since 1856, according to the BBC. She has also attracted controversy in the past; in April, Ardern responded to comparisons between her and Donald Trump. A 2017 article from The Wall Street Journal claimed that Ardern was "New Zealand's Justin Trudeau" but that she was "more like Trump on immigration." In a TODAY interview, Ardern slammed the comparison, praising her country's openness, and said the description made her "extremely angry."