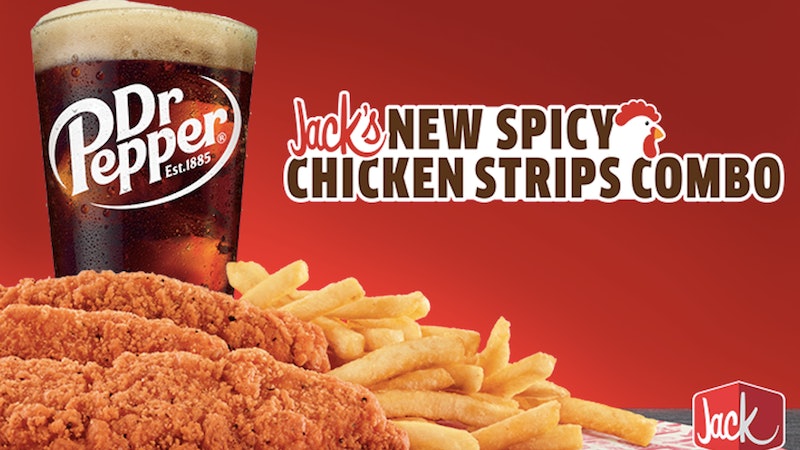 When you eat chicken strips, it's about so much more than just the taste. It’s about the golden brown crisp, the crunch when you take a bite, the texture of your favorite dipping sauce. Jack in the Box knows that eating chicken strips is a complete sensory experience, so they’re celebrating their new spicy chicken strips accordingly.

On May 31 and June 1, Jack in the Box and Bustle are hosting a pop-up event in Los Angeles that wants to overload your senses. You can smell your way through the Jack in the Box menu “department store fragrance-style,” dive into the “world’s most unique foam pit,” and hear the satisfying crunch of eating spicy chicken strips at a custom ASMR station. And, of course, your journey will culminate in actually getting to snack on the yummy new strips.

The spicy chicken strips, which will only be offered at Jack in the Box from April 22 to June 30, promises to be a bold and delicious addition to the already extensive Jack in the Box menu. The website describes them as “big, crispy, juicy” and, like all of Jack in the Box’s chicken, guarantees that they’re made with 100% all-white meat. The strips come in a three-piece or five-piece combo deal, giving you a small drink and fries, with the prices varying by store. You can feel free to dip your strips in any of Jack in the Box’s seven dipping sauces — barbecue, Frank's RedHot buffalo, honey mustard, sweet and sour, teriyaki, zesty marinara, and the house buttermilk ranch.

The spicy chicken strips campaign began on April 19, when digital content creator Lele Pons tweeted Jack Box, the “Challenger-in-Chief” of Jack in the Box, that she had some “BIG ideas” for his chicken. They released an ad soon after where Pons makes the case for her chicken credentials; the ad shows her as a child sucking on a chicken-strip pacifier and later getting a chicken-strip tattoo. By the end of the ad, Jack Box is convinced and the spicy chicken strips are born.

Pons is a huge fan of the new spicy chicken strips and insists that the strips are a great choice for everyone, even if spicy food isn't normally your thing.

“I’m really critical with what I eat, and it’s really good,” Pons told Bustle last month. “I’m not a spicy person, but I’m a spicy person now.” She added that the strips were so flavorful that they were delicious plain, so they're a great option if you're not feeling any of the many dipping sauces.

The spicy chicken strips add to Jack in the Box’s already extensive menu, which has everything from chicken fajitas to burgers. They are, however, one of the only spicy options on the menu (the other option is Jack's Spicy Chicken sandwich) so they're definitely a stand out addition. Make sure you grab your strips before June 30 or, to get the full experience, you can RSVP to the pop-up event here.