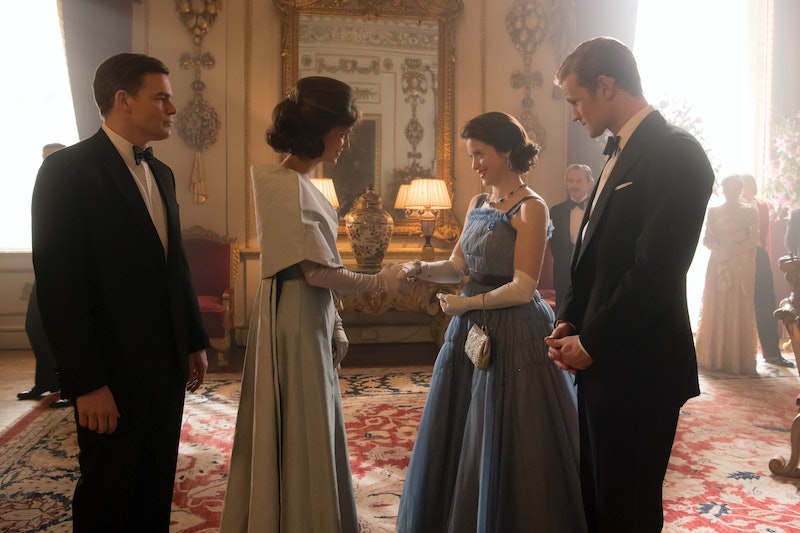 The Crown's more personal moments help to humanize Queen Elizabeth II, known to most only as a public figure and a monarch. And such is the case in Season 2, Episode 8 of The Crown, in which Queen Elizabeth II comes face-to-face with the new American First Lady, Jackie Kennedy. The show portrays their meeting as one fill of slights and misunderstandings, but what was Queen Elizabeth and Jackie Kennedy’s relationship like in real life?

It’s 1963 in the episode, and the world is crushing on Jackie Kennedy (Jodi Balfour). She’s beautiful, smart, accomplished, and fashionable, and her recent state visit (with her husband, President John F. Kennedy, played by Michael C. Hall) to France has set her apart — she may even be more popular than the President! Everyone is in love with Jackie, and so Elizabeth, who has many feelings but never quite knows how to handle them, sets up a dinner to meet the American President and his wife. It’s part curiosity and part diplomacy, but it’s mostly portrayed as Elizabeth wanting to size up Jackie. The Kennedys arrive and blow their introductions, and Elizabeth is on the offense — she offers to take Jackie on a tour of Buckingham Palace.

Unfortunately, as it is when you realize you like someone you thought you hated, Elizabeth and Jackie realize that they have more in common than expected. They’re both shy and married to showboats, public life thrust upon them without their consent. They also love animals and the countryside, and who else would watch a spin-off of The Crown with just these two ladies and their dogs, walking the fields of Oregon or England? Just me?

It’s satisfying to watch Elizabeth soften, as she is always on edge, the weight of Queen pressing down heavily. Jackie K. is actually pretty cool… until it gets back to the Queen that Jackie had some not-nice things to say about her and the Palace, namely that it’s drab and dull and that Elizabeth is middle-aged. That’s a sore point. Elizabeth, as she recounts to her mother earlier in the episode, is feeling “middle-aged.” She hurt herself getting into a truck, and those aches and pains certainly don’t lessen as you get older. Her mother, to her credit, tells Elizabeth that she’s not even done having kids yet and to chill out. Good advice, Queen Mum, and not a good look for Jackie.

It seems, however, that Jackie has been used as a pawn by her husband. John F. Kennedy takes great delight in telling her that he purposely had rumors spread that would spur Elizabeth into taking political action. His wife is mortified and seeks out a meeting to explain herself to Elizabeth.

In the end, though, the women reach an understanding in the ways that they must posture themselves in public life, and when President Kennedy is assassinated very soon after, Elizabeth mourns with the Americans. She orders flags flown at half-staff and the bells of Westminster Abbey to peal in memoriam for the slain American President.

So how much of this actually happened? Well… it’s hard to say. The first dinner, according to Town & Country, took place in June 1961, and the banquet did allegedly have some real-life drama. In America’s Queen, a biography of Jackie Kennedy written by Sarah Bradford, Jackie’s sister, Lee Radziwill, and her brother-in-law, Polish royal Stanislaw Albrecht Radziwill, were kept off the guest list at first because they had both been divorced prior to their marriage. Divorced persons were a no-no at the table of the Queen. Elizabeth eventually relented to this point, but she kept Princesses Marina and Margaret from the party, allegedly because Jackie had especially asked for them. Jackie wasn’t happy, expressing her disdain to friend and writer Gore Vidal. "No Margaret, no Marina, no one except every Commonwealth minister of agriculture they could find," she reportedly told him, according to the book. Jackie also allegedly said that Prince Philip was "nice but nervous" and the Queen was "pretty heavy-going." It’s worth it to say that this is still all rumor — as Reader's Digest reports, both Prime Minister Harold Macmillan and President Kennedy’s Chief of Protocol said that the evening was “very pleasant.” It's true, though, that the Queen did indeed insist that the tenor bell in Westminster Abbey be rang in memoriam after Kennedy’s assassination, and Prince Philip attended the funeral.

There is a natural inclination to pit women — especially women in positions of power or the public eye — against each other. All of the rumors that swirled around the 1961 dinner are simply that — rumors — and there’s no way to really know, save for asking the Queen herself, what really happened between her and Jackie Kennedy. Both Elizabeth and Jackie had an enormous amount of pressure on her shoulders at the time of their meeting, but it doesn’t mean that they were in competition, and it doesn’t mean that they had to dislike each other. They could, like any other man in the world, chosen to do their jobs without comment or causing a scene. Did Jackie and Elizabeth love each other? Probably not. Did they hate each other? Probably not. In reality, both women, thrust into a tough world, met as part of their official duties, and it doesn’t have to be more than that. It wouldn’t be more than that if we were talking about two men, and it lessens the intelligence and legacy of Jackie and Elizabeth to assume that an alliance between two nations (or just a dinner!) can be boiled down into what amounts to a catfight between countries.

More like this
Here’s How You Can Watch Season 3 Of 'Never Have I Ever' In The UK
By Frances Stewart
'Stranger Things' Season 5 Will Echo Season 1 In A Key Way, The Duffer Brothers Confirm
By Kadin Burnett and Sophie McEvoy
‘Squid Game’ Creator Hwang Dong-Hyuk Just Dropped A Major Season 2 Tease
By Brian Anthony Hernandez and Bustle Editors
What's New On Netflix: A Third '365 Days' Movie & Lili Reinhart’s New Film
By Arya Roshanian
Get Even More From Bustle — Sign Up For The Newsletter