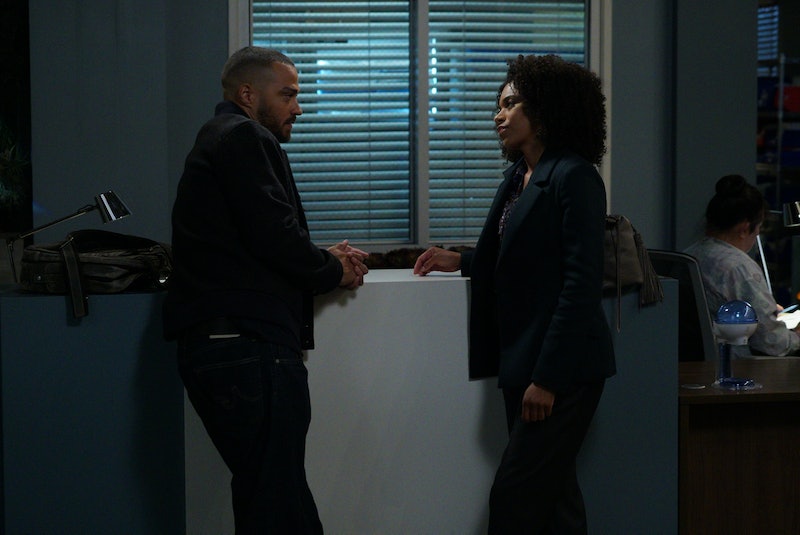 I think I speak for much of the Grey's Anatomy fanbase when I say — stop trying to make Maggie and Jackson happen. It's not going to happen. Or, at least, no one wants it to. On this week's episode of the medical drama, shortly after Jackson dumped his perfectly great new girlfriend, Priya, and Maggie found out that her Tinder dream boat Clive was married, they put that very forced chemistry to the test and finally shared a kiss. And, as it turns out, Grey's Anatomy fans aren't thrilled with Maggie and Jackson.

Twitter was soon abuzz with puzzled viewers questioning why this show is trying so hard, for no particular reason, to make this odd couple work. Jackson and Maggie separately are solid, fine, even intriguing characters who are perfectly capable of dating other people who make more sense, so why is this random pairing necessary? There is no common strain between them — they have virtually nothing in common except for the fact that they're both surgeons and their parents ended up marrying each other, and they don't have some intense shared trauma or harrowing experience that would bond them together in a meaningful way. They just happen to exist in the same hospital, which apparently is enough to build a romance on.

This romantic development was almost like salt in the wounds of fans who have been holding out hope for over a year for Jackson and April to get back together. Viewers were already fragile on Thursday as news broke that Sarah Drew, who plays April, would be exiting the show after this season along with Jessica Capshaw. Several fans expressed their displeasure that Jackson and Maggie's relationship came to this head on the very same day that April's exit was announced, and said that they hope Shonda Rhimes doesn't think that pairing Maggie with Jackson will ease the pain of April's departure.

April and Jackson had deep, serious, meaningful flaws in their relationship, and those issues ultimately lead to their demise, despite the fact that they experienced losing a child together and are now co-parenting a daughter. But there was real passion and love there, and that's why that heartache hurt so badly. It's hard to imagine Jackson and Maggie having a deep, serious, meaningful... anything. Nevermind the fact that Jackson and Maggie are step-siblings — sure, that's kind of weird on the surface, but they were fully grown adults when their parents found each other; they weren't raised in the same home, and they didn't even meet until later in life. That's not the problem here — the problem is that a show so filled with iconic, nuanced, compelling romances in its past — Meredith and Derek, Cristina and Owen, Richard and Adele — is now trying to seemingly throw together a relationship between two important characters out of pure boredom or curiosity, and expecting fans to be on board.

Again, Maggie and Jackson are characters who are both, at their cores, full of potential, and are played by incredibly talented actors. Grey's Anatomy writers shouldn't diminish that by thrusting them into a relationship that feels like an afterthought — an unnatural pairing between two people that honestly just don't have much chemistry between them. There are eight billion other people who work at this hospital. There are plenty of other characters who aren't doing jack squat. Not every single interaction between two single people needs to lead to a romance, especially when those two people aren't just interns or side characters without much to do — they're essentially two of the biggest pillars of the show in recent years. Grey's has always offered genuinely interesting looks into relationship dynamics between all different kinds of characters, and this just feels sloppy. Viewers — and Jackson and Maggie themselves — deserve better.