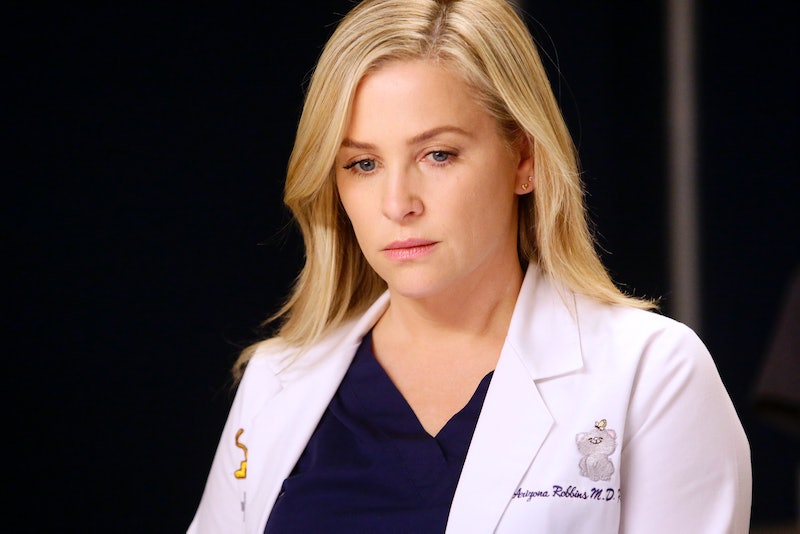 Whenever I re-watch Grey's Anatomy, I don't start with Derek Shepherd waking up in Meredith's apartment after their first hookup. I start with Season 5, when Callie first meets Arizona in a bar. I start here, because I want to watch someone like me find love — and it took the show five seasons to introduce a lesbian character who would go the distance on the show. That's why Jessica Capshaw leaving Grey's Anatomy is such a let down for people like me in the queer community.

Deadline announced on Thursday that Capshaw's character Arizona (along with Sarah Drew's April) would be leaving the show at the end of current Season 14. Deadline reported that the exits are "based on the show's creative direction" rather than the actors' decisions. In a statement reported by Deadline, co-showrunner Krista Vernoff said:

"The characters of Arizona and April are permanently woven into the fabric of Grey’s Anatomy thanks to the extraordinary work of Jessica Capshaw and Sarah DrewAs writers, our job is to follow the stories where they want to go and sometimes that means saying goodbye to characters we love. It has been a joy and a privilege to work with these phenomenally talented actresses."

It's unclear why the show felt that Arizona's story "wanted" to go away from the show all together, but it's a loss that will be hugely felt by the LGBTQ community. For 10 years, Capshaw portrayed Arizona as so much more than just her sexuality — while also still acknowledging that her sexuality was a big part of her character. Watching Arizona made me feel seen.

The character isn't actually the first series regular gay woman that Grey's has featured — but she is the last one standing. Initially, in Season 4, Callie (who at the time was discovering that she was bisexual) began dating lesbian Erica Hahn (who realized that she was gay later in life). But, when Erica left the show in Season 5, it made room for the recently-introduced Arizona and Callie to get together.

The couple eventually got married and had a child together. And, though they later got divorced (this is Grey's Anatomy, it can't all be happy), Arizona and Callie stayed huge parts of the cast, which was great for LGBTQ visibility.

This is something both creator Shonda Rhimes and Capshaw noted in their statements about the exits.

"Both Arizona Robbins and April Kepner are not only beloved but iconic — both the LBGTQ and Christian communities are underrepresented on TV," Rhimes said in an Instagram statement. "I will be forever grateful to both Jessica and Sarah for bringing these characters to life with such vibrant performance and for inspiring women around the globe."

Capshaw posted to Twitter to say goodbye to the character as well, highlighting Arizona's role in LGBTQ representation.

Watching LGBTQ characters on screen is how I learned I was bisexual. I hadn't even known that was a recognized thing until the Glee storyline where Brittany and Santana get together. I only started watching Supergirl after I heard that Kara's lesbian sister gets a romantic storyline. And as said, when I re-watch Grey's Anatomy, I start with that first kiss between Callie and Arizona.

I don't think TV producers understand enough what representation means to audiences. Like many others, I have actively chosen to watch shows because of the LGBTQ representation. That kind of thing can gain shows viewers. It breaks my heart that the decision to write off Arizona came because the series decided her storyline was over rather than because Capshaw wanted to leave of her own accord.

When, in Season 12, Sara Ramirez decided to leave the show, LGBTQ fans were sad about losing Callie but understanding that the actor was making a choice. For awhile, Callie's absence meant a blow to the show's LGBTQ representation and to Arizona's storylines. With her romantic partner and the mother to her child gone, Arizona's role on the show shrunk. She had a series of failed romances and seemed to appear less and less on screen. But, her story has been picking back up in Season 14. She's dating a fellow female doctor, all while navigating single motherhood, and crushing it, as always, in her job. Things have been getting better for her character, and until the news on March 8, I was excited to see that continue to develop.

But unfortunately, the Grey's Anatomy team didn't feel Arizona's story was worth developing more, despite the character being one of the very, very few lesbian characters on TV. While representation is always growing for minority characters, female gay characters are still woefully underrepresented. I can only hope that Grey's chooses to end Arizona's story without killing her off. The queer community does not need another gay woman to die on screen. In 2017, Out magazine reported that 62 lesbian or bi female characters had died or been killed over the previous two TV seasons. It's practically an epidemic for female gay characters, and it'd be a tragedy if Arizona met the same fate.

Arizona was a beacon of light to young women like me to show that you could like women and still be normal in every way. Girls like me out there deserve to have a role model on a network show in a TV landscape that too often refuses to acknowledge us. Losing Arizona Robbins before Capshaw was ready to go does a disservice to longtime fans of the show and the queer community watching.

The L part of LGBTQ is all too often neglected on TV, and it was so great to see that Arizona was given the same treatment as every other doctor in that hospital... until she wasn't. Until her role was diminished to the point that Grey's felt they didn't need her at all anymore — when the truth is that she's needed now more than ever.

More like this
UK Viewers Will Have To Wait To Watch The Handmaid’s Tale S5
By Maxine Harrison
Paul Mescal, Man Of Mystery
By Samantha Leach and Heather Hazzan
Mike Flanagan Teases 'The Midnight Club' In This Exclusive, Creepy Clip
By Grace Wehniainen
'The Rings Of Power' Episode 6 May Reveal Sauron’s Identity
By Grace Wehniainen
Get Even More From Bustle — Sign Up For The Newsletter