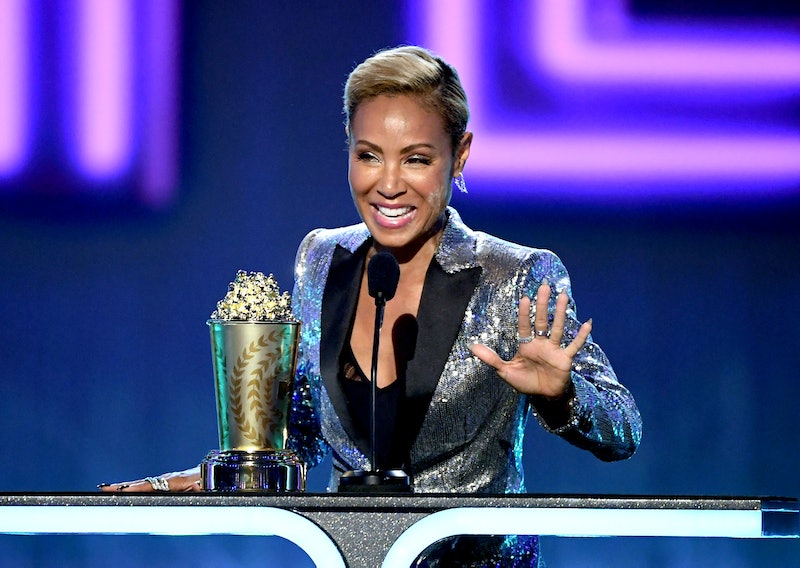 Jada Pinkett Smith might not have initially thought that she was worthy of the MTV Trailblazer Award. But Jada Pinkett Smith's speech at the 2019 MTV Movie & TV Awards helped to highlight exactly why she earned this recognition. As presenter and her Girls Trip costar Tiffany Haddish noted, Pinkett Smith didn't just win this award for her roles in movies and TV shows like A Different World, The Matrix trilogy, Gotham, and (of course) Girls Trip. It's also for her breaking ground with her web series Red Table Talk. As Haddish said, "She's not making a talk show, she's making a show with real talk." But rather than focus on her own accomplishments in her Trailblazer acceptance speech, Pinkett Smith focused on everyone else in the room for blazing their own trails everyday.

In 2018, Pinkett Smith launched her web television talk show Red Table Talk on Facebook Watch. The show has featured guests like Haddish, her husband Will Smith, her son Jaden Smith, Gabrielle Union, and Leah Remini and has covered topics like motherhood, sex, immigration, religion, domestic abuse, and race. Alicia Keys and Queen Latifah praised their pal in a pre-taped segment before Pinkett Smith took the stage with Jaden to accept her award.

Pinkett Smith said in her speech how she wasn't sure if she deserved the prestigious title of "trailblazer" just yet. But then she came to the revelation that most people are unrecognized or silent trailblazers for facing their own internal struggles. Pinkett Smith said:

"Often we applaud the trails people blaze in the external world that we can see, but very rarely do we applaud that trails that are blazed in the hidden rooms of the mind that are full of uncertainty, false beliefs, and pain. And it's these internal obstacles that must be challenged in order to muster the courage to forge new paths that we can see in the world. Every last person in this room must do that at some capacity, so that means that every single person in this room is trailblazing whether it's within or without."

While fans of Pinkett Smith's have acknowledged her trailblazing qualities for years, her humble response to the award just further shows why she is so beloved. She was relatable in explaining how she didn't really consider herself a trailblazer (despite her long success as a performer and now with her real talk on Red Table Talk) and then somehow made the award about everyone else in the room at the MTV Movie & TV Awards.

Past awardees of the MTV Trailblazer Award have been Emma Stone, Emma Watson, Channing Tatum, Shailene Woodley, and Lena Waithe. But Pinkett Smith pretty much gave the award to everyone else in attendance at the 2019 MTV Movie & TV Awards. "So as you honor me tonight, I wanna honor all of you and I want to say, 'Here's to us for all of our trailblazing. Keep it up and thank you!'" Pinkett Smith said to close out her speech. Because a trailblazer doesn't need to be making as big of strides as Pinkett Smith to know their worth.