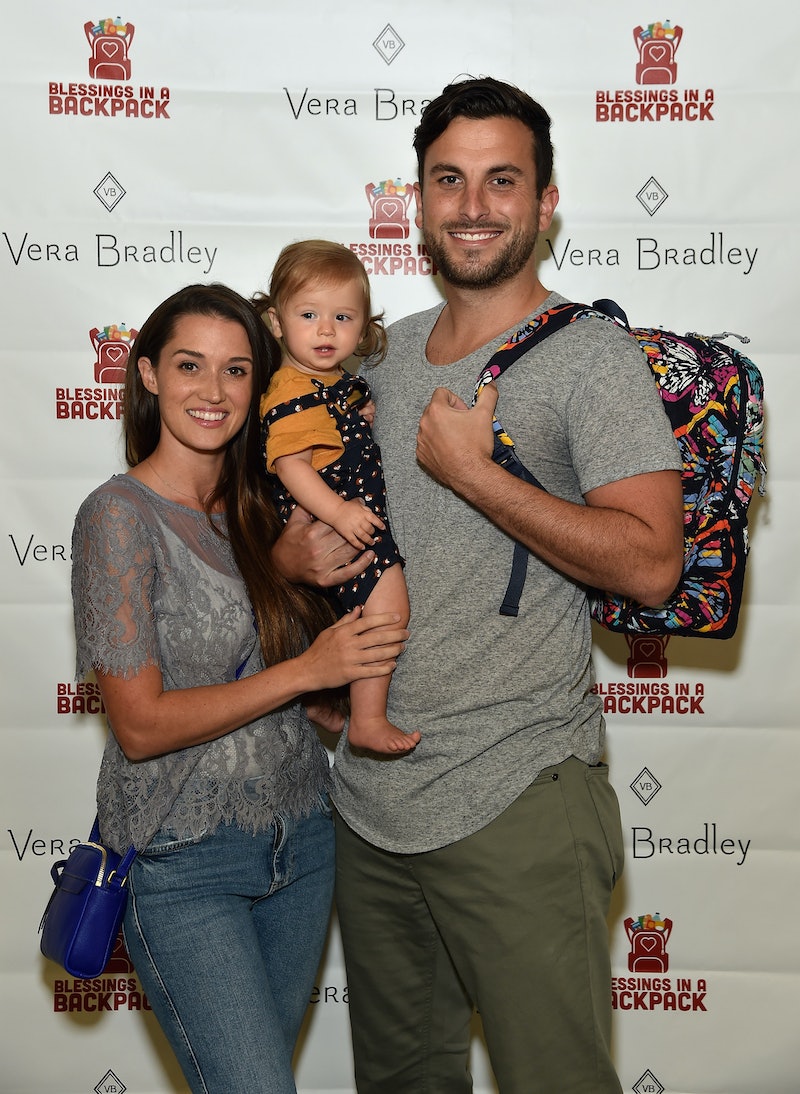 Bachelor Nation is about to get a little bit bigger. Bachelor in Paradise alums Jade and Tanner Tolbert are expecting their second child and they announced the news with the sweetest set of family photos on Monday. Jade shared two pictures with Tanner, their daughter Emmy, and herself holding up a strip of sonogram photos.

Fittingly enough, the happy family posed for the pictures on a beach. Could this be a nod to their Bachelor in Paradise origins? Possibly, since Jade and Tanner met in 2015 while filming the show's second season. They got married the following year with a televised wedding special.

"Baby #2 is adding to our crew!! We are overjoyed our bundle of love will be joining us in August! We’ve been dreaming of you for a while now, and you are already loved beyond imaginable, sweet baby."

In April 2018, the BIP alums told Us Weekly that they were "very low-key trying" to conceive a second child. Tanner shared, "We want to have our kids close in age. So, it was time to start rolling." The Bachelor Nation darlings welcomed their daughter Emerson in August 2017.

In that same interview, Jade said three children "would be the magic number" for their family. However, Tanner had a more specific plan in mind when it comes to expanding their family. He declared, "I’m going to keep trying until we have a boy."

So is baby number two a boy or a girl? The parents have not made that announcement just yet.

In another 2018 interview, Jade also discussed their desire to have children who are close in age. She explained to People, "I just love the idea of our kids being best friends. She also joked, "Though, they might hate each other at some point!"

Tanner jumped ahead and chimed in about the possibility of baby number three. He told People,

"I think the third one is the scariest one because at least there’s two of us, and by the time the second one would come along, Emmy would be old enough for me to kind of handle."

He also admitted that four kids would probably be the limit for their family. However, Tanner did joke, "I mean, if we had four girls… I’m not saying I wouldn’t try again."

However, Jade confessed that she was hoping for another daughter to accompany Emmy as her first sibling. She revealed, "Actually, our next one, I would love to have a girl if I could choose. Then, she explained, "I like the idea of sisters, and then a boy." Maybe they can both be contestants on The Bachelor together in 2042.

Apparently having a girl would also save them some time searching for baby names, since they already have one picked out. Tanner revealed at the time, "Boy, we’re still debating." Jade shared, "Boy names are hard for us for some reason." Maybe they could go for a Tanner Tolbert Jr. Chris and Harrison are great possibilities as well. Why not give a nod to the reality TV franchise that brought them together?

Chris Harrison didn't mention any name suggestions on the Instagram announcement, but he did congratulate the couple with a comment. Bachelor alums also wished them well in the comments section, including Catherine Lowe, Becca Kufrin, Raven Gates, Arie Luyendyk Jr., and Ashley Iaconetti. And whoever runs their daughter Emmy's Instagram account left a sweet message about becoming a big sister.

Whether baby Tolbert is a boy or girl, that child is going to get a lot of love from parents Jade and Tanner, big sister Emmy, and of course, all of Bachelor Nation, whose members are probably waiting for the unborn child to join Instagram.