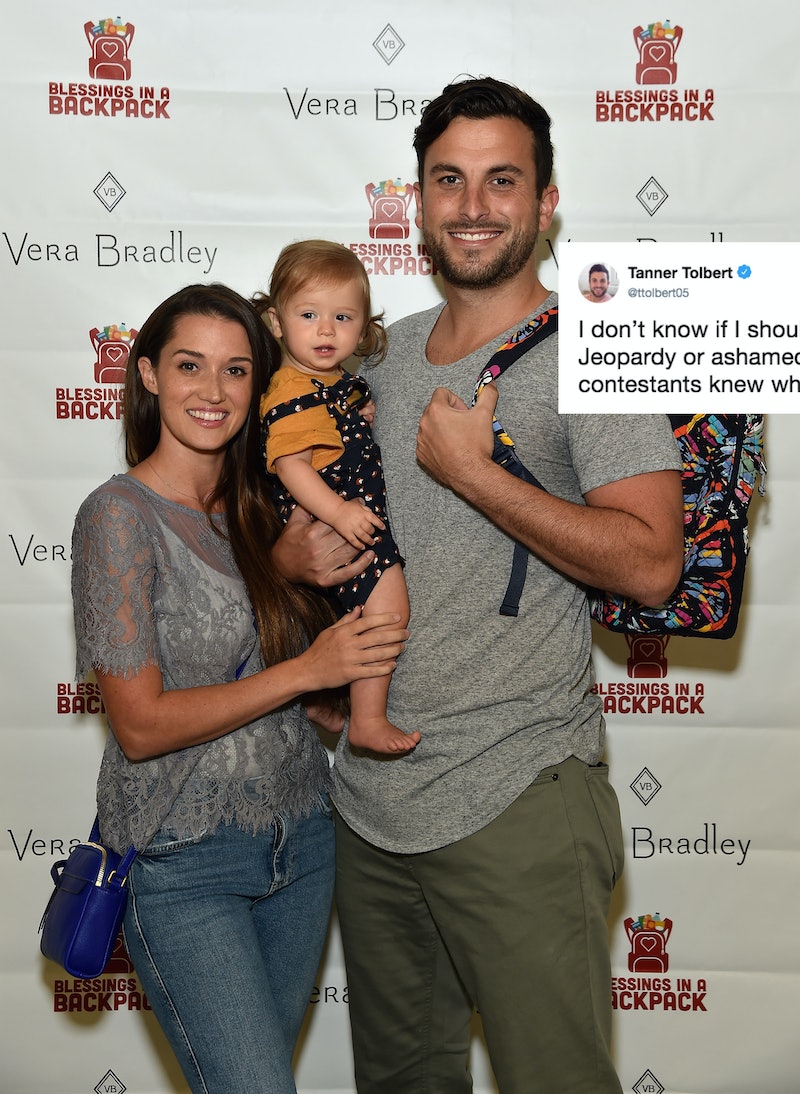 Social media influencers can measure success by things like followers, likes, comments, and advertisement revenue. But what about being on the show Jeopardy? Jade and Tanner Tolbert, along with their daughter, were in a Jeopardy clue on Tuesday. Not only that, but Emerson (aka Emmy) was specifically mentioned for having a super popular Instagram account. That's definitely a major accolade for any social media influencer, but it's really a big deal considering that Emmy is not even 2 years old yet.

A fan tweeted a screenshot from the Jeopardy episode with the clue: "Jade & Tanner Tolbert, stars of this 'In Paradise', set up an account for baby Emerson, pre-birth; 100,000 followers later." It's so cool that Emmy's follower count is a part of a Jeopardy episode. (And actually, Emmy currently has 144,000 followers on Instagram. Maybe she will gain even more from the Jeopardy exposure.)

Then again, no one actually answered this corrected. Tanner quoted the fan's tweet and joked, "I don’t know if I should be thrilled we were on Jeopardy or ashamed that none of the contestants knew who the hell we were. Lol." Really? No one could think of the word "Bachelor"? Do they not watch Bachelor in Paradise? They're missing out.

There were plenty of Bachelor in Paradise fans who were screaming at the TV and via Twitter about their outrage over the lack of correct responses. One fan told Tanner that the Jeopardy contestants should "be ashamed."

Another Jeopardy viewer admitted that the Bachelor in Paradise question was the only one they correctly answered. #Priorities

Apparently, there weren't any BIP viewers on the actual Jeopardy episode, but there were plenty of Bachelor in Paradise fans at home.

Another tweeter admitted to shouting at the television screen before mentioning Jade and Tanner's fellow Bachelor in Paradise alum Jared Haibon.

Yes, Jared is very aware of the Tolberts' newfound Jeopardy fame. Tanner actually posted a screenshot of his own tweet on Instagram and admitted, "I can die happily now after being a Jeopardy question."

Sarah Herron, who also appeared on Bachelor in Paradise Season 2 with the couple, commented on Emmy's impressive Instagram fame.

And just in case Tanner's friends, family members, and followers were not aware by the Jeopardy mention, he shared it for a third time on social media by also posting it on his Instagram Story. He declared, "Well... I've officially made it" and "Got a mention on Jeopardy..." And the same can be said for Emmy. She "finally" made it and she's still a baby, who has probably never seen this show.

Tanner wasn't the only Tolbert celebrating the Jeopardy mention on social media. Jade posted to her Instagram Story, "Whaaaaaaaat. This is the coolest! Thanks for featuring us @jeopardy!"

Ironically enough, the only Tolbert family member who didn't post about Emmy's Instagram account getting a shoutout on Jeopardy was Emmy herself — not that she actually operates her own Instagram, but still. If anyone was going to brag about this on Instagram, Emmy really should. However, she's just too modest for that.