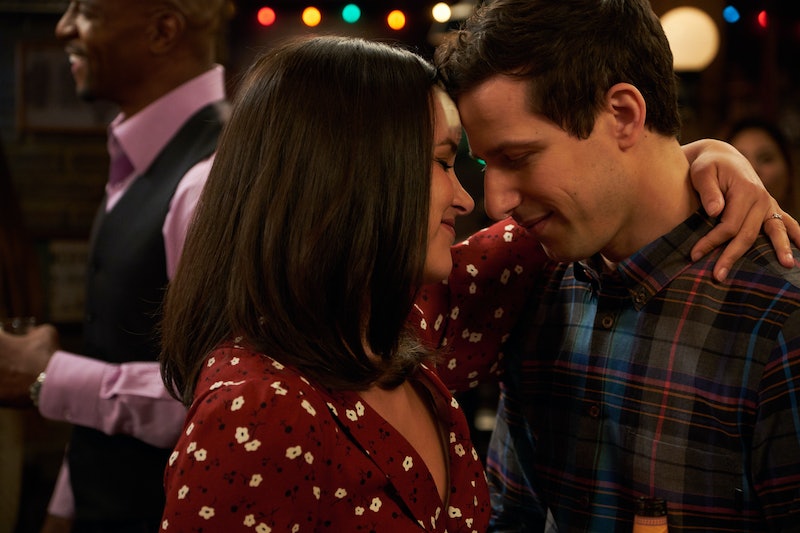 Brooklyn Nine-Nine, like any sitcom that's made it this far, has started to follow some pretty predictable patterns. Jake often finds himself in sticky situations and needs to pull off a complicated scheme to get out of those circumstances. Amy, on the other hand, strives to perform to the best of her ability while simultaneously trying to choose the right thing to do. However, "Bachelor/ette Party" switches these circumstances, putting Amy in the middle of a madcap caper with her party while Jake finds himself struggling to try and make everyone at his party feel happy and valued. Seeing the two characters step into situations usually suited for their other half is another example of how far these two have come since the show's start. They're truly ready for a life together — as long as they can make it through their respective bashes.

Jake's event starts as anyone could've expected — with Charles going over-the-top to try and present Jake with the best bachelor party ever. This, of course, involves a complicated scavenger hunt and Charles faking his own kidnapping. However, the promise of a six-hour kidnapping rescue game leaves Terry and Holt wanting. And so, Jake is stuck between providing Holt and Terry what they want — which is steaks and whiskey as soon as possible, thereby skipping the hunt — or giving Charles the satisfaction of believing that he put together a great party. Trapped between making two groups of people happy, which is almost certainly Amy's worst nightmare, Jake gives Terry and Holt what they want, much to Charles disappointment.

However, Jake not only manages to mend things with Charles, he also sticks up for himself, stating that Charles' idea of what the event should be wasn't anything close to what he himself would have wanted. The heartfelt conversation between the two besties at the end of the night is proof that this is not the Jake Peralta fans met when the series began, but one who has taken lessons from his fianceé on how to make others happy while also advocating for one's self.

Amy, on the other hand, gets caught up in antics that prove that she's capable of some Jake-level antics. When she discovers that the lead singer of their wedding band (Blake Anderson) is a former fling of hers, Amy and her bachelorette party set out to track him down and ask them to step down from the wedding. It turns out that their relationship was a little more than a fling, and that Constantine is still in love with Amy. He was hoping to use the wedding to profess his love to her, and even made sure to include in his contract that it would cost a great deal of money for Jake and Amy to cancel the band.

And so, in a Jake Peralta-style move, Amy and her bachelorette crew (including Hitchcock and Scully) embark on a series of distractions and schemes to try and steal the contract, leading finally to Amy standing atop a bar, pouring shots for everyone, and setting the contract on fire. Of course, she falls to the ground and possibly gives herself a concussion, but at least she has something to talk about during her next game of Never Have I Ever.

Both of these plotlines would have played out far differently if this episode had happened in Season 1. But after coming around to each other's way of doing things, the Jake and Amy that fans know now are more mature and free to act however they want. Amy can embody her own version of Jake's charisma and bravery when she needs to, and Jake can utilize Amy's kindness and perseverance in his own life. They've brought out the best in each other, and their season finale wedding will celebrate one of the sweetest television love stories on TV right now.

More like this
Wait, Did Nate Actually Turn Down Being The Bachelor?
By Kadin Burnett
The New Bachelor Will Be Announced Next Week & Here Are The Top Contenders
By Grace Wehniainen
'House of The Dragon' Episode 6 Will Take Place A Decade After Episode 5
By Kadin Burnett
The ‘Emily In Paris’ Season 3 Release Date Is Here, Plus The First Footage
By Bustle Staff
Get Even More From Bustle — Sign Up For The Newsletter