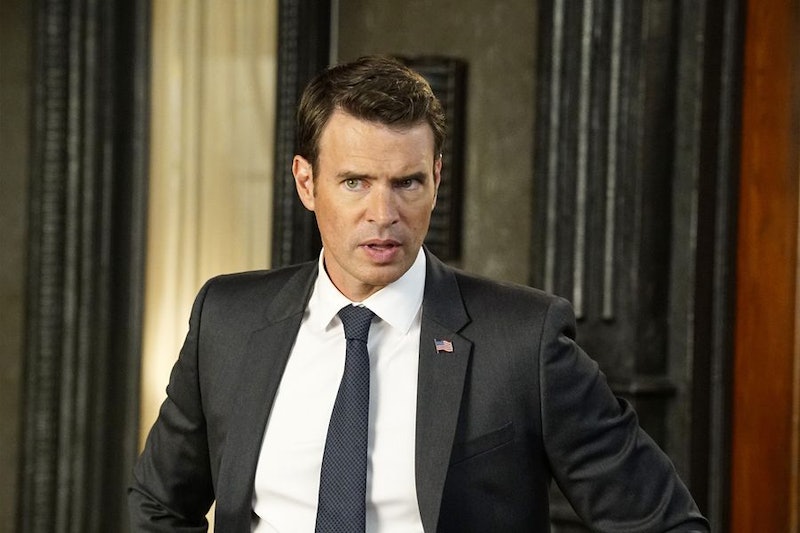 This season of Scandal has been absolutely insane so far, but it's been missing one important thing: Captain Jake Ballard. He's always been one of my favorite parts of the show, and on Thursday night's episode, he's back in a big way. Now that the scandal of Vargas' shocking death is behind us (mostly, anyway...), it's time for the next president to be chosen, and which means Mellie is still on the ballot, with Jake as her VP. But Jake's marriage to Vanessa could stop them from winning the campaign, and that's just the beginning of their issues.

But there's a major problem — the one who caused the problem was also kind of Olivia. After she and Jake go on the campaign trail together (and Jake insists that Olivia is like a sister to him, which we all know could not be further from the truth), Vanessa starts getting really suspicious of their relationship. And eventually, that lands her in a car wreck after getting drunk. So yeah, that perfect, ideal marriage that America's looking for in a VP candidate? It might not exist between them anymore.

But what's going on is way worse than that. It's not another woman who Vanessa thinks he's sneaking around with. Major plot twist, y'all: It's Papa Pope.

Oh, and he wants Jake back on B613. But that's only one of the problems Jake's facing right now, and the other is his marriage. Vanessa isn't satisfied with not knowing the truth about his past, especially the things he won't tell her about his time in the military, and this means they're constantly fighting. And since Jake barely seems invested in this relationship (which happened really, really fast last season), there's no way this would have lasted if not for Mellie convincing her that this could be the road to everything she's ever wanted.

Jake could end up being VP, but only if Vanessa keeps playing the game — and at this point, that's up to her. Is she Mellie 2.0? I really, really hope so. There aren't enough Mellies in this world as it is.