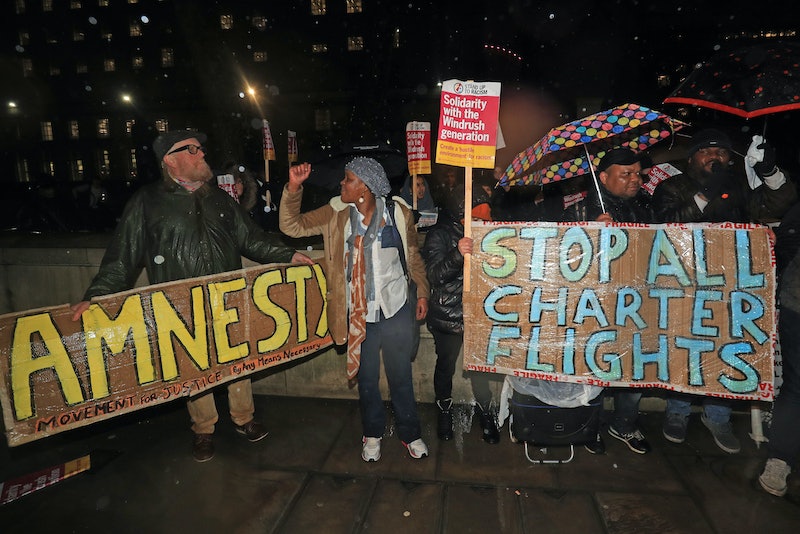 A flight deporting 17 people from the UK to Jamaica took off this morning (Feb. 11) at around 11.30 a.m. despite legal challenges being brought to the Home Office last night.

The court order in question did manage to keep 25 of the intended deportees in the UK. This came after lawyers argued that individuals facing deportation were unable to access legal advice due to problems with phone signal. According to the Guardian, there has been ongoing issues with the O2 phone network in Colnbrooke and Harmondsworth detention centres, near Heathrow.

On Feb. 9, more than 170 MPs sent a letter to Prime Minister Boris Johnson, asking him to stop the deportation until the Windrush Lessons Learned Review is published and its recommendations analysed and implemented.

The Home Office, however, has defended its decision. In a statement released Feb. 10, it said:

"The planned charter flight to Jamaica is specifically for deporting foreign national offenders. Those detained for removal include people convicted of manslaughter, rape, violent crime and dealing Class-A drugs. We are urgently asking the judge to reconsider their ruling and it would be inappropriate to comment further whilst legal proceedings are ongoing."

Many of those being deported to Jamaica, or being threatened with deportation, have been living in the UK since they were children and have families here. One of the detainees, named Tayjay, moved to the UK aged five, was a victim of county lines grooming, and served time in prison five years ago, reports Labour MP David Lammy.

According to the BBC, Duncan Lewis Solicitors were unsuccessful in challenging the high court with the argument that some of the detainees were "potential victims of trafficking, groomed as children by drugs gangs running county lines networks and later pursued in the criminal justice system as serious offenders."

This incident comes two years after the Windrush Scandal, which saw people who arrived from commonwealth countries between 1958 and 1971, and have been living in the UK since childhood, threatened with deportation and, in some cases, wrongly detained due to lack of paperwork. In April 2018, then Prime Minister, Theresa May apologised to the Windrush generation for the mistreatment a number of them faced.

Just two days before the flight, the Windrush Lessons Learned review was leaked by David Lammy. It stated the government should "consider ending all deportation of foreign national offenders where they arrived in the UK as children."

More like this
Watch Jacinda Arden’s Devastatingly Honest Resignation Speech
By Sam Ramsden
Gen Z Are Twice As Likely To Identify As Queer, According To New Data
By Sam Ramsden
Here’s Where The NHS Nurses’ Strike Currently Stands
By Sophie McEvoy
Rita Ora Finally Opened Up About Marrying Taika Waititi & Their "Perfect" Wedding
By Sophie McEvoy and Catharina Cheung
Get The Very Best Of Bustle/UK
Sign up for Bustle UK's twice-weekly newsletter, featuring the latest must-watch TV, moving personal stories, and expert advice on the hottest viral buys.