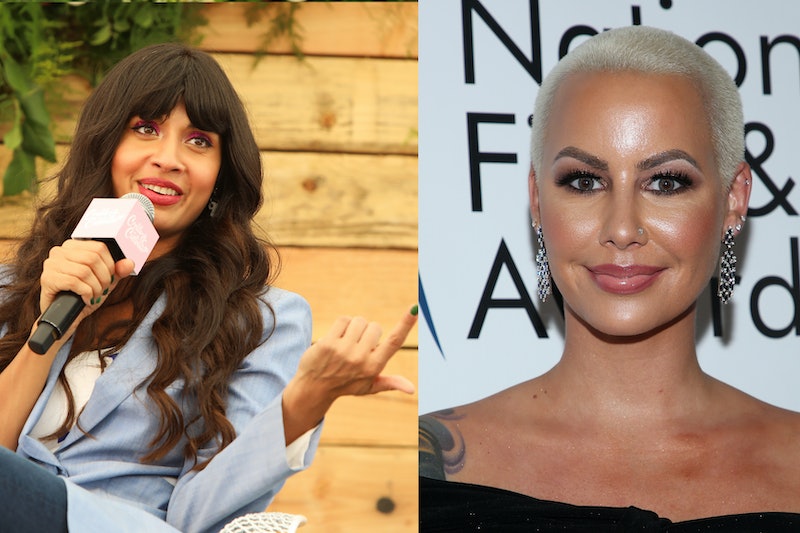 Even though people know intellectually that most Instagram posts — from the vacation pics to the #ads — should be taken with a major grain of salt, social media can still have a negative impact on a follower's self image. That's why lots of people believe that a person with a large following has a responsibility to create content that's positive, or at least not harmful. The Good Place actor Jameela Jamil has been super vocal about calling out celebrities who promote so-called "detox" teas on Instagram, which Jamil and others say can lead to disordered eating behaviors, on top of immediate effects on digestion. Now, Jamil called out model and actor Amber Rose for promoting an anti-nausea pregnancy tea, BuzzFeed reported, in a paid partnership with Flat Tummy Tea Co, which also makes "metabolism boosting" herbal blends and appetite suppressing lollipops.

In a sponsored Instagram post, Rose, who is pregnant, said: "Okay listen up @flattummyco just launched an Organic Pregnancy Tea to help us moms with those bloated, nauseous, blah feeling days! It’s safe to take while pregnant and breastfeeding." While Rose specified that the tea was not a detox tea, which is essentially a laxative, plenty of people, including Jamil, thought it was "irresponsible" to promote.

Jamil responded on Twitter by posting a screenshot of the 'gram and adding her own commentary: "FLAT TUMMY PRODUCTS FOR... PREGNANT WOMEN? Is this FDA approved? Are we... fucking... KIDDING?" Bustle has reached out to Flat Tummy Tea Co for comment, and will updated this post when we hear back.

In a second tweet, Jamil expressed her disdain for women with influence who promote unsafe products. "So many women, with such big platforms, promoting such irresponsible fuckshit, that it blows my mind."

"When supplements are endorsed by celebrities, it is important to challenge whether they are truly effective at doing what they claim to do in a safe way," Joyce Faraj, PhD, RDN, CDN, a nutritionist at Mountainside, a substance use rehabilitation center, tells Bustle. "The first trimester, which is also when nausea might be the worst, is the most delicate one in pregnancy, where the developing fetus is the most vulnerable. Due to lack of scientific evidence as to whether different herbs in the forms of tea or oils have any potential detrimental effects, I cannot endorse any of their use." Faraj also notes that, no, the FDA doesn't approve dietary supplements before they're sold, though the agency does monitor safety complaints agains them.

"In most cases, [pregnancy-related nausea] is mild and resolves with minimal intervention," Dr. Yashica Robinson, a full spectrum OB/GYN in Alabama, tells Bustle. "Patients are advised to use ginger products (ginger ale, ginger candy, ginger tea, etc.), ingest small frequent meals and initiate dietary changes (bland diet, high in carbohydrates, low in fat, without strong aromas). Patients are advised to seek medical attention if their nausea and vomiting is so severe that they cannot keep food or liquids down despite trying the aforementioned remedies."

Flat Tummy Tea Co's website says the pregnancy tea is made with all USDA-organic certified ingredients, including ginger root, rooibos tea, rosehips, lemon balm leaf, oatstraw, stevia, and natural lemon flavor. Though the pregnancy tea is not designed for weight management, unlike other products sold by Flat Tummy Tea Co, Faraj notes that it can be potentially damaging to have all of these products in one place.

"In addition to physical changes, pregnancy is also a time of many emotional changes, which to some, may feel like a rollercoaster of sensations or feelings that we may not be ready to deal with," Faraj says. "For those who have struggled with body image issues, accepting that pregnancy is temporary and our bodies are doing something amazing by creating another human should be the focus, not how our bodies look."

"The idea of striving for a 'flat tummy' goes against the idea of a healthy pregnancy," she adds.

Because herbal products are not regulated, a study published in the American Journal of Obstetrics & Gynecology recommended that healthcare professionals ask pregnant women about their use of herbal products, including teas, because the risk of herbs during pregnancy is still unknown. "Seek care from your trusted healthcare provider, as opposed to relying on information from the internet, for guidance throughout your journey towards healthy living," Dr. Robinson says.

It's a good idea to run any kind of health claim you see on social media by your doctor before jumping on board, whether you're pregnant or not. "As a rule of thumb, do not take any medications, prescriptions, over-the-counter, or herbal, when you are pregnant or breastfeeding unless approved by your doctor or midwife," Faraj says.

It's no secret that a lot of advertising is designed to make women feel bad about themselves. As Don Draper said in an episode of Mad Men, "What you call love was invented by guys like me, to sell nylons." Women are constantly bombarded with messages that they'll be complete when they have that bag, those shoes, the perfect relationship, and a flat tummy (or, no nausea). Pregnant people have enough to deal with — growing a baby, anyone? — without having to sort through potentially misleading health information and messages that they're not good enough.