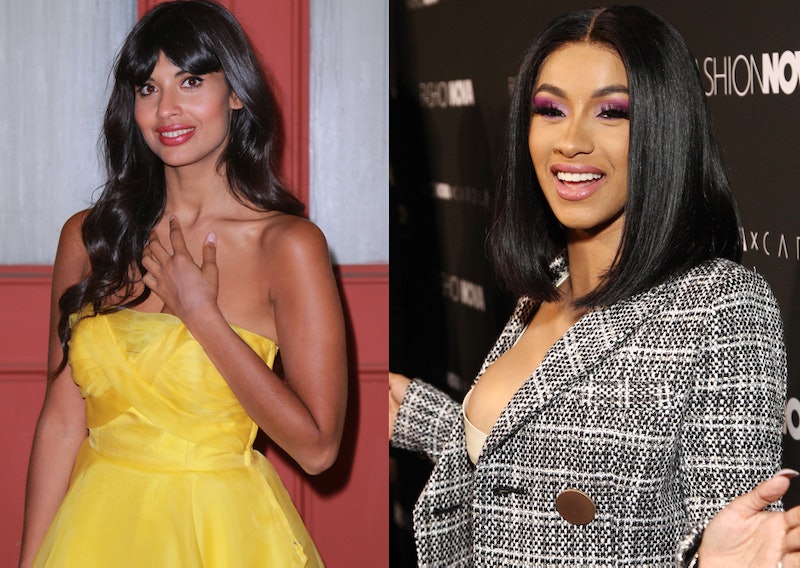 If you've spent any time on Instagram and follow celebrities, you'll recognize a certain kind of post: an image of a woman — typically, a celeb or influencer — endorsing a so-called "detox tea," often held in front of a visibly flat stomach. Actor Jameela Jamil, who says she struggled with disordered eating in her teens, has been vocal about calling out fellow celebrities who endorse these supplements.

"I was the teenager who starved herself for years, who spent all her money on these miracle cures and laxatives and tips from celebrities on how to maintain a weight that was lower than what my body wanted it to be," Jamil tweeted. "I was sick, I have had digestion and metabolism problems for life."

Celebrities like Cardi B, Kylie Jenner, Demi Lovato, and many, many more have controversially promoted these products, but the reality of detox teas can sometimes be far more dangerous than an #ad would have you believe. Teas marketed for "detox" are often regulated as supplements by the FDA, according to the Washington Post, which means their safety and efficacy hasn't been tested the way a medication would be.

Detox teas are marketed in various ways, but many of them use coded language to claim they're able to help users lose weight: FitTea says the program is formulated to "enhance your weight management program," while Flat Tummy's materials say the tea is designed to help women "get back on track, and stay on track" and "reducing bloating." (Bustle has reached out both FitTea and Flat Tummy Co for comment, and we will update this story when we receive a response.) Teen Vogue writes that the words and images used to publicize detox teas, involving healthy lifestyles, "toxins" and "wellness," are aimed at obscuring what they are: "glorified, and potentially harmful, weight loss supplements."

Jamil and health activists aren't exaggerating. Some detox teas can be dangerous, and Instagrams from celebrities promoting them are potentially harmful, experts say.

"The use of 'fitspo' images by detox tea brands sends the message … that drinking these teas is associated with health and fitness and reaching an appearance ideal," behavioral psychologist Dr. Ivanka Prichard told the Australian Broadcasting Network in 2016. In order to sell, detox teas rely on society's obsession with weight loss, and the "shortcut" they represent is one that involves serious potential damage to the liver and colon, reliance on laxative drugs, and other worrying side effects.

When teas claim to "detoxify" you, they're usually promising to influence your system through the use of laxatives. A lot of detox tea systems are designed to combine caffeine with substances that have a laxative effect. Health magazine explains that the "lighter" feeling one might get after taking detox teas is due to the fact that they "trigger a laxative effect, which causes your body to eliminate waste from your GI tract." While you may feel lighter, Health says, "your lean-to-fat ratio remains exactly the same." Caffeine is a mild diuretic too, and the end result is a system that's flushed out far too often.

If someone seems to have lost weight while using detox teas, it's most likely due to water weight through their laxative effects. "A lot of the ingredients in [detox teas] are designed to cause water loss," dietician Orla Walsh told The Independent. She explained that the results, if there are any, are due to "fluid loss and dehydration." Extensive use of laxatives of any kind can cause dehydration because the body isn't retaining enough water, with damaging effects on concentration, digestion, bowel movements, and more.

The use of detox teas for a long period, like the use of any laxatives, can mean that the body starts to need them to have a regular bowel movement — and to require higher and higher doses. "As with alcohol, the body can build up a tolerance to laxatives. Upping the dosage to achieve the same effect increases the risk," reports VICE. Naturopath Lisa Guy explained to the Huffington Post, "Your bowels can lose tone and you can become reliant on taking these laxative herbs for a bowel movement." The long-term use of laxatives found in detox teas, she claims, often does not have pretty results: it can include "stomach cramping, diarrhoea [sic], potassium and electrolyte imbalances and even nutritional deficiencies."

Further, the basic idea that the body needs any help to "detoxify" itself can be misleading. "Any tea that claims to detoxify your system is pure hype," nutritionist Karen Ansel told Self. "Your body has its own built-in detoxication system that works 24/7 — your liver, which dismantles toxins, and your kidneys, which flush out these waste products." Detox teas cannot improve the function of these existing systems.

There are two ingredients in many detox teas that medical professionals claim are particularly alarming: senna and guarana. Senna, explains Women's Health, contains sennosides, which can "irritate the lining of the bowels, triggering a laxative effect, medically approved for treating constipation and emptying the bowels before surgery." It can also cause problems with nutrition, because the body processes food too quickly to absorb their nutrients. As with other laxatives, Health explains, "excessive use can lead to potassium depletion and other electrolyte abnormalities, which can trigger muscle spasms and an abnormal heart rhythm," among other side effects. Guarana is a plant extract and tends to be highly caffeinated, which Health explains is the source of potential health effects: "nervousness, restlessness, stomach irritation, nausea, vomiting, headache, anxiety, agitation, ringing in the ears, and fast heart and breathing rates."

The risks go beyond temporary side effects. "The FDA has reported several deaths resulting from laxative tea abuse," VICE reports. Extensive laxative abuse can have ongoing, permanent damage to the liver, colon, and other areas of the body. One case from 2017 found that detox tea had caused acute liver failure in a woman after she drank it for two weeks; the doctors who treated her found that six of the ingredients in the tea were potentially "hepatotoxic," or poisonous to liver cells.

Detox teas don't exist in a vacuum. They're marketed to feed society's obsession with skinniness and weight loss as the key to "health" and "fitness" — but the relationship between weight and health is far more complicated than that, if the two have anything to do with each other at all. Being bombarded with images of thin celebrities touting the virtues of these teas simply advances the message that women must always be making themselves smaller — and that it's acceptable to put health on the line to do so. The body doesn't need the damage of laxative dependency, dehydration, and nutritional issues, and there's no such thing as "detoxifying" your system. Don't believe the hype.

Bustle has reached out to representatives for Cardi B, Kylie Jenner, Demi Lovato, Iggy Azalea, and Khloe Kardashian for comment on their past Instagram posts promoting "detox" tea. We will update this story when we receive a response.