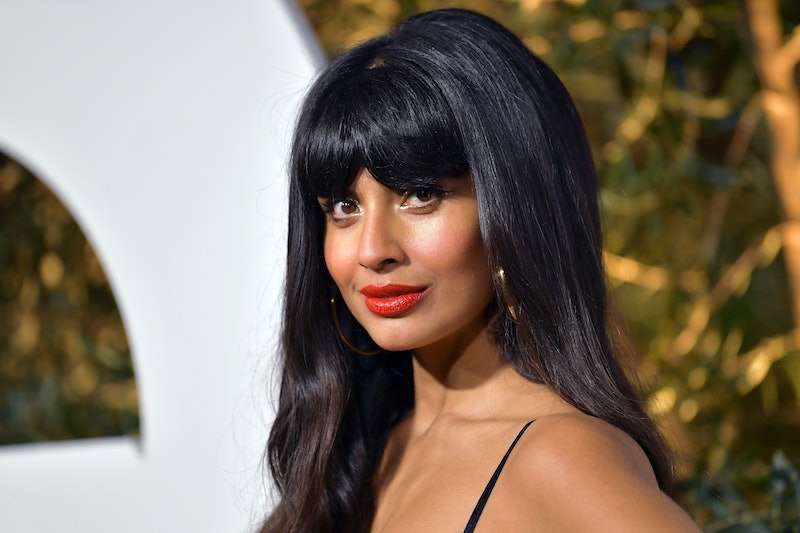 Amid Twitter backlash over her casting as a judge on HBO Max's upcoming voguing series Legendary, Jameela Jamil came out as queer on Wednesday, Feb. 5. The alum of NBC's The Good Place began a lengthy social media post by writing that "Twitter is brutal," and that it has to do with why she had "never officially came out as queer" in the past. Later in her statement, she added that this was absolutely not how she wanted to publicly reveal it, but pointed out that she'd added a rainbow next to her Twitter handle a few years ago when she felt ready to do so.

Her reticence, Jamil wrote, had much to do with that fact that "it's not easy with the south Asian community to be accepted" and that she "didn't come from a family with *anyone* openly out." Compounding her fears: "It's also scary as an actor to openly admit your sexuality, especially when you're already a brown female in your thirties."

"I always answered honestly if ever straight-up asked about it on Twitter. But I kept it low because I was scared of the pain of being accused of performative bandwagon jumping, over something that caused me a lot of confusion, fear and turmoil when I was a kid."

The second and third screenshots in her post directly addressed the negative comments about her role as Legendary's lead judge that compelled her to come out as queer. Jamil will appear on the judge's panel alongside Megan Thee Stallion, celebrity stylist Law Roach, and choreographer Leiomy Maldonado for the competition series in which "divas will battle on voguing teams called houses," performing "modern dance featuring high fashion and choreography based on poses struck by models." Filming is reportedly scheduled to begin on Feb. 6, per Jamil.

As pointed out by the Los Angeles Times, Twitter users criticized Jamil, in part, because they felt she had no connection to the LGBTQ+ community, thus disqualifying her from the job they believed should've gone to someone with experience in ballroom culture. (The Times described ballroom as an underground subculture dating back to the 1920s predominantly for black and Latino members of the LGBTQ+ community to participate in "safe space" drag competitions.)

A self-described "long time ally of the lgbtq community," Jamil acknowledged that "being queer doesn't qualify" her as a ballroom expert, but she does, however, have 11 years of hosting experience, as well as "privilege and power and a large following." She wrote that she hopes to leverage all of those things in order to bring attention to the show, and to "elevate marginalized stars that deserve the limelight and give them a chance."

Jamil conveyed those sentiments in a Feb. 4 interview with People, expressing her hope to use her celebrity to help amplify marginalized voices. As she explained to the magazine: "There's a lot of black queer and black trans people in this community, and they aren’t understood by a lot of people in this world. And the stuff that we read about in the news about them is always in a negative way, and they're sensational in so many positive ways, and to be able to show that, it's so important to me."

The actor won't be around for any more of the negativity, however, as she announced in her Twitter post that she's "jumping off this hell app for a while" because she doesn't "want to read mean comments dismissing" her sexuality. Added Jamil, "You can keep your thoughts."

More like this
Jameela Jamil Defends Sam Smith After Trolls Body-Shamed Them
By Jake Viswanath
Erika Jayne's Estranged Husband Tom Girardi Has Been Indicted On Fraud Charges
By Jake Viswanath
'RHOSLC’s Heather & Whitney Are Still On A “Friendship Break” After Season 3 Reunion
By Jake Viswanath
RHOP’s Robyn Dixon Explained Why Juan Paid For Another Woman's Hotel Room
By Brad Witter
Get Even More From Bustle — Sign Up For The Newsletter
From hair trends to relationship advice, our daily newsletter has everything you need to sound like a person who’s on TikTok, even if you aren’t.