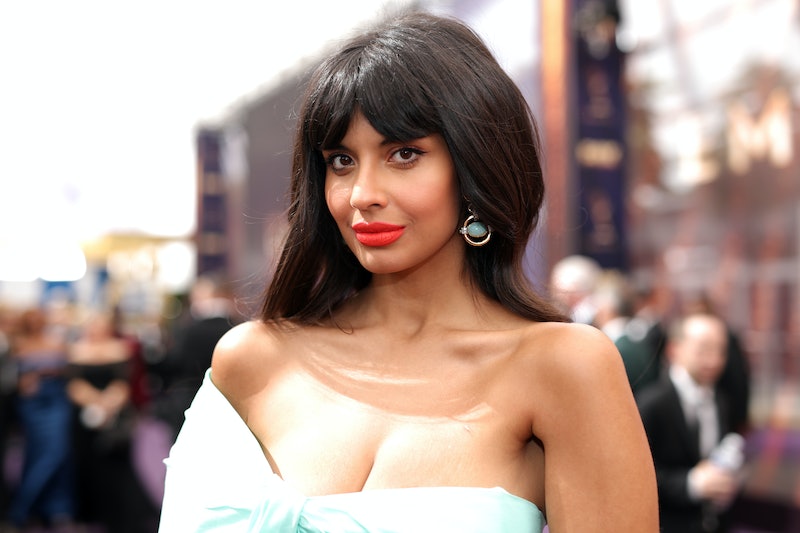 Never one to shy away from tackling topics head-on, Jameela Jamil tweeted about embracing aging over the weekend in response to a troll who called her "too old." The Good Place star's history of speaking out ranges from debunking so-called beauty norms (including refusing to be photoshopped for magazine shoots) to calling out gender double standards in Hollywood (like when Lady Gaga was blamed for Bradley Cooper's breakup). Now, Jamil is addressing ageism by tying in her own experience with chronic illness.

On Sunday night, Jamil fought back after being criticizing by a Twitter user for being "too old" to wear a certain dress. She later responded to another critical user (who has since deleted their tweet) that she felt aging was a "luxury" and that she did not care how old anyone thought she was. She wrote, in part, "Not everyone gets the luxury of getting older. And I think it’s a sacred thing that I cherish every day. My lines are my souvenirs."

Jamil explained how health struggles changed her perspective on aging, including two experiences with cancer. She tweeted:

"I would just like to say, that as someone who has been chronically ill my whole life, and had cancer twice, I find it EXTREMELY offensive that there is a cultural taboo around aging. Those of us who fight for our lives and those who lost that fight young, deserve more respect."

Previously Jamil discussed a breast cancer scare she had in 2015, per Glamour, but has yet to open up about any specific cancer diagnoses. Earlier this year, Jamil confirmed she had Ehlers-Danlos Syndrome, a rare connective tissue disorder. Individuals diagnosed with EDS typically have overly flexible joints, stretchy skin, or fragile skin which doesn't heal well, as per Mayo Clinic. Because of these abnormalities, many people with EDS struggle with dislocations, arthritis, and chronic pain.

Ehler-Danlos Syndrome is rare, but Jamil isn't the only star to publicly speak out about battling the condition. On Friday, Oct. 4, singer Sia tweeted about having EDS and struggling with chronic pain, which she deemed "demoralizing." Sia also extended a message of support "to those of you suffering from pain, whether physical or emotional."

Letting Sia know she wasn't alone either, Jamil responded to the singer's tweet by offering advice after being diagnosed more than two decades ago. The Good Place actor wrote, "Together we can raise a sh*t-tonne of awareness."

Jamil's recent string of tweets isn't the first time she's used her platform to discuss aging either. Back in February, Jamil penned an essay on unrealistic societal expectations for Allure, in which she briefly touched on how the beauty industry erases all signs of growing older. "I think it’s really sh*tty and dangerous for women in their 30s, 40s, and 50s to open magazines and see women the same age with zero flaws, zero spots, zero lines," she wrote. "No signs of gravity. No signs of weight gain. No one looks like that."

Staying true to this message, Jamil has been vocal about asking publications not to photoshop her, including calling out a recent shoot photoshoot in Entertainment Weekly for airbrushing and insisting promotional billboards for The Good Place use photos without retouching her.

Jamil has repeatedly used her platform to call out society's unrealistic standards, especially when it comes to age and appearance. Since the Good Place star is known for speaking out, this likely isn't the last she'll say on any of these subjects.

More like this
15 Offensive AF Jokes In 'Friends' That Really Aren't OK
By Tolly Wright, Bustle Editors and Meguire Hennes
Twitter Is Freaking Out Over Rihanna’s 2023 Super Bowl Halftime Show Announcement
By Stephanie Topacio Long
Alec & Hilaria Baldwin Gave Their 7th Child Another Version Of The Name Hillary
By Stephanie Topacio Long
Devi Is Going To Meet A “Smoldering Bad Boy” In ‘Never Have I Ever’ Season 4
By Jack Irvin and Gabrielle Bondi
Get Even More From Bustle — Sign Up For The Newsletter