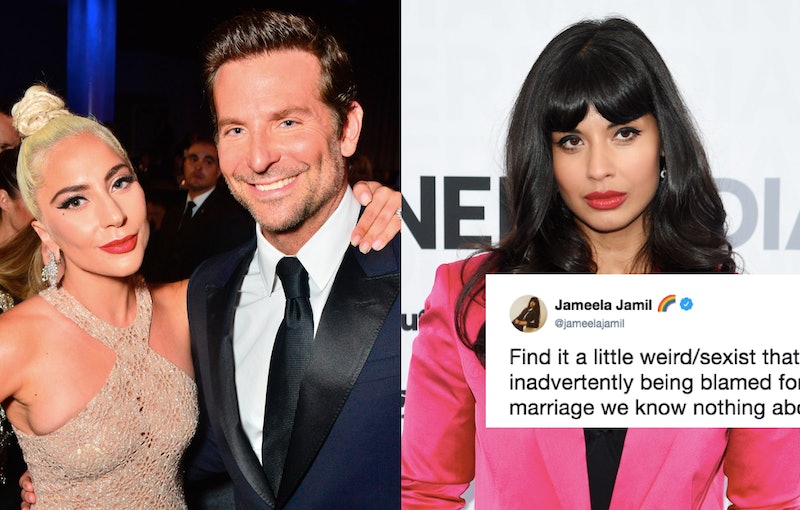 As you've likely heard by now, Bradley Cooper and his longtime girlfriend, Irina Shayk, have split up. Following reports of their breakup, the internet has taken to trying to insert Cooper's A Star is Born costar, Lady Gaga, into the narrative. But, Jameela Jamil's tweet about Bradley Cooper and Lady Gaga highlights exactly why including the singer in this breakup conversation is seriously so unfair.

Shortly after Cooper and Shayk's split was announced on June 6, the Good Place actor took to Twitter to share an unfortunate narrative that she's seen that ties back to Gaga. She wrote, complete with an eye-rolling Harry Potter GIF, "Find it a little weird/sexist that Gaga is inadvertently being blamed for the end of a marriage we know nothing about." (For the record, Cooper and Shayk were not married, but the sentiment still stands.)

Jamil makes a very important point here, as it's more than unfair to say that Cooper and Shayk's breakup had anything at all to do with his costar. Like she mentioned in her tweet, the public has no idea what led to their split. (And it should be noted, Cooper and Shayk do not owe the public an explanation for this relationship update.) So, it's a pretty major (and entirely faulty) leap that the "Million Reasons" singer's connection with Cooper is somehow behind the reason the couple broke up.

As previously mentioned, Us Weekly reported on June 6 that Cooper and Shayk, who share daughter Lea De Seine, had parted ways after four years together. “They split but she is still staying at his house for now,” a source told the publication, “It’s complicated because of the baby.” (Bustle reached out to the pair's reps for comment, but did not receive an immediate response.)

This update comes shortly after it was reported that the Hangover actor and the model had been experiencing a rough patch in their relationship, as Entertainment Tonight noted on June 5. A source claimed to the publication,

Following both of these reports, and months after Gaga and Cooper's "Shallow" performance at the Oscars had many linking the two stars together, social media users have largely been saying that the singer is the reason behind the split, just as Jamil recently noted. One person wrote that the couple broke up "BECAUSE HE'S IN LOVE WITH LADY GAGA." Another joked that the singer "stole" actor's heart from Shayk. Yet another person went so far as to call Gaga a "home wrecker."

After their show-stopping Academy Awards performance, the "Just Dance" singer appeared on Jimmy Kimmel Live! where she addressed all of those romance rumors between her and her costar. And Gaga's message not only addressed that ridiculous gossip that was dominating the internet, but it's a statement that stands true today, especially as some have come to blame her for her friend's relationship woes. Gaga said at the time,

Clearly, Gaga and Cooper formed a close connection during their Star is Born run. But, even though fans might want to link the stars together, particularly now that they've both separated from their respective partners, it's definitely way too much and way too unfair to say that their bond had anything to do with Cooper and Shayk parting ways.