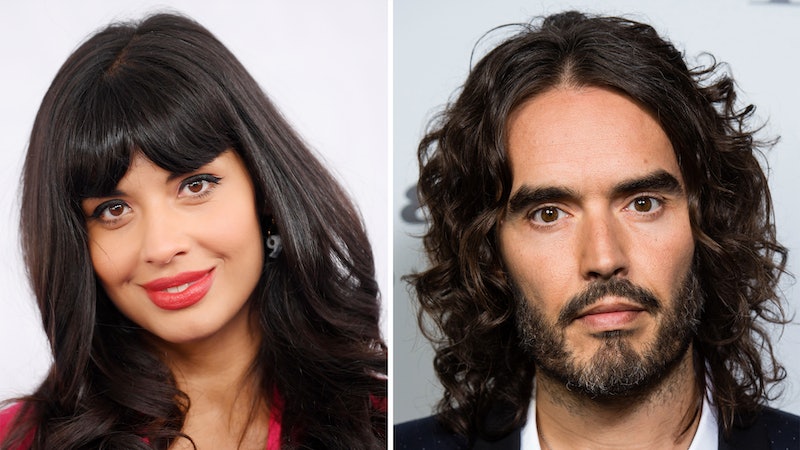 Now that celebrities feel a pressure to be "woke", more and more of them are speaking out about the still existent inequalities of the world. That's not to say that their thoughts are insincere. In fact, quite the opposite. A tweet here and an Instagram post there can raise awareness of hugely important issues, slowly making the world a better place. The latest example of this is Jameela Jamil on cancel culture.

The 33-year-old actress and activist recently appeared on Russell Brand's Under The Skin podcast. (If you've never listened, it's essentially an exploration of the truth with guests ranging from Derren Brown and Fearne Cotton to Lena Dunham and David Lynch.) Although Jamil and Brand's chat goes in-depth on many important things, a few people weren't happy with the entire premise of the podcast. Namely, the fact that Jamil had agreed to speak to a man renowned for previous bad behaviour.

Instead of shying away from the so-called controversy, Jamil, as always, addressed it head on. "Some of you are very angry I have appeared on his podcast, but I did it because I’ve witnessed a tremendous change in him," she wrote on Instagram. "I’ve watched him publicly own up to all of his mistakes, explain his mental illness, explain his behaviour to others, and use all of his mistakes as an example to help others avoid making those same mistakes."

She continued: "People with very big platforms normally just hide from their wrongs, but he’s running right at them and doing whatever he can to educate himself and other people about serious things that we all need to learn about. I believe in progress and not perfection, and I believe in the human potential for change and education, and I watch this person tirelessly try to make right what he has gotten wrong.

"If we cancel people forever, when they have demonstrated immense change and remorse, we devalue progress. It isn’t going to get us anywhere."

Jamil did add that "people who make no change and no effort can absolutely f**k off forever," continuing her praise for Brand and stating that she was "sorry" if anyone felt "triggered by [her] decision."

You know what? She's absolutely right. Cancel culture — the act of calling out someone's mistake and insinuating that they can never redeem themselves — is one of the most damaging things to ever stem from the social media generation. It dictates that it's impossible for a person to learn from their wrongs and grow. It advocates ruining someone's career over one slip-up (recently seen in the feud between beauty YouTubers Tati Westbrook and James Charles) or a rogue tweet from their teenage years.

Brand has done wrong in the past. Recently, he was criticised for his "sexist" parenting comments. In an interview with The Sunday Times Magazine, the 43-year-old said he had never spent an entire day in sole charge of his child and is "not so good" at basic activities like changing nappies. But he has arguably also become a champion of recovery, using his privileged position to do good.

A huge debate ensued over Brand's case in particular. "I don't see the evidence that he's changed and have never heard him address any of the truly toxic behaviour from his past. There is a mountain of it," one person tweeted. Another counteracted this point of view, writing to Jamil: "What a wonderful decision you’ve made. Isn’t the goal to change and grow? We all deserve second chances if we truly own our garbage & right the wrongs. That’s the whole idea in this life!"

Another commenter felt that celebrities were in a different position to most and should therefore be treated accordingly. "Honestly don’t know much about Brand but it’s iffy for me to see ‘people change’ used as a reason for keeping celebs famous (and ergo richer and more influential)," they wrote, adding: "Sure, people change, but celebrity is a huge privilege that isn’t owed to anyone. I personally don’t feel like it’s ‘cancel culture’ to not want ppl who have done toxic stuff (again, talking broadly, idk what Brand has/hasn’t done) in the public eye."

Of course, some actions, like the assault and harassment carried out by certain figures in Hollywood, can never be excused. But should a person face the same exclusion for a misuse of language followed by a heartfelt apology and evidence that they have changed? Surely not.

It is also perhaps unfair to hit celebrities harder than the average person. They, unlike others, make mistakes in the public eye where thousands, if not millions, can see them. Put yourself in the same position and you'd probably feel terrified and anxious to share or do anything.

So where does the online world go from here? Angelica Nwandu, founder of Instagram account The Shade Room, has a realistic approach. "[Cancel culture] comes from a great place," she recently toldWWD, "but what I’ve suggested is that we cancel the behaviour and not the person because it’s becoming a toxic movement. It's not allowing anyone to make a mistake."

We are all human. We are guaranteed to do wrong. But, if we are decent people, we are also guaranteed to right those wrongs. And that's why cancel culture has got to go.