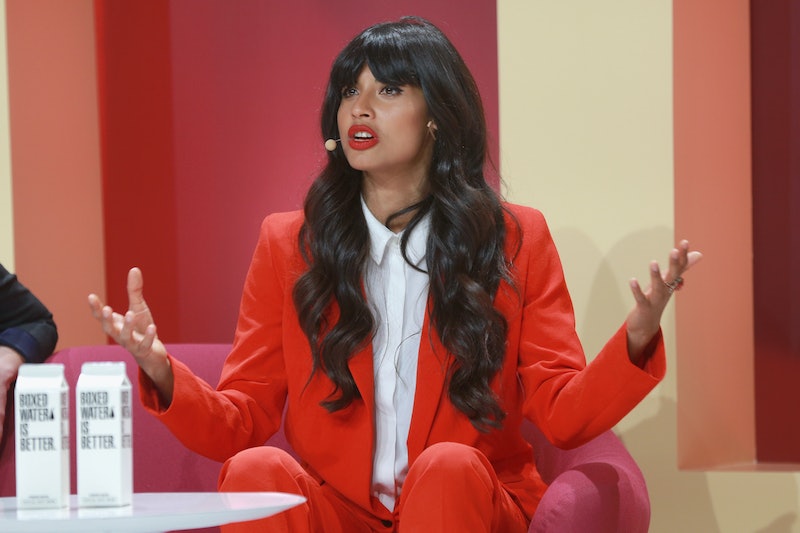 The Good Place’s Jameela Jamil is waging an all out war against the patriarchy and I, for one, am ready to join her. The former T4 presenter was recently recognised as one of BBC’s 100 Women of the Year for her acting work and for her body positive campaign @I_Weigh, which champions the idea we should “look beyond the flesh on our bones”. In recent weeks, she's taken on sponsored weight loss adverts and sexism in the industry, and she’s just penned a ferocious opinion piece for BBC. Jameela Jamil thinks airbrushing should be illegal and TBH, she puts forwards some good points.

Jamil wrote, “I would like to put airbrushing in the bin. I want it gone. I want it out of here. I think it’s a disgusting tool that has been weaponised, predominantly against women, and is responsible for so many more problems than we realise because we are blinded by the media, our culture and our society.”

She continued, “How is this ethical or even legal?”

Jamil brought up a number of reasons why airbrushing should be banned, saying that airbrushed advertisements were “a lie to the consumer,” mentally damaging to the person being edited and how it had negative ramifications on society as a whole.

She also touched on racial elements at play with airbrushing, describing how photo editors would sometimes “lighten [her] skin and change [her] ethnicity,” and also touched on how it contributed to a rise in disordered eating across the nation.

Jamil has come into her own this year as a British feminist icon and has put her money where her mouth is, talking openly on social media about her decisions to turn down airbrushing as well as makeup to cover her stretch marks on her breasts. Just yesterday, she posted an image of herself un-airbrushed and said, “Pores and lines and spots and dry lips are something kids need to see so they don’t grow up thinking there is something fucking wrong with them. I want to look like a person, not an emoji.”

She continued, “It’s sad to know a magazine would 100 percent blur all of my little lines and 'imperfections' because they would see this as 'offputting' because they don’t like human beings.”

She also added a number of shocking statistics, including NHS data that “admissions to hospitals for severe eating disorders have almost doubled over the last six years” and that “93 percent [of teenage girls and young women] think they’re judged on their appearance more than their ability.”

Jamil's comments come on the heels of over a decade of scrutiny around the use of airbrushing, now often referred to as retouching. In 2009, as the Telegraph reports, a coalition of psychologists, doctors, and academics petitioned for new rules around image manipulation, arguing that it encourages "unrealistic expectations of perfection, encouraging eating disorders and self-harm."

Jamil’s @I_Weigh campaign was launched earlier this year on Instagram, in which she encouraged people to tell the world what the weighed — trading out kilograms and pounds for the weight of their accomplishments and identity. She announced the movement on Instagram, which was posted the same week as Mental Health Awareness Week, saying “Please check out my Instagram account @i_weigh which tells society and it’s sickening emphasis on our size and age to go f*ck itself, and allows us all to take a minute to remember all the good sh*t we are and do, and how we make others feel.”

She finished, “There is enough hate in this world without us having to hate ourselves for no bloody reason too.” Preach it, Jameela. If you’d like to join the @I_Weigh movement, you can get involved by heading over to the campaign’s official Instagram.

For those who may be battling an eating disorder or know somebody who is, a charity named Beat runs a One-to-One Web Chat service if you need somebody to talk to. They also run a hotline for adults which you can contact at 0808 801 0677, one for youth at 0808 801 0711 and one for students at 0808 801 0811. Additionally, the NHS has a list of resources available and advice about setting up an appointment with a GP here.