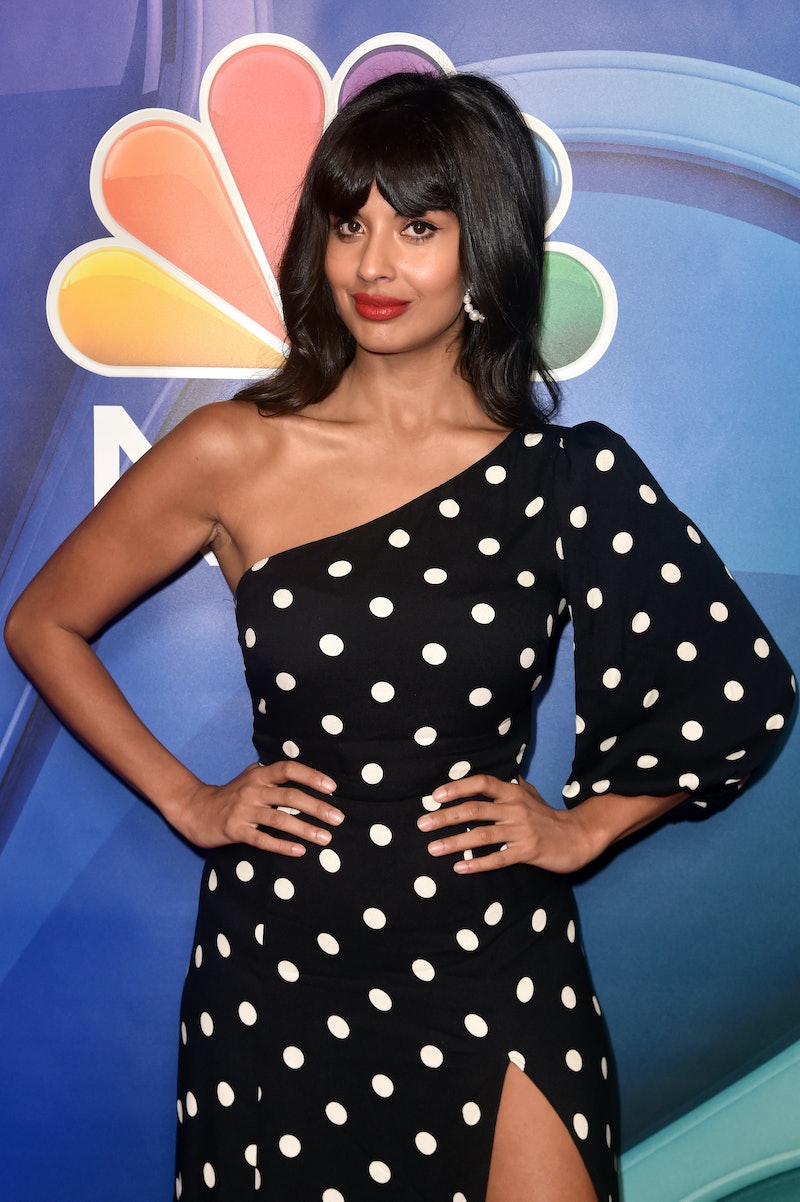 On Saturday, The Good Place star Jameela Jamil tweeted that she's over airbrushed photos. More specifically, she's tired of celebrities being photo-shopped in pictures, because in her opinion, they create false and unfair expectations for those at home. She shared all of these thoughts in her tweet, along with an un-retouched promotional photo she posed in for the final season of her critically-acclaimed NBC comedy.

Jamil wrote, "I know it’s hard because we are perpetually scrutinized and criticized in this industry, but I’m begging other influencers, actors, and models to join me in not allowing airbrushing. We have to stop setting standards for others that we ourselves don't even meet."

The actor wants more celebrities and people with influence to step forward and speak up. As individuals who are often portrayed as perfect or near to it in all forms of media, they have the power to change how society views and discusses self-esteem and body confidence. Jamil herself began that mission by sharing an un-airbrushed photo of her own.

"Finally able to INSIST my image, even on billboards isn't ever airbrushed," she continued on Instagram. "I get backfat in Every. Single. Bra. And I used to hide/bin so many photos because of “muffin tops.” Double chins/ “imperfections” because I never saw them on people on TV. #freethebackfat." She shared a closeup of her skin being pushed up and out of the back of her dress in a photo for The Good Place to illustrate her point.

She added that her contribution to the conversation is only one piece of something much bigger, but she remained proud of herself for coming forward. Jamil has lived with an eating disorder in the past, so she knows firsthand how important body acceptance is. "I’m aware this isn't some huge victory, and not 'brave,'" she wrote. "But as someone who had such obsessive body dysmorphia and was so fixated on the embarrassment of what we perceive as 'flaws' this is just a little win for little anorexic teenage me."

According to an August 2018 interview she did with the Ways to Change the World podcast, Jamil said she went three years without eating a meal as a teenager and has had issues with her weight ever since a young age. In response to the the proliferation of ads for weight loss supplements and appetite suppressing lollipops on social media, she started the I Weigh campaign. It's a campaign about "radical inclusivity," per its Instagram bio, that encourages people to focus on amplifying positive voices.

Many other celebrities have shown support for the initiative including Emmy Rossum and Meghan Markle. According to Access Hollywood, Markle reached out to Jamil personally to thank her for her work, and selected her to appear on the Forces for Change-themed September issue of British Vogue.

Markle reached out to Jamil via a phone call, and because the incoming call was displayed as a blocked number, Jamil didn't answer until after the third call. "It was outrageous, she phoned me herself on my mobile phone and I missed the call three times. They must have thought I was playing it cool," she told Access Hollywood. "At one point the Duke Harry walked in during the phone call and he said hello on the phone. It was all very surreal."

In such a short time, Jamil's outspokenness and the I Weigh campaign have already started shifting the worldwide discussion around body image. Now that it's really catching on, even more positive change is bound to occur.