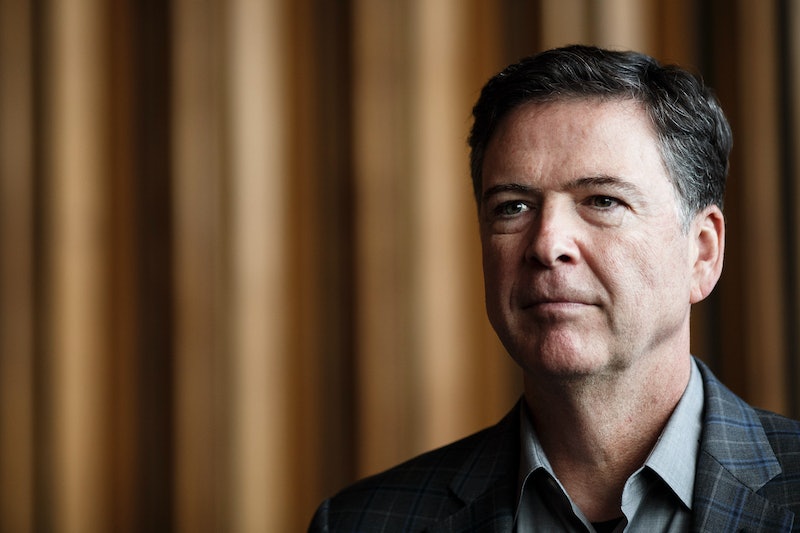 It's no secret that former FBI Director James Comey can, at least where social media is concerned, be something of a mystery. I mean, he managed to keep an anonymous Twitter account from roughly 2014 to 2017. But the tweet Comey posted after the Mueller report summary dropped has left people with a lot of, well, questions.

"So many questions," Comey wrote in a tweet featuring a photograph of him standing in a forest, looking up at the tree tops.

Earlier in the day, Attorney General William Barr had provided Congress with a brief summary of the "principal conclusions" found in Special Counsel Robert Mueller's report on Russia's election meddling. In a letter sent to Congress (and provided to Bustle by the Department of Justice), Barr said Mueller's investigation "did not establish that members of the Trump Campaign conspired or coordinated with the Russian government in its election interference activities."

The attorney general also claimed that, when it came to allegations of obstruction of justice, the special counsel had "ultimately determined not to make a traditional prosecutorial judgement." Instead, Barr said Mueller "sets out evidence on both sides of the question and leaves unresolved what the special counsel views as 'difficult issues' of law and fact concerning whether the president's actions and intent could be viewed as obstruction."

Barr told Congress that after reviewing Mueller's report he had concluded that "the evidence developed ... is not sufficient to establish that the president committed an obstruction-of-justice offense." However, he also told Congress that Mueller had noted that "while this report does not conclude that the president committed a crime, it also does not exonerate him."

Of course, it's impossible to know if Comey's tweet was meant as a response to the attorney general's summary of the Mueller report or rather a mere musing on life. The former FBI director has previously said that he didn't care if Mueller found that Trump colluded or attempted to obstruct justice.

"I have no idea whether the special counsel will conclude that Mr. Trump knowingly conspired with the Russians in connection with the 2016 election or that he obstructed justice with the required corrupt intent," he wrote in a New York Times op-ed last week. "I also don't care." Rather, Comey said he only cared that the special counsel's work "be done, well and completely."

"If it is, justice will have prevailed and core American values will have been protected at a time when so much of our national leadership has abandoned its commitment to truth and the rule of law," he continued.

Some have argued that Trump's decision to fire Comey as head of the FBI — which ultimately prompted Deputy Attorney General Rod Rosenstein to appoint Mueller as special counsel in May of 2017 — amounted to obstruction. In the nearly two years that have passed since his firing, Comey has become an outspoken critic of the president.

While the meaning behind Comey's tweet may not be crystal clear, one member of Congress appeared to use it to issue a warning to the former FBI head. "Could not agree more. See you soon," Republican Sen. Lindsey Graham tweeted in response to Comey's tweet. According to The Hill, Graham has plans to probe the circumstances of a Foreign Intelligence Surveillance Act (FISA) warrant obtained on former Trump campaign policy adviser Carter Page.