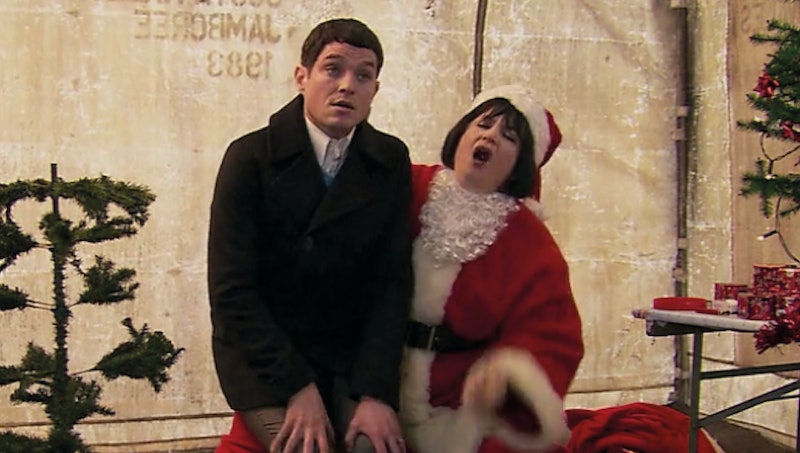 It's not Christmas without dry turkey, family disputes and, of course TV specials on the beeb. Crimbo 2019 already looks like it's on to a cracker as James Corden confirms a Gavin & Stacey Christmas special is most definitely occuring. The Late Late Show host, has been secretly dusting off his writing boots and is going back to his roots with a long-awaited return of everyone's fave British sitcom with an hour long special.

Corden took to Twitter with a picture of the script to confirm the BAFTA winning sitcom's return, saying, "Ruth Jones and I have been keeping this secret for a while... We’re excited to share it with you. See you on Christmas Day." BBC have confirmed the Christmas special stating it was "hugely excited" to see the show return to BBC One.

Gavin & Stacey was co-created and co-written by Corden who plays Smithy, alongside Ruth Jones who plays Nessa Jenkins in the show. It follows Gavin (Mathew Horne), and Stacey (Joanna Page) as they hilariously navigate a long-distance relationship between Barry in South Wales and Essex. And the four will all be returning for the Christmas special alongside Larry Lamb, Rob Brydon, Melanie Walters, and Alison Steadman.

In a joint statement shared to the BBC, Corden and Jones said: "Over the last ten years we’ve talked a lot about Gavin and Stacey — where they might be today and what their lives might look like. And so in secret we took the plunge and wrote this one hour special. We’ve loved revisiting Barry and Essex again and bringing the characters back together has been a joy. We’re so excited to get the chance to work with our fabulous cast and crew once more and to give fans of the show a festive treat this Christmas. Thank you BBC for helping to make this happen.”

The show, which was one of the most popular hits on BBC3, started back in 2007 and ran until 2010 sweeping up awards along the way including the British Academy Television Awards (BAFTAs) and British Comedy Awards. There have been three seasons and a Christmas special previously, but fans are still gagging for a follow up. Although there have been spin offs in the past like Smithy for Comic Relief and even Fox’s American adaptation that didn't quite make it to TV, nothing beats the original.

The director of BBC content, Charlotte Moore said: "We can't wait to see what's happened to everyone over the last nine years, and what's next for one of the nation's favourite comedy families." The show ended in 2010 with Smithy crashing Nessa's wedding, begging her not to marry Dave, and then hopped 6 months showing a very pregnant Stacey. So it looks like Gavin & Stacey could pick up 9 years later perhaps with some children added to the cast.

Although Corden has been adopted by Hollywood and is the poster boy for all things showbiz at the moment, it's great to see him return to where it all started for him. Christmas Day just got a whole lot funnier.

More like this
'Blue Story' Fans Will Recognise 'The Confessions Of Frannie Langton’s Karla-Simone Spence
By Maxine Harrison
Owen Warner's Net Worth Might Surprise 'I'm A Celeb' Fans
By Sam Ramsden
Our First Look At 'Vardy V Rooney: A Courtroom Drama' Doesn’t Disappoint
By Bustle UK
'Gilmore Girls’ Lauren Graham Just Revived Our Hopes For A New Reunion
By El Hunt
Get The Very Best Of Bustle/UK