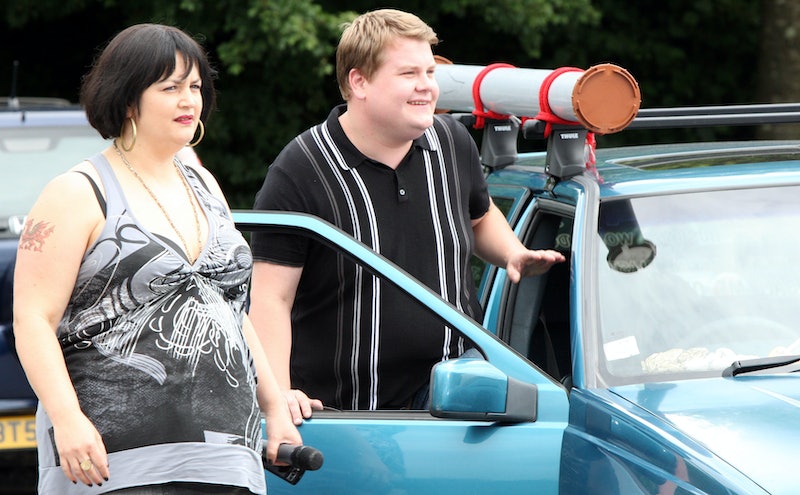 One of the best things about Christmas 2019 was the return of Gavin & Stacey. Ruth Jones and James Corden may have taken a ten-year break, with the last episode of season three airing in January 2010, but the iconic series was welcomed back by fans with open arms. As we all know by now, the Christmas special was left on the cliffhanger to end all cliffhanger, but James Corden has now said there are "no plans" for another series right now.

Swapping Smithy’s tracksuit for a dapper two piece, Corden walked the red carpet at the 92nd Oscars ceremony on Feb. 9. After the success of the Christmas special and that ending, fans have been dying to know if the cast will be returning to Barry Island for another series. However, he told the BBC, “I'm being completely honest, there are no plans to do any more because a lot of it is about time and distance. I think Ruth [Jones, his co-writer] and I, if we ever were going to do any we approach it in the same manner we did the last one to try and just do it on our own and see if we felt we had something that wouldn't ruin it.”

Wanting to quit while they’re ahead is definitely a smart move but what happens to Nessa and Smithy? Corden said fans might never find out. "It's all well and good people saying that they would like another one, and that is hugely flattering, but they only want one that doesn't tarnish it in any way," he said. "So, we're going to really try our best to give it some thought at the least, but there’s no plans – as it stands right now – to ever make another one."

According to the Guardian, 11.6 million people tuned Gavin and Stacey on Christmas Day, making it the most-watched scripted TV programme of the year. Corden wrote the original series and 2019's one-off special with Ruth Jones who has previously shared the same sentiment as Corden on whether or not the show will return. Speaking at the National Television Awards she said, "We don't have any plans at all. That's the truth. We still have the same situation, which is that James and I live on different continents, so getting together to write is very difficult, so who knows? At the moment there are no plans."

More like this
Twitter Simply Couldn’t Cope With The ‘Happy Valley’ Finale
By Sophie McEvoy
9 Times Catherine Cawood Was An Absolute Badass In 'Happy Valley'
By Sophie McEvoy
'Happy Valley' Recreated This Moment From S1 In Its Penultimate Episode
By Sophie McEvoy
Turns Out George Clooney Is A Huge Fan Of This Classic British Game Show
By El Hunt
Get The Very Best Of Bustle/UK
Sign up for Bustle UK's twice-weekly newsletter, featuring the latest must-watch TV, moving personal stories, and expert advice on the hottest viral buys.