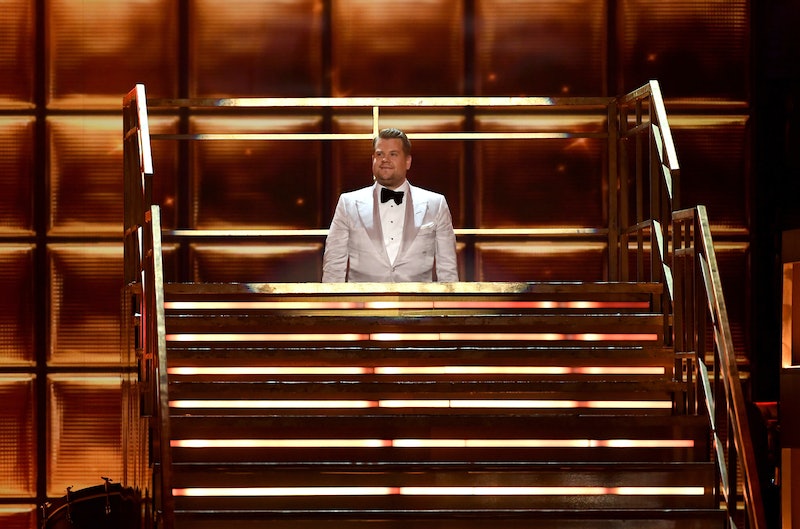 James Corden is a jack (OK, a James) of all trades, and I knew when it was announced that he was hosting the Grammys that he would have one hell of an opening. In fact, James Corden’s 2017 Grammys opening rap showed that he has the chops to take home one of the coveted trophies himself. Corden has shown off his singing, acting, and writing chops on his Late Show on CBS, creating skits like the uber-famous “Carpool Karaoke” (the one he did with Adele has nearly 150 million views on YouTube, so it’s safe to say it’s a hit), and he took all of those talents and brought them to the Grammys opening with a rap detailing the night’s events and all of the famed performers in the Staples Center in Los Angeles.

The whole bit started off with Corden falling down the stairs on stage (I got scared that that part wasn’t a bit, but it’s OK), and he called it out in his rap.

“Look around you tonight and realize your fate

Was destined for Grammys no time for mistakes

I came in real late

This was my big break

It still can be great

Adele kicked it off

I fell down the stairs

And I knew all along

I’m in over my head

I’m just not that strong

A hiccup a cough

Let’s save at all costs.”

Then, Corden paid homage to all of the important artists in the room.

“This room is insane

Some of the faces

The queen is here, dummy

With twins in her tummy

Who the hell is that

Each can win eight

They sound good together

I think they should date.”

A little awkward there, Corden, seeing as Drake may be with Jennifer Lopez now, but hey, it’s a little bit of comic relief. Corden continued shouting out the performers at the 2017 Grammys and also those who could no longer attend.

“Gaga is here to rock with her band

Where else could you see all the things that we planned?

All of these singers and rappers with bars

Chance from Chicago, Bruno from Mars

You bump them with ear buds and blast from your cars

But only one night can hold all these stars

The music they made was clearly a gift

Leonard Cohen and Prince were legends in life

Be honest with me when you were a kid

Did you ever have dreamed you’re invited to this?

Wishes came true, we celebrate you

You gotta be thankful that this what you do

Live it all up because this is the best

And with President Trump, we don’t know what comes next.”

Bit of political humor, there – it’s no surprise, seeing as most of the award shows this season have had political speeches, and Corden is entitled to it, too. Then, he jumped into the big finish.

“We sit here tonight no matter our race

Or where we were born or color of face

We using this art remembered forever

We can survive by sticking together

The passion, fashion, the voice, and the soul

Talent and Khaled, the drums on a roll

Glam and the fans, all part of the scene

I’d say that Corden’s Grammy-hosting gig is already off to a great start.