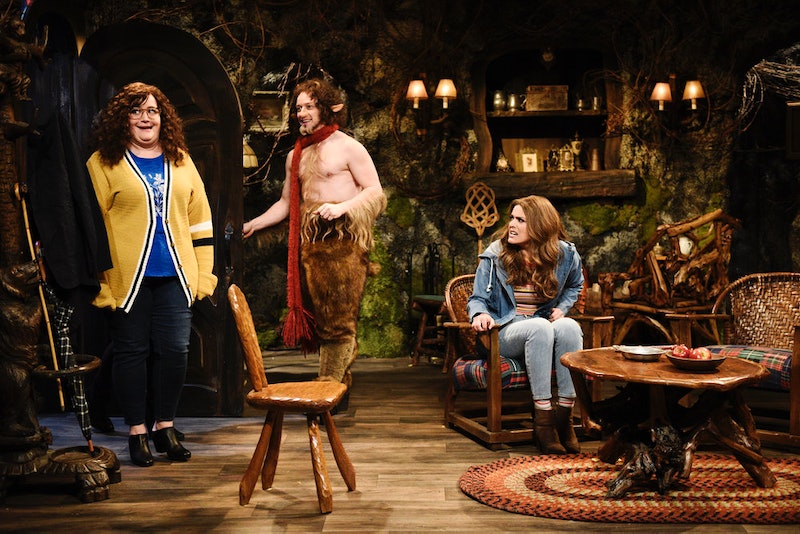 James McAvoy has built up a pretty impressive roster of film roles over the past two decades, and paid tribute to one of his earliest roles thanks to a Narnia sketch on Saturday Night Live that showed the actor donning some furry legs that he hasn't worn in a very long time. From re-defining the role of Professor X in the X-Men franchise and creating the instantly iconic role of Kevin and his 23 distinct personalities in Split and Glass, there are plenty of roles in McAvoy's history that he could've brought back for his first time hosting Saturday Night Live. And yet, fans may have been surprised to see that McAvoy opted to bring back a role that he hasn't portrayed in nearly 14 years — the faun Mr. Tumnus that he first portrayed in The Chronicles Of Narnia: The Lion, The Witch, and The Wardrobe back in 2005.

While James McAvoy carries a great deal of box office weight and is more often than not the top billed actor in any of his films, many people's first exposure to the Scottish actor was in a relatively minor, but absolutely crucial, role as Mr. Tumnus in the first Narnia film. The sketch points out that while Mr. Tumnus may have been intended as merely a friendly goat-man, for a certain group of Narnia fans, McAvoy's performance as Mr. Tumnus may have led to some of the movie's fans getting a crush on a character that is, undoubtedly, cinema's hottest-ever goat man.

The sketch features Cecily Strong, Kate McKinnon, and Aidy Bryant as three women whose entire aesthetic is described as "lazy Hermione" who rented an AirBnB with a magical wardrobe and end up at the home of Mr. Tumnus and talk to the man-goat that first taught them what it was like to be attracted to a man and, in a way, what it was like to be attracted to someone who is part-goat. The women very quickly go from polite to profane when they start making sexual advances on Mr. Tumnus, only for the faun to reveal that he's already in a relationship with Narnia main character Edmund. In the end, the women all decide that if they can't have Mr. Tumnus they can move on to another surprisingly hot figure from a childhood fantasy franchise — Neville Longbottom.

While this sketch allows Strong, McKinnon, and Bryant to directly confront the strangely hot Mr. Tumnus, the idea of exploring adolescent attraction through fictional characters is hardly new territory for the comedians. Earlier in their SNL tenure, the three collaborated alongside Vanessa Bayer and Elizabeth Banks on the music video sketch "First Got Horny 2 U" which showed some of the performers sharing their attraction to characters such as Mr. Sheffield from The Nanny and "the cool teen son" from the television show Dinosaurs. It seems that given the opportunity to dive into an actor's former roles, the current cast of SNL has a special interest in characters that meet in the intersection of childhood entertainment and sexual attraction.