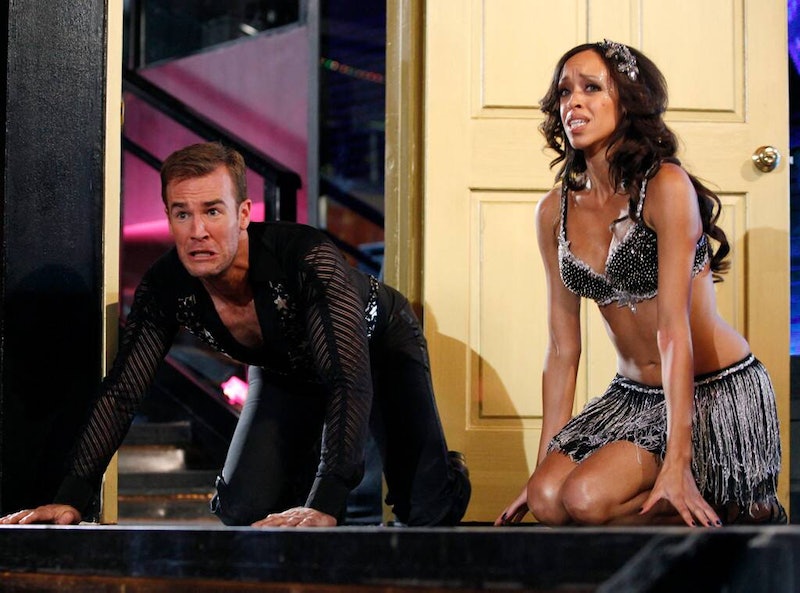 While Dawson's Creek fans are likely excited to see James Van Der Beek on Dancing With The Stars this season, it's also a pretty hilarious casting move. True television aficionados will recall that James Van Der Beek's DTWS arc on Don't Trust The B In Apartment 23 lasted over the course of two seasons and ended in straight up disaster and humiliation. Hopefully he can redeem himself this time around.

ICYMI: the Varsity Blues actor played a heightened version of himself in the short-lived but well-loved ABC sitcom circa 2012. He was the titular B's Chloe's best friend, and the series covered all sorts of wacky celebrity woes with his "character" — from planning a Dawson's Creek reunion to the politics of People's "Sexiest Man Alive," and staying relevant by launching a clothing line. In real life, Van Der Beek has never tried to sell an embarrassingly tight pair of jeans with the slogan "put your cheeks in a Beek," or tried to claim the sought-after People magazine title. The actor has four kids with his wife Kimberly Brook, and a personal life that is decidedly quiet compared to that fictionalized persona. Going on DWTS this season is the only time that something from Don't Trust The B has actually come true.

"The Apartment 23 version of me is kind of an attention whore" Van Der Beek told E! in 2012. "He gets offered Dancing with the Stars and immediately he takes it incredibly seriously." The DWTS arc spanned both two seasons, as it was fictional James' biggest career goal — as well as biggest defeat. Despite his enthusiasm, the character's time on DWTS was a complete travesty that ended in an on-stage meltdown and days-long bender.

Hopefully, seven years later, Van Der Beek can vindicate his fictional past. But let's take a walk down memory lane to remember the history that he hopefully won't repeat.

June is a normal person compared to her roommate Chloe, and normal people's parents love to watch Dancing With The Stars. James and June's mom started a secret friendship based on her DWTS expertise. It culminates in betrayal when June's mom flies to see James at the premiere rather than visit her daughter in New York City.

Face Off Against Dean Cain

A whole subplot in the Season 1 finale centers on James flying to Los Angeles to make sure his dressing room is bigger than Dean Cain's dressing room. Cain is his biggest competition and therefore nemesis on DWTS. The two are also competing against Fred Savage, though unfortunately Savage does not make a cameo.

The next challenge is getting the right partner. James was initially paired with a hot mess pro dancer, played by Missi Pyle. June's mom helps James get rid of her and lands the no-nonsense Valentina, played by Karina Smirnoff, a real DWTS pro dancer and winner.

In the Season 2 episode "Bar Lies," James finally goes on the show (start the clip above at 00:55) — but the Chinese tea that June's mom gave him to calm down accidentally makes him hallucinate and freak out. His trophy dreams come crashing down in an instant.

At the end of the episode, a Marvel-esque credits sequence allowed Smirnoff and Van Der Beek to break the fourth wall and do the performance again in full. "Hope you've enjoyed this episode of Apartment 23," Van Der Beek says, sitting in an arm chair á la Masterpiece Theatre. "Because I didn't. Do you have any idea how hard I had to work to learn that dance routine? And the producers cut it down to what, like, 20 seconds? No way. Not on my watch.”

Going On A Bender

The arc didn't end there — the following episode was all about James going on a weekend bender in the Hamptons to escape his "DWTS PTSD" and potential career downfall. The writers really made the most of those dance lessons by having James and June's friend Mark drunkenly do the routine yet again at a party.

Van Der Beek pitched this Don't Trust The B storyline himself, per E!, and the way it played out makes it clear that, even though he didn't win, he really does love to dance. Now, in 2019, Van Der Beek can put those skills to work and put his fictional self to shame. His DWTS domination is clearly a long time coming.

More like this
At 28, Debra Jo Rupp Was Living A Much Different '70s Show
By Grace Wehniainen
Twitter Can’t Make Up Its Mind About Ekin-Su’s 'Dancing On Ice' Skate-Off
By Sophie McEvoy
Twitter Is Saying The Same Thing About Ekin-Su’s 'Dancing On Ice' Debut
By Sophie McEvoy
'Bachelor' Star Cassie Randolph’s Sister Is In The 'Yellowstone' Spinoff '1923'
By Grace Wehniainen
Get Even More From Bustle — Sign Up For The Newsletter
From hair trends to relationship advice, our daily newsletter has everything you need to sound like a person who’s on TikTok, even if you aren’t.