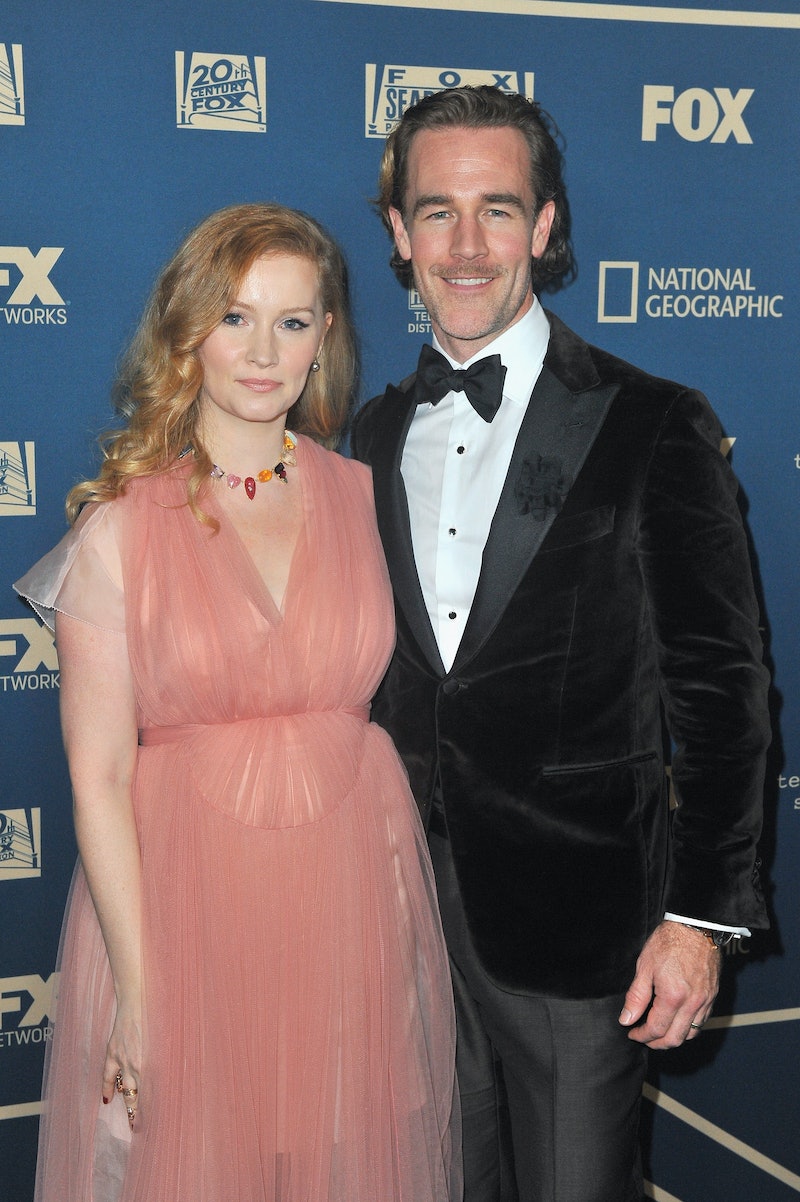 If you're watching this season of Dancing With The Stars, chances are at one point you'll ask yourself, "Who is that women who can't help but smile every time James Van Der Beek hits all of his foxtrot steps?" While the former Dawson's Creek star is sure to have loads of people rooting for him, the correct answer to that question is most likely going to be: Kimberly Brook, James Van Der Beek's wife.

The Varsity Blues star announced his marriage to Brook on their wedding day in 2010, tweeting out that it was the best day of his life so far and that he looked forward to "earning her for the rest of [his] life." The two met in Tel Aviv, and according to Van Der Beek's Instagram, the actor "knew [they] were going to get married," about 4 days after they met.

Since then, the two have documented their marriage and the growth of their family on social media. While Van Der Beek is going to be the one on the dance floor, DWTS fans know by now that if someone with a spouse turns up on the show, at least one emotional dance number is going to be dedicated to them as some point in the series — assuming he lasts past the first couple episodes, of course. While Brook will likely be present (or at least mentioned) on DWTS as Van Der Beek's wife, there's a lot more to her life than simply being married to Dawson.

She's Passionate About The Environment

Brook is not shy about sharing her views on the environment, or her political views in general. She's long been an advocate for saving the Amazon rainforests, and raising awareness about killer chemicals used in local schools and parks.

She Believes In Holistic Living

In her Instagram bio, Brook states that she's interested in "holistic healing and living," which comes up time and time again throughout her timeline. Brook is into green smoothies, crystals, and has formed a kinship with Anthony William, the Medical Medium, even going so far as to conduct an interview with him on Facebook Live.

She's A Mother Of Five

Brook and Van Der Beek's youngest child, Gwendolyn, was born just last year. Their other children are Emilia (3), Annabel Leah (5), Joshua (7), and Olivia (8). Most of Brook's social media presence is dedicated to documenting her children, and with such a large group of kids there's not shortage of excuses to play dress up or have a fun family day.

Dancing With The Stars fans may only know Brook for her relation to James Van Der Beek, but her online presence shows that there's much more to her life than just being Dawson's wife. Who knows, maybe one day her position as an holistic influencer could lead to her taking to the DWTS stage herself.

More like this
Paris Hilton & Carter Reum’s Relationship Timeline Includes A Surprise Baby Boy
By Bustle Editors
Pamela Anderson’s Dating & Marriage History Could Be Its Own TV Series
By Jake Viswanath
Hilary Duff's Husband Matthew Koma Has Her Name Tattooed On His Butt
By Jake Viswanath and Stephanie Downs
Megan Mullally & Nick Offerman’s Relationship Includes Several Collaborations
By Caitlin Gallagher and Brad Witter
Get Even More From Bustle — Sign Up For The Newsletter
From hair trends to relationship advice, our daily newsletter has everything you need to sound like a person who’s on TikTok, even if you aren’t.