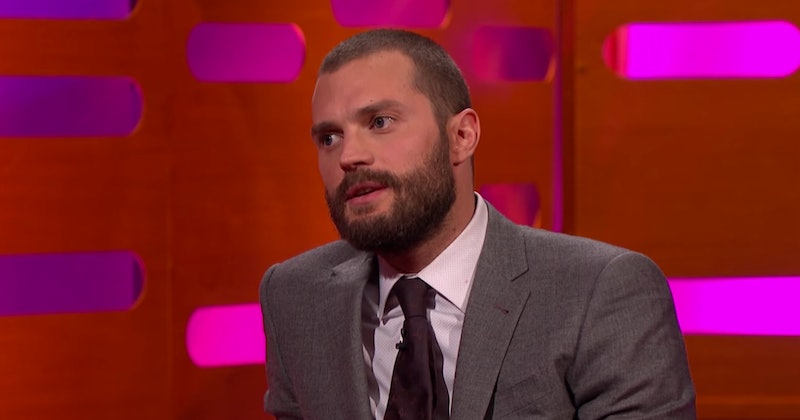 Most sex scenes are pretty serious, and for good reason. Arguably, if it's a non-pornographic movie, these scenes shouldn't be there just for the hell of it: They should be driving the story forward, or giving us background or emotional depth. So, Jamie Dornan's story about his sex noises in Fifty Shades Darker took me by surprise. Behind these scenes showing two excessively good-looking people making doe eyes at each other and pushing each other's boundaries, there are some very silly noises happening. Dornan appeared on The Graham Norton Show on Friday, where he emphasized that yes, there is a bunch more sex in the Fifty Shades sequel. "More sex?" laughed Norton, before quipping, "Jamie doesn't speak."

"I make noises... American-accented noises throughout," Dornan responded and this felt like a joke — until it wasn't. After Keanu Reeves, who was also on the show, dug deeper about what the director expects in terms of noises in this scene, Dornan opened up. Like, a lot. He said,

“There’s some scenes where they will play music… If it’s a wide shot, if it’s the closest, we get to going for it in one piece and they’ll play music. And my temptation is to always try and make Dakota [Johnson] laugh. So I’ll do things like, when there’s a moment when I’m meant to orgasm, I’ll be like 'doodle-le-do-de-do!' It’s like when a Ryanair flight lands.”

I've never worked in film, so I never knew anything about how they shoot sex scenes, but the playing music detail felt interesting. It seems like a smart way to let the actors loosen up a little in what is presumably one of the most awkward parts of working as a thespian, surrounded by a whole bunch of people in production.

Though snaps to Johnson for being able to keep a straight face while her supposedly sadistic lover makes that cut-price British airline noise (for reference, one that sounds shortly after the plane hits the runway and comes to a stop) when he should be jetting his juice. Though, this said, it's hard to quibble with Dornan's accuracy, since that's the closest mechanical equivalent to the male orgasm. One moment, you're flying high; the next, the show's over.

Now is a good time for everyone to take a moment to thank whatever deity you pray to that you and your loved ones work a job where making nice with your coworker (probably) doesn't involve making funny orgasm noises.