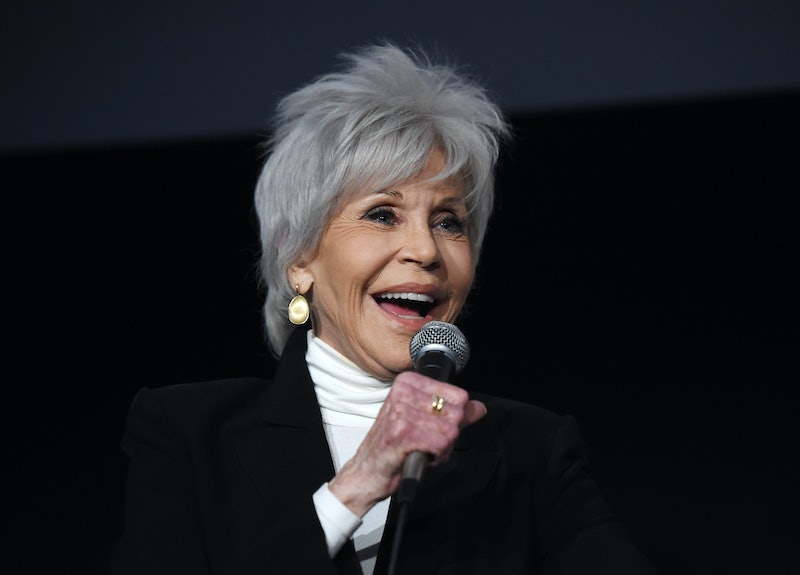 The protests against the death of George Floyd, an unarmed black man, after white police officer Derek Chauvin pinned him to the ground have forced the world at large to reassess their privilege, specifically as it concerns race relations in the U.S. To that end, Jane Fonda spoke about white privilege in support of Black Lives Matter protests during an interview with CNN on Sunday, May 31. And she called on white people to educate themselves and join the fight.

During the interview, Fonda addressed how white privilege is keeping racism in government systems alive. “Because we’re white, we have had privilege,” she said. “Even the poorest of us have had privilege. And we need to recognize that, and we have to understand what it is that keeps racism in place — the policies, redlining, banking policies, mortgage policies. All of the things that are really making it very, very difficult for black people to lift themselves up."

In order to make effective change, Fonda explained that white people must begin to recognize their own privilege and use it to advocate for change at the highest level, adding that she herself has been studying the history of racism with new focus for the past three years, following the election of Donald Trump. "The policies have to be changed, and then white people have to understand the history that has led to this and we have to try to change within ourselves," she said.

The legendary actor has long been a strong activist against issues like police brutality and systemic racism, dating back to the '70s. As pointed out by Rolling Stone, Fonda wore a black sweater and black beret during the interview, a nod to the uniform of the Black Panther Party, of which she has been a prominent supporter. (Her look had many on Twitter urging white women to be a Jane Fonda, not a Karen.) In 1982, Fonda adopted Mary Williams, the daughter of two Black Panthers who could no longer care for her. Williams later became an activist herself.

More recently, Fonda has been making headlines for her dedication to environmental issues, getting arrested numerous times at protests in Washington D.C. She's now expressing the same vigilance when it comes to protests of George Floyd's killing, encouraging people to focus on the cause rather than the riots that are happening as a result. "I think it's important for us to recognize that media cameras may be focused on the breaking of windows and the burnings and fires, but the vast majority of people, at least in the cities where I've talked to people and from what I've seen on TV, is non-violent," she said.

More like this
"Lavender Haze" Star Laith Ashley Breaks Down Filming With Taylor Swift
By Jake Viswanath
Kim Petras Just Made Grammy History
By Jake Viswanath
Ozzie’s Coming Out Scene With Kitty On 'That ’90s Show' Has Twitter Sobbing
By Brad Witter
Paris Hilton & Carter Reum’s Relationship Timeline Includes A 2023 Grammys Date Night
By Bustle Editors
Get Even More From Bustle — Sign Up For The Newsletter
From hair trends to relationship advice, our daily newsletter has everything you need to sound like a person who’s on TikTok, even if you aren’t.