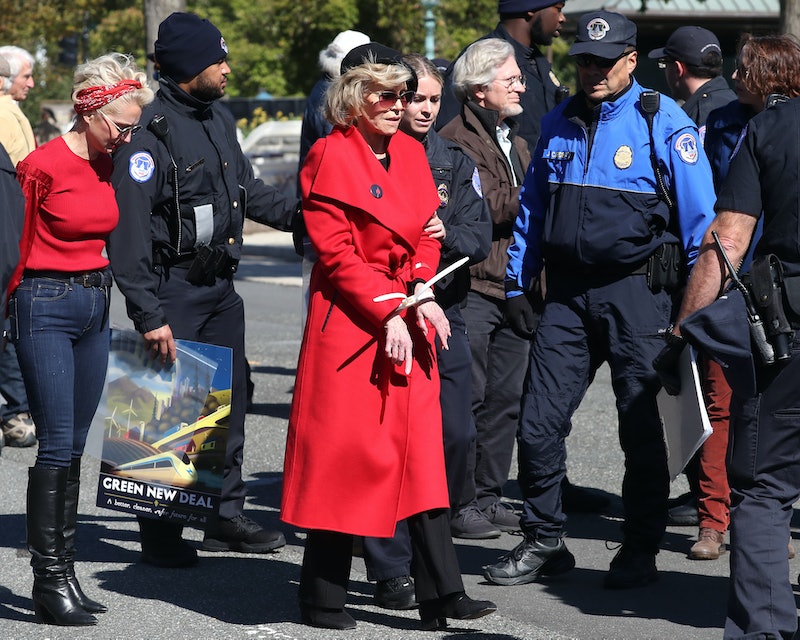 As part of her movement called "Fire Drill Fridays," Jane Fonda was arrested for the second week in a row during an Oct. 18 climate change protest in Washington, D.C. The actor and her Grace and Frankie costar Sam Waterston were among 17 individuals taken into custody by Capitol police for allegedly unlawfully demonstrating, Capitol police Eva Malecki spokeswoman confirmed to The Hollywood Reporter following the arrests. Malecki added that all were charged with crowding and obstructing or incommoding.

Fonda was also among the 16 people arrested outside the U.S. Capitol building on Oct. 11, again for alleged unlawful demonstrating, per THR. The cause she's been championing: a Green New Deal, which is a Congressional proposal for comprehensive legislation about climate change. The 81-year-old actor explained on her website that she will be "on the Capitol every Friday, rain or shine, inspired and emboldened by the incredible movement our youth have created."

Following her Oct. 11 arrest, Fonda blogged about the experience on her website. She explained that they were put in white plastic "handcuffs" and taken to a nearby police station "for a few hours." The Oscar winner added they were all divided into two cells with the doors left open, and were released after each paying a $50 fine. "The plastic handcuffs hurt more than the metal ones," she blogged, adding, "and I discovered that it's not easy for an 82-year-old to get in and out of a police paddy wagon without the use of her hands." (Fonda will turn 82 in Dec.)

She added that the idea for "Fire Drill Fridays" came to her over a Labor Day weekend trip to Big Sur, California with "pals" Catherine Keener and Rosanna Arquette. Fonda also credited Naomi Klein's On Fire: The (Burning) Case for a Green New Deal for alerting her to "the urgency of the situation." Quoting Greta Thunberg's speech in front of Swedish Parliament, Fonda wrote, 'This is a crisis. We must act as if our house is on fire… because it is.'"

One day before their arrests, Fonda and Waterston hosted a Facebook Live "teach-in" about the Green New Deal. Fonda called the proposal "bold, expensive and far-reaching," noting it would "end our dependence on fossil fuel" and "on the exploitative, extractive mindset that has brought us to this point of unsustainable inequality. She added: "It's not just nature that's being destroyed, it's our Democracy and the two crises are interconnected. One will not be solved without the other."

The actor is far from the only celebrity bringing awareness to climate change. In partnership with Woody Harrelson, Billie Eilish released a video about climate change, called "Our House Is On Fire" on Sept. 28. She declared a #ClimateEmergency, and encouraged viewers to take action, in the clip. A note beneath the video reads: "Our earth is warming up at an unprecedented rate, icecaps are melting, our oceans are rising, our wildlife is being poisoned and our forests are burning. [T]he clock is ticking."

After decades of activism, Fonda seems to be showing a new generation of leaders how to lead the charge in defense of the planet.

More like this
Man Meets Politics: ‘Boy Meets World’ Star Ben Savage Is Running For Congress
By Jake Viswanath
Meghan Trainor & Daryl Sabara Are Expecting Their Second Baby
By Jake Viswanath
Pamela Anderson’s Dating & Marriage History Could Be Its Own TV Series
By Jake Viswanath
Everything To Know About 'The Real Housewives Ultimate Girls Trip' Season 4
By Jake Viswanath
Get Even More From Bustle — Sign Up For The Newsletter
From hair trends to relationship advice, our daily newsletter has everything you need to sound like a person who’s on TikTok, even if you aren’t.