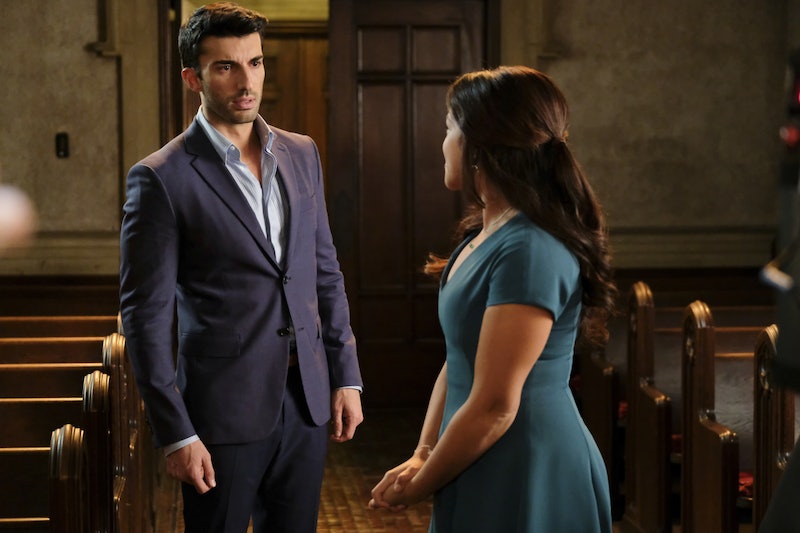 The CW's inspirational telenovela Jane the Virgin has become so much more than what its title suggests. The titular character Jane Villanueva (Gina Rodriguez) is no longer a virgin, and the show is no longer about her journey to find love. She's found it, and — no surprise here — life has only just gotten more complicated for her and everyone in her life despite that.

Deep into the third season of the critically-acclaimed series, Jane now has a child with her ex-boyfriend Rafael Solano (Justin Baldoni), gotten married to her longtime love Michael Cordero (Brett Dier), and finally lost her virginity weeks after her wedding due to her husband's recovery from a gunshot. And in the winter finale, the biggest cliffhangers actually had nothing to do with Jane, but rather the people around her. Rafael found out his late parents lied to him his whole life and he isn't even a Solano. Michael thought he was healed from his injury and ready to go back to work as a cop, but he failed his medical check-up, keeping him from his passion. Jane's father Rogelio (Jaime Camil) decided to have a baby with his celebrity matchmaker. With everything so up in the air, for the first time, Jane is actually in the eye of the storm, serving as the emotional support for all her loved ones instead of dealing with her own crisis. It's an interesting change of pace for the show, but makes it no less compelling or dramatic.

Jane the Virgin executive producer Jennie Snyder Urman reveals that one of the biggest stories being explored in the back half of season 3, premiering Monday, January 23 at 9 p.m. on The CW, is that of Rafael discovering who he is if he's not actually a Solano, leading to a new kind of existential crisis for him.

"He's always struggled with his relationship with his parents and with not repeating his parents' mistakes," Urman tells Bustle at a CBS Studios breakfast event at trendy Los Angeles brunch spot Estrella. "There's something obviously very traumatic about finding out that his whole history is not the history that he thought. But at the same time, there's something freeing about it, because he makes a really big decision in terms of changing his patterns and breaking out of this Solano family crime cycle. He makes some big character choices and he has a really interesting journey to go on to reconcile who he wants to be with who he is."

We have already begun to see that character growth in Rafael, as he came clean to the police about his father's hidden stash of stolen art, intending to break his own patterns of following in his "father's" footsteps of illegal activity. He wants to set new patterns for his own son Mateo, and that begins with being a law-abiding citizen no matter the consequences. This is a huge step for Rafael and can only signal good things for this character to come.

"There are big ramifications to that," Urman says of Rafael's confession to the police. "And eventually we'll see him try to find his real parents."

As for the other man in Jane's life, Michael was dealt a huge blow professionally as his gunshot injury continues to derail his plans to get back to work.

"Michael still isn't allowed to go back to work because he failed his medical test as a result of getting shot, so he has to really figure out what he wants to do next," Urman says. "That brings him to a real crisis point because he's never really had to think about that. There's a lot of ramifications from that for him and for Jane."

And as is the case with marriage, what's his is also hers. Michael's continued professional unmooring will have an effect on their relationship.

"Jane is a planner and this wasn't the plan," Urman says. "She loves Michael and wants him to be happy. She is going to be encouraging him to find something else that makes him happy. It takes a strange detour and he starts doing something she never really saw and in the next episode, you'll see him try his hand at doing something totally new with mixed effects. But eventually he comes out to something that feels more connected to who he is. That changes things for them a little bit."

While the most recent episodes of Jane the Virgin dealt with the issues of everyone in Jane's life, she served mostly as a reactionary character instead of having any real problems of her own. Expect that to change in the next few episodes.

"Jane has a really big new job opportunity which is going to be a long-term new move for her," Urman says. "She also will eventually finish her first novel this season. That's going to be exciting and surprising. And then she has some pretty big parenting challenges as the next couple of episodes play out."

Speaking of parenting, Rogelio's decision to become a father again with his celebrity matchmaker Darci (Justina Machado) is not going to be an easy road. Nor does it mean that it will actually happen.

"So Rogelio is certainly going to try to be a father again. He and Darci have decided to have this baby together and as long as there are no feelings involved, it could actually work," Urman says. "That's how she wants it. And without saying what happens, there are some surprising consequences to their relationship and to their decision to have a baby together that affects his career as well as his personal life."

Remember how he's trying to segway his telenovela fame into more mainstream fame? "All that journey is tied together in the next couple of episodes," Urman teases.

Something that Jane the Virgin has always done with great success is tell real, inclusive and diverse stories with a fantastical twist, and that was on full display in the Hitchcock-themed winter finale. Expect more high-concept episodes like that in the second half of the season.

"We're doing a big fantasy, magical realism episode that has to do with Jane's book being published," Urman reveals. "We'll probably do another themed episode before the end of the season but I don't know what that will be just yet."

No matter where Urman and the Jane the Virgin writers take us in stomach-clutching laughter or in heart wrenching tears, we have full confidence that we'll enjoy the ride.