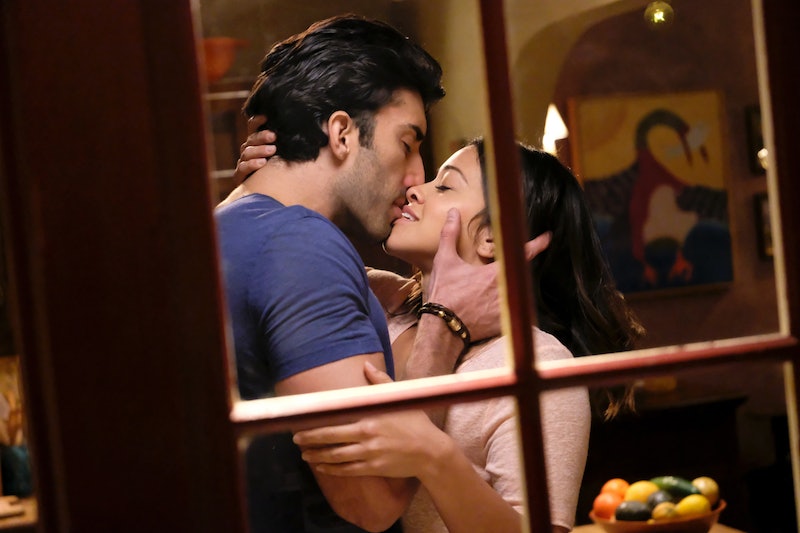 There’s no shortage of dark, grim fantasies, sci-fi, and alternate realities on TV these days. Game of Thrones kills off everyone you love, while The Handmaid’s Tale gets more frightening as its dystopia gets all too familiar and The Man in the High Castle presents a grim alternate timeline where history’s real-life bad guys win. These sorts of fantasies are often critically acclaimed for their grittiness and their unflinching looks at the darkest possibilities of mankind. But there’s at least one TV show out there that sneaks into the genre from a totally different angle. Jane The Virgin is a different kind of fantasy, and it’s the kind that’s too often critically dismissed: a fantasy of love and decency.

Make no mistake: JTV is a fantasy show — although the label of “magical realism” might be a little more accurate. It regularly breaks from reality into fantasy sequences, complete with telenovela-style interludes, inner monologues, and a melodramatic narrator to tie it all together. But the show is more than its stylistic choices — a sense of magic is woven into its very fabric. This is a series where it snows over a young couple in love as an ongoing “true love” motif (even though it’s almost never real snow) and where a poster of President Obama winks at a Mexican woman getting her citizenship. This isn’t the magic of dragons and sorcerers or some dystopian horror-fantasy: it’s magic of real life, lived kindly.

That last part is what makes JTV different, and what makes it valuable. Where other series use fantastical elements to imagine the worst possibilities of mankind, JTV is a fantasy world where people are inherently decent and the darkest moments are not the things that define us. Unfortunately, these kinds of fantasies of happiness and kindness tend to get dismissed or pigeonholed, often with gendered labels like “chick flick” in favor of male-centric stories about stereotypically masculine men and their stereotypically masculine pursuits. Fantasy has become code for “Chosen One (almost always a man) clenches jaw, suffers, is motivated by the suffering of a mentor and/or a woman, then either wins and gets a girl and a kingdom or loses in a heroic death.” The psychology of these stories is so often an oversimplification of stereotypical masculine preoccupations: conquest, dominance, and bottling up emotions.

But rom-coms — and JTV is, fundamentally, a rom-com, with a splash of the coming-of-age narrative — are a fantasy of a different kind. The show imagines a world where victory comes through expressing emotions, not hiding them; through compassion, not violence; through cooperation, not conquest. It’s a little bit sweeter (and simultaneously more melodramatic, but in a very self-aware, meta-humorous way) than reality, but like other fantasies, it has enough in common with our world to make it clear that this is just a tweaked imagining of how the world could be. But it’s filtered through the experience of people whose lives aren’t the default depictions (that is, neither white nor male) who are often thrown in as obstacles and motivations for a default protagonist in more traditional projects. Instead of imagining a world with even more cruelty, JTV flips the script and imagines a world that is kinder and more magical.

This isn’t the magic of dragons and sorcerers or some dystopian horror-fantasy: it’s magic of real life, lived kindly.

The Netflix rom-com Set It Up has this sweet through-line: “and yet.” It’s the idea that the world can, indeed, suck big time. People are flawed, things go wrong… and yet. We love anyway. We go on in spite of — or because of — those flaws, because that’s what makes it real. Fantasy is so often bereft of this “and yet” hopefulness.

Jane the Virgin takes the idea of fantasy — a world not quite like our own, heightened by imagination — and transposes it onto the story of women’s lives, told with a female showrunner at the helm. It’s a world of difference. From this perspective, fantasy is no longer a site of grey-tinged, bloodstained musings on the suckiness of the world; instead, it becomes the site of brightly colored daydreams, an emotional honesty and an uncynical belief in true love. Jane the Virgin is a fantasy of a world that is kinder — not just to women, but to everyone. Terrible things happen to these characters: loved ones die (or, sometimes, don’t), families fight, romances don’t work out, hearts shatter before our eyes, careers are destroyed. This is a telenovela, after all, and the specter of death is always looming. Even one of the show’s romantic leads isn’t safe, and at least half a season is focused on the grieving process of Jane as a young, unexpected widow.

“And yet” could almost be Jane the Virgin's theme. It’s not a “chick flick” TV show in the sense of the Lifetime-original-movie melodrama, nor a conflict-averse Hallmark card come to life. It deals with real, tough life: abortion, immigration, grieving, sexuality, and religion are all woven into the narrative. And yet, it’s not preachy. And yet, it’s not dark and angry at the world. Bad things happen, and yet life goes on and the magic remains.

It would be easy to say that joyful, often feminine “fantasies” are simply not as well-crafted as dark ones; this operates under the assumption that making dark, harsh art that digs into the grittier side of humanity is somehow more difficult than creating happy endings and moments of joy. I disagree. It’s easy to take a cynical view of the world, but it’s much harder to find joy and kindness that doesn’t feel unearned or fake. Cheesy happy endings are easy, sure, but so are cruel, grim, unhappy ones. But finding joy and crafting a story that earns happiness in an imperfect world? That’s real magic.