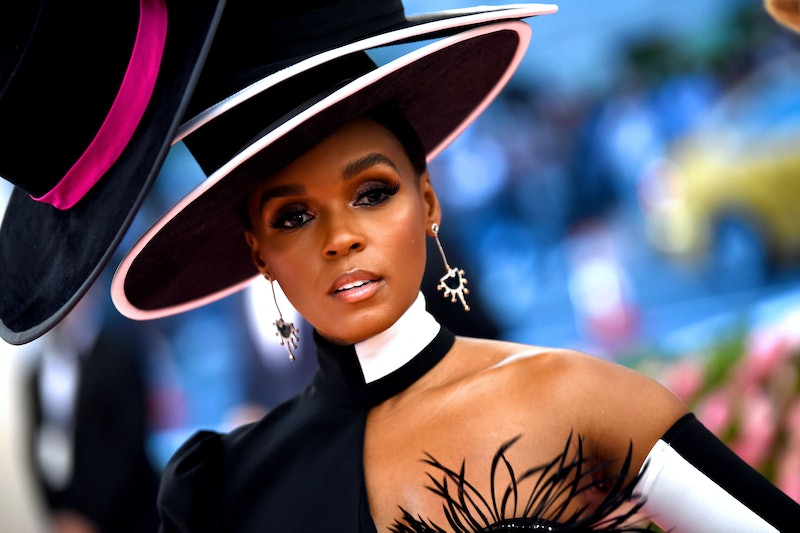 Janelle Monáe certainly knows how to stay busy. On the same day that the new trailer for the movie about Harriet Tubman, which stars the Dirty Computer singer, came out, it was announced that Janelle Monáe will star in Season 2 of Homecoming. No, not Beyoncé's Homecoming, but the Amazon series directed by Mr. Robot creator Sam Esmail. The first season of Homecoming was based on a popular podcast of the same name and starred Julia Roberts, Stephan James, Bobby Cannavale, Shea Whigham, Alex Karpovsky, and Sissy Spacek. Monáe will replace Roberts as the star, though TVLine reported that the latter will stay involved as an executive producer.

On Tuesday, July 23, Monáe responded to the Homecoming casting reports on Twitter, saying, "Excited and ready for this wild ride." She included prayer-hands and the rock-and-roll hand emojis, too.

As mentioned previously, Tuesday also brought the first look at Monáe's role as Marie in the Harriet Tubman film, Harriet, which is due out on Nov. 1. Based on Monáe's tweet, it seems like she feels prepared to conquer it all, including stepping into Roberts' shoes, which is likely no easy feat.

According to TVLine the second season of Amazon's hit series will depart from the first season's podcast origins, and based on the description of Monáe's character, it sounds like the series will only get eerier. "Monáe plays a tenacious woman who finds herself floating in a canoe, with no memory of how she got there — or even who she is," TVLine reported.

So far there's no word on which of Season 1's characters, if any, will return for Season 2, but you'll probably want to look out for that in the coming weeks, as production is set to begin later in the summer. Deadline's Nellie Andreeva reported that she had heard rumors that Colin Belfast (Cannavale) and Walter Cruz (Stephan James) would likely return for Homecoming's Season 2, as well as Audrey Temple (Chau) and possibly Thomas Carrasco (Whigham). The new season is slated to arrive on Amazon in 2020.

It's likely difficult for fans of Homecoming's Season 1 to imagine the show without Heidi Bergman (Roberts), but it sounds like the story will follow a similar story about Monáe's character, as she pieces together the memories from her forgotten past. In Season 1, Heidi eventually regained the memory of her past experience with working as a caseworker for the Homecoming Transitional Support Center.

Spoiler ahead for Season 1. Once she discovered that the experimental recovery center for veterans had conspired to wipe its patients memories, including Heidi's patient Walter Cruz's, using an unregulated new drug. She eventually ingested enough of the mysterious substance to wipe out her own memory. All of which her future self had to piece together throughout the Season.

In a post-credits scene following the Season 1 finale, it was revealed that the substance was still being used by the mysterious corporation that developed the drug, and engineered the testing on veteran patients. And, given that Monáe's character description states that she won't have any memory of her past, it seems likely that her memory loss will be tied to the drug, thus continuing the mystery from Season 1.

Monáe's character will likely find even more devious schemes than her predecessor, and fans can't wait.

More like this
Theo James Would “Love” To Star In George Michael Biopic
By Sam Ramsden
At 28, Rosie Perez Risked Her Career To Stop Playing Stereotypes
By Gabrielle Bondi
Here’s Everything Coming To & Leaving Netflix In February
By Jake Viswanath
Adam Ali Hopes 'Waterloo Road' Will “Subvert” Queer Misconceptions
By Sam Ramsden
Get Even More From Bustle — Sign Up For The Newsletter
From hair trends to relationship advice, our daily newsletter has everything you need to sound like a person who’s on TikTok, even if you aren’t.