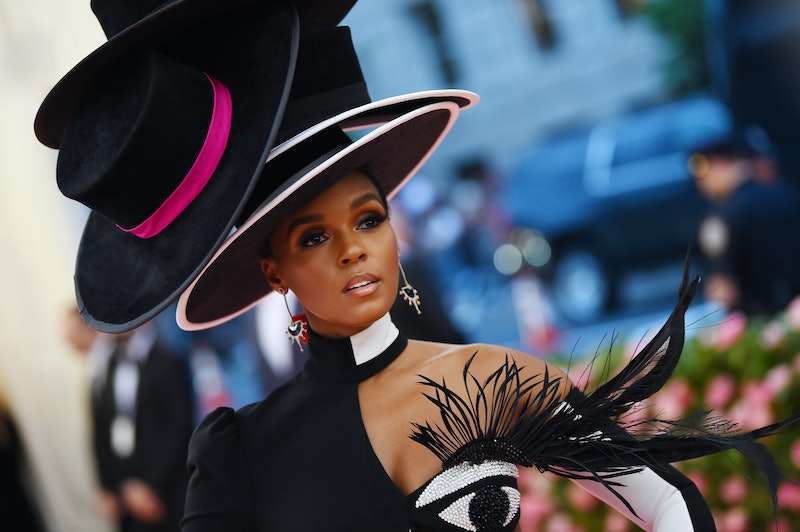 When it comes to quirky celebrity style, no one takes on a red carpet quite like Janelle Monae. The stylish singer is known for breaking style rules and crushing fashion expectations on the regular — and her look for this year's Met Gala was no exception. Janelle Monae's 2019 Met Gala outfit included four hats, a giant face with a blinking eye, and a whole lot of personality. As if you'd expect anything less from your favorite celebrity with stunning style.

No celebrity celebrates the gaudy and avant-garde on the regular quite like singer Janelle Monae. Known for her incredibly unpredictable style on stage and on the red carpet, Monae certainly brought the fire to the 2019 Met Gala's Camp festivities. Wearing stellar designer Christian Siriano, Monae stepped on to the red carpet in a gown that looked like an abstract face. With one eye covering her breast with grand eyelashes and lips splattered on her skirt, Monae's pink, white, and black outfit was a voluminous showstopper.

Did I mention the eye on her dress actually blinked? Because it most certainly did — even with those gigantic eyelashes that rival Snuffaluffagus.

What made Monae's look complete and Campy, however, was the top hat affixed to the star's head. Well, rather, four top hats stacked precariously on top of one another in a leaning tower. Now that's Camp as hell — and probably extremely heavy to carry around. It's like your favorite childhood book Caps For Sale come to life on a fashion-forward red carpet.

Monae also wore a single black-and-white glove to complete the sartorial portion of her look. For makeup, the singer went minimal because with that much style, you don't need a grand makeup look. Natural — with some bold eyeshadow for good measure — is just fine. Simple — yet grand — jewels finished off Monae's Camp look, adding to the feminine grace of the ensemble. A chain ring and dangling earrings balanced out the edgy look quite well.

Notably, Monae's Met Gala look played with feminine and masculine style in an interesting way. But the singer is certainly no stranger to toying with gendered fashion expectations even outside a Camp themed event. Known for her affinity for tuxes as much as her iconic vulva pants, Monae often plays with gender through fashion, especially on stage or on the red carpet. By mixing a femme gown with a masculine top hat (or four), Monae pulled together the polar opposites of gendered fashion into one cohesive look. And the result is Camp AF.

Celebrating the unconventional, kitchy, and all-around avant garde is exactly what Monae is known for when it comes to fashion. The Met Gala's Camp event was the perfect excuse for Monae to show off the style she loves — and she did just that flawlessly.

Now let's all go affix giant beaded eyes with feathered eyelashes to our shirts. Bonus points if you can figure out how to make them blink on command.