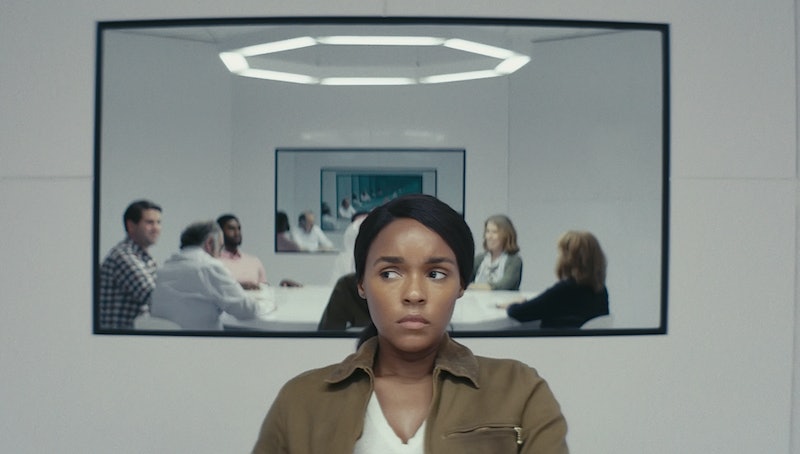 Spoilers through Season 2, Episode 4 of Homecoming ahead. Janelle Monáe's Homecoming character Alex Eastern wears many hats. In Season 2 of Amazon Prime's series — which premieres Friday, May 22 — she's introduced as Jacqueline Calico, via an ID found on her person after she wakes up, memory wiped, in a boat. This turns out to be an alias, however, given that she's a crisis manager who dons personas in order to mine information.

Previously, we saw Alex (we learn her name is, in fact, Alex Eastern) in action in Episode 3, when the crisis manager successfully convinced a female employee who'd been sexually harassed to quit her job instead of pressing charges. Alex is no saint, in other words.

In fact, she's a chameleon. "I perform," she tells her partner, Audrey Temple (Hong Chau), in Episode 4. "[Walter Cruz] just needs someone to talk to, and I'll be that person." They've just learned that the veteran requested his medical records from the VA Office, and Alex decides to make an attempt to keep him quiet.

Episode 3, however, takes us back to before Alex lost her memory (likely due to the same drug that Heidi and Walter ingested in Season 1 and which Audrey is so fond of applying to her wrists). After convincing the sexual harassment victim to leave the company, the crisis manager returns home, where she convinces Audrey to oust her boss, Colin (Bobby Cannavale). We saw this play out in Season 1, but now we know it was Alex who was the real mastermind.

But Monáe's character doesn't remember any of this at the beginning of Season 2. She believes she's an Army vet, due to the disguise she donned to get in Walter's good graces in an attempt to keep him quiet. Even in her state of amnesia, however, Alex is resourceful. She retraces her steps after finding a napkin with the name of a bar on it in her pocket, returns to said bar, and finds her receipt from the previous evening, when she was apparently there. This, in turn, takes Alex to Audrey, whom she realizes is her partner, and consequently to the Geist headquarters.

But even though she doesn't yet remember everything that she helped set into motion, it's precisely because of Alex's job that she's able to conceive of these grand plans for Audrey. "Every day I go into work, I deal with the sh*ttiest of people — the lowest of low behavior — and I swim in it," she tells her partner in a flashback. "If something were to happen, I know how to protect us."

And as Audrey begins to fret over her newfound role at Geist (and for good reason, given the absolute sh*tshow that was the Homecoming Initiative), Alex steps in to clean up the mess her girlfriend inherited. So when Audrey learns that Walter has been looking into his medical history, Alex tells her girlfriend, matter-of-factly, "I'll take care of it."

More like this
Everything To Know About The 'Daisy Jones & The Six' TV Series
By Maxine Harrison and Brad Witter
Every 'That '70s Show' Character Who Returned For The Netflix Spinoff
By Grace Wehniainen
Here’s What Happens To Bill & Frank In 'The Last Of Us' Video Game
By Brad Witter
Everything To Know About A Potential 'Lockwood & Co.' Season 2
By Gretchen Smail
Get Even More From Bustle — Sign Up For The Newsletter
From hair trends to relationship advice, our daily newsletter has everything you need to sound like a person who’s on TikTok, even if you aren’t.