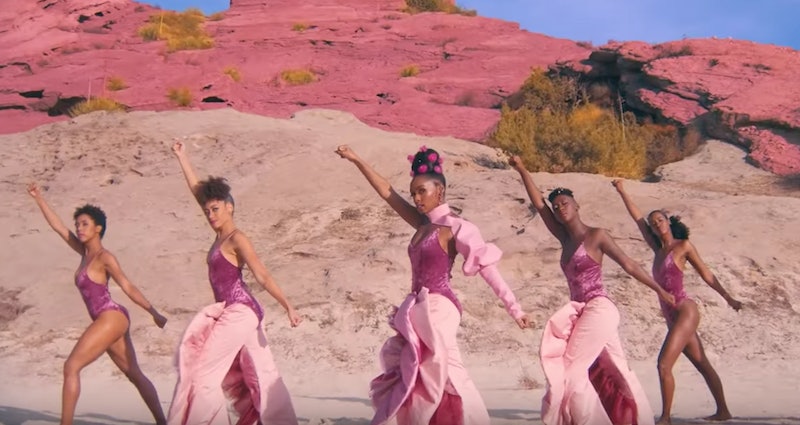 It's no secret that Janelle Monáe exudes empowerment in everything she does. From her movies to her music videos, you can usually bet that Monáe's work will involve some moment that makes you feel girl power vibes. For Janelle Monáe's new song, "PYNK," she released a sex-positive video that celebrates everyone's pink parts, and it's vagtastic. The song also features Grimes. And as with Monáe's music video for "Make Me Feel," Tessa Thompson appears in the "PYNK" video. Both "Make Me Feel" and "PYNK," as well as Monáe's third recent single "Django Jane" come from actor/singer's upcoming album Dirty Computer which drops on April 27.

“PYNK is a brash celebration of creation. self love. sexuality. and pussy power! PYNK is the color that unites us all, for pink is the color found in the deepest and darkest nooks and crannies of humans everywhere... PYNK is where the future is born....”

The video itself also supports the message championing self-love. Somewhat similarly to the "Django Jane" video, Monáe is surrounded by women throughout "PYNK's" video. "PYNK" is likely unlike anything you've ever seen before, though, and that's due to the ruffled pink pants that Monáe and the other women wear while dancing in the desert. The fact that these pants resemble the two shades that make up the labia majora and labia minora is likely no coincidence considering Monáe's "Django Jane" calls for "pussy power."

In addition to Monáe's ruffled pants, the "PYNK" video also includes images of a line of people — with varying skin tones — jiggling their butts while Monáe and Thompson's head pop up on either side of them. It's silly, but just another example of how the video celebrates women's bodies, it definitely doesn't seem like a moment that intends to over-sexualize women's bodies, but rather to appreciate them. Another example of that comes when Monáe sings in a bedroom and stands up to reveal that she's wearing underpants that say "Sex Cells" while pubic hairs protrude outside of what society deems the "bikini line."

Another scene shows the camera panning to a few of the dancers' underwear which also include embroidered phrases like "Great cosmic mother" and "I grab back." It's pretty refreshing to see the vagina and women's bodies in general get this much celebration. In music and film, men frequently either joke or brag about their penises, and it's high time for women to do the same with their bodies.

While the video and lyrics to "PYNK" make it clear that Monáe's celebration pertains to the female form, it also makes a strong case for how the color pink — and the concept of "PYNK" — is for everyone. Toward the end of the song the background vocals sing, "We're all just pink" and "Deep inside, we're all just pink." While that may be true, the song makes sure to focus on females and femmes alike who want to celebrate the color most commonly associated with women. "'Cause boy it's cool if you got blue / We got the pink," Monáe sings.

Immediately after the video and single dropped on Tuesday, people on Twitter were quick to take note that the concept of a woman singing about loving her vagina makes the song a contender for the Hall of Fame.

This isn't the first time that Monáe's recent songs were commended for their celebration of queer sexualities. As soon as "Make Me Feel," came out, people quickly labeled it a "bisexual anthem," and "PYNK" definitely lives up to the first two videos that the singer released from Dirty Computer.