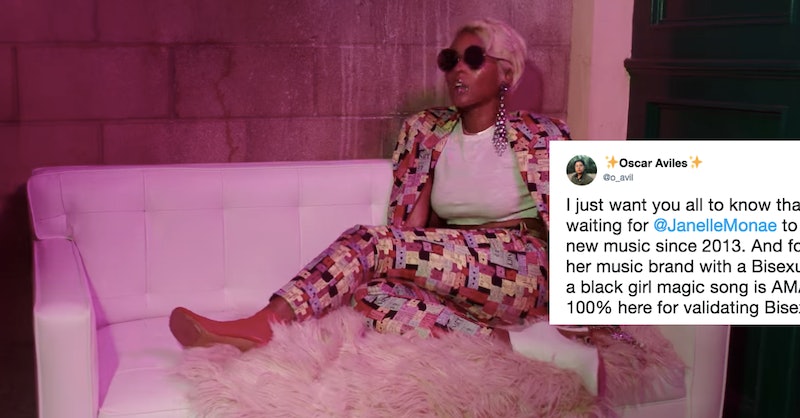 It's been quite some time since Janelle Monae gifted music to the world, but the self-proclaimed android's newest track "Make Me Feel" makes the wait worth it. It's funky and totally Prince-inspired, and Monae's new music video with Tessa Thompson is sparking plenty of appreciation on Twitter. More specifically, fans are applauding the video's bisexual representation.

For her latest release, the fashionista ditched her usual black-and-white frock for colorful suits, sheer, and leotards. If you thought her 2015 single "Yoga" pushed the envelope, the Dirty Computer singer sealed it, stamped it, and mailed it off in this visual. Not to say that Monae wasn't projecting sexiness in her perfectly tailored suits before or anything. But the star definitely showed fans a different layer to herself while donning colorful leotards and stunning sheer, floral-printed trousers.

With Annihilation star Thompson as her love interest in the video, the singer-turned-actor is also fueling those pesky little dating rumors. There's no denying that the two ladies have awesome chemistry. After all, did you see the way Monae and Thompson got down on the dance floor toward the end? But regardless of their real-life relationship status (none of which has ever been confirmed), the "Make Me Feel" video is showing that love in all forms is valid.

The internet is officially calling Monae's "Make Me Feel" video "Prince meets 'San Junipero'" — and for good reason. Not only does the track incorporate a lot of the Purple One's signature sounds, Monae's love affairs with her video musings, both male and female, scream "bisexual realness." And of course, fans can't get enough of watching it.

The reactions range from appreciating Monae's supposed outcry for visibility, to celebrating the singer's unapologetic take on what black bisexuality looks like. Either way, everyone can pretty much agree that the track is going to be a hit.

In addition to "Make Me Feel," Monae also released a track and visual combo for her other single released Feb. 22, entitled "Django Jane," and it's everything a black feminist could ever dream of. Fierce, beautiful, and proud, Monae raps about being the driven queen that she is — inspiring fans, more specifically other black women, to do the same.

Paired with "Make Me Feel," the release of "Django Jane" placed the bow on top of an already perfectly package, and fans are obsessing over Monae's vision.

It goes without saying how important representation in media is, and thanks to Monae's "Make Me Feel" video, the LGBTQ community, particularly black gays and lesbians, has another beautiful depiction they can see themselves in on screen. The entertainment industry hasn't had the best track record when it comes to projecting the truths of anyone who isn't white, male, cis-gendered, or heterosexual, which makes the need for other brave and unapologetic artists like Monae even greater.

If the recent Black Panther release taught the industry anything, it's that when fans feel included and represented in the story, they'll give their support in droves. And though Monae's artistic expression comes in the form of a music visual, and not a box-office giant, maybe industry heads will still take note of the enormous social media praise it's receiving, and will be inspired to push for even more inclusive stories within.

With "Make Me Feel" and "Django Jane," fans are pretty stoked to see what Monae's new album in almost five years, Dirty Computer, has to offer. The only downside to this, however, is that the album isn't set to hit stores until April 27. But if the highly anticipated album is anything like her latest singles, fans will have a lot to look forward to.

More like this
Tristan Thompson Plays Drake’s Best Man In A Music Video Wedding With 23 Brides
By Grace Wehniainen
Adele’s All-Female Lineup Includes Kacey Musgraves, Mahalia, & Self Esteem
By Shahed Ezaydi
Olivia Rodrigo’s Song Dedication To 5 SCOTUS Justices Sent A Strong Message
By Grace Wehniainen
Will Beyoncé Be At The BET Awards To Perform “Break My Soul” Or Attend The Show?
By Jake Viswanath
Get Even More From Bustle — Sign Up For The Newsletter