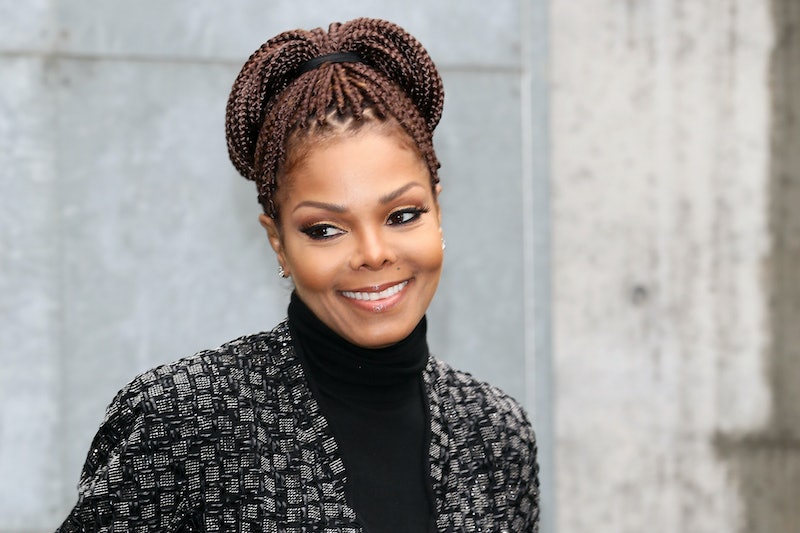 It's certainly been an eventful year for Janet Jackson. Earlier in 2017, Jackson gave birth to her son Eissa, and then just a few months later, there was the surprising news that Jackson and her husband Wissam Al Mana reportedly split up. Seemingly unfazed by all of the rumors about her marriage, Jackson shared the first photo of her son with her social media followers on Friday night, and both she and Eissa look adorably happy and healthy in the selfie.

Jackson and Al Mana were married in a private ceremony in 2012, and as they revealed to Entertainment Tonight about a year later, it wasn’t an extravagant event, but more of a small, "quiet" wedding. The couple remained relatively off the radar until Jackson confirmed she was pregnant with her first child in October 2016. The singer had a rather private pregnancy, and besides her rep's confirmation that she had given birth, she hasn't shared much about her son with the public.

Given how private Jackson and Al Mana are about their relationship and family, it was pretty shocking when Page Six reported that the couple was divorcing. Bustle reached out to Jackson's rep for comment at the time, but did not receive an immediate response.

Whether or not those reports are true, Jackson and her son appear to be doing well in the new photo. She wrote in the caption, "My baby and me after nap time."

That yawn! Seriously, what a cute little guy, and Jackson is looking great as ever. I'm happy to see that despite all of the reports, she and her son appear to be doing just fine.

Plus, it seems like there's no bad blood between Jackson and Al Mana. The Qatari businessman recently shared a note to his website — along with a picture of Jackson — that read,

"To the most beautiful person in the world, thank you for your divine love, your eternal support and for being my best friend. I love you so much, inshallah we will be together in the Great Forever."

If the split rumors are true, it's great that the couple isn't speaking ill of each other in public, and instead, they're focusing on their child. In the photo she posted, Jackson and Eissa look well-rested and content — and that's really all that matters.

More like this
Khloé Kardashian Is Reportedly Dating A Private Equity Investor She Met Through Kim
By Jordyn Tilchen and Jake Viswanath
Hailey Bieber Reacts To Rumors She "Stole" Justin & *That* Selena Gomez Chant
By Radhika Menon
Dixie D’Amelio & Noah Beck “Love Each Other” Despite Breakup Rumors
By Julia Emmanuele, Jordyn Tilchen and Grace Wehniainen
Adam Devine Hilariously Let Everyone Know He’s *Not* Accused Cheater Adam Levine
By Brad Witter
Get Even More From Bustle — Sign Up For The Newsletter