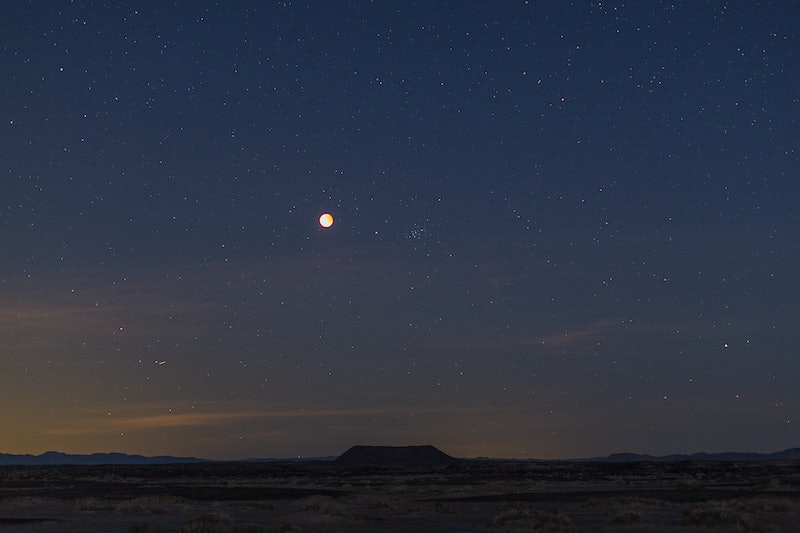 If you were worried that 2019 would include as many retrogrades as 2018 did, fret not: The first month of 2019 won't include any new retrogrades to wreak havoc in the lives of all zodiac signs. Hurrah! Though 2019 will open with Uranus still in retrograde, where it's been since summer 2018, the planet will turn direct on Jan. 6, 2019 — and, after that, January 2019 retrograde-free. Hear that? That's the sweet silence of astrological crickets.

Retrogrades are known for bringing up issues and events that have to do with the past. With the lack of retrogrades occurring in the new year it's almost as if we have an opportunity to focus on the ~present~ and move into 2019 free from planetary fog. It could mean that the year ahead is full of this forward moving all-is-right-with-the-world energy.

Though Mercury is generally the planet we talk about when we talk about retrogrades (likely because its retrogrades are fast and chaotic) In Aug. 2018 Uranus went retrograde. Instead of lasting a few weeks, as we're accustomed to with Mercury's retrograde, Uranus has remained retrograde for months. What does it all mean? According to Tarot.com, "Uranus Retrograde wants us to get real. It's time to face our fears and change the things that aren't working so we can become who we really want to be."

That's a lot of energetic work to put into our personal efforts, but as the retrograde concludes it might have proved necessary. And, it might just pay off in the new year.

As of Jan. 6, 2019 Uranus will station direct. This news might come as a relief as Uranus asked us to pull through the tough stuff, which felt more like trudging than frolicking. We were asked to confront the uncomfortable in the timespan of four months, which might have led to little shocks of sporadic anxiety. But perhaps you've noticed a gained strength as Uranus nears the end of its retrograde. Maybe you've rid your life of the relationships, the jobs, the patterns that don't hype you up.

Change is never easy, but sometimes, and with the push of planets, necessary. But we survived the retrogrades. And now with Uranus finally stationing direct, the retrograde calendar remains mum until March when Mercury breaks the silence with its typical technology interruptions and pesky delays. Even though Mercury is set to go retrograde three times in 2019. If you'd like to mark your calendar, Cafe Astrology's 2019 planetary forecast cautions Mar. 5 to Mar. 28, Jul. 7 to Jul. 31, and Oct. 31 to Nov. 20 as Mercury's retrograde periods.

If you felt an extra sting during the Uranus retrograde period, it might have been because another planet overlapped its retrograde. In 2018 Venus was retrograde from Oct. 5 to Nov. 16. With the back to back and overlapping retrogrades of 2018, it might have felt like catching a breath was asking too much. But, we can loosen the tense shoulders. 2019 will have two planets that went retrograde in 2018 not turn retrograde at all.

That's right, a break! According to Starry Blessings Astrology, Venus and Mars will not turn retrograde in 2019. Like, at all. As in, don't worry about it. Though there will be retrograde activity in 2019, it ~might~ not feel as overbearing as it did in 2018.