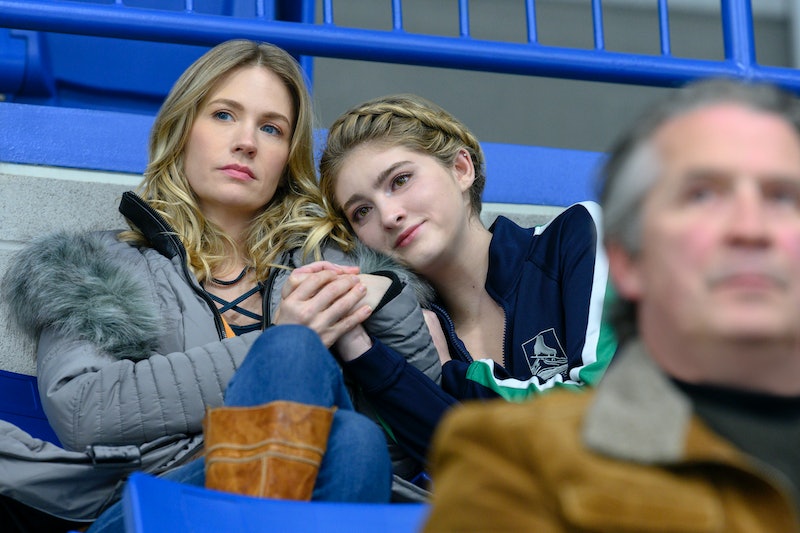 Spoilers ahead for Season 1 of Spinning Out. Carol Baker is no ordinary mom. The Spinning Out character played by January Jones was felt forced to surrender her Olympic dreams when she got pregnant at a young age; Twenty-one years later, she lives and breathes for the skating careers of two daughters, Kat and Serena. At first, her obsession with their performance, diets, and schedules seems borderline abusive. But it quickly grows apparent that her fixation is greater than that — it's clinical.

The series opens with Carol rolling off of the living room couch to greet her daughters in the kitchen. They're prepping for a day on the rink, and Serena stares at a bowl of fruit and hard boiled egg. "Serena, why aren't you eating?" Carol asks, matter-of-factly. "What did Mitch say about getting enough protein? Eat it." She shoves the egg in Serena's mouth. That lecture sets the season's tone for what to expect from Carol Baker.

On the rink, Kat's best friend Jenn refers to her mom as a "cold-hearted minx." The next morning, Carol busts through Serena's door at 4 a.m. and forces her to do clapping pushups in the snow. Serena calls Kat to come to her rescue, who finds them on the back porch. She's the first to bring up Carol's mental illness.

"You stopped taking your meds," Kat says. Carol's eyes narrow. "If I hadn't gotten pregnant with you, I would've gone to the Olympics!" she barks. Kat has heard this before — she knows that her mom is bipolar, and is experiencing a manic episode induced by a lack of medication.

"You're not healthy right now!" she tells her mom. "I'm gonna get your lithium. You're gonna take it while I watch."

Lithium is a mood stabilizer that is reportedly the mainstay pharmaceutical treatment for bipolar disorder. According to PubMed, it helps with mood episodes, switch prevention, prophylactic treatment, and suicide prevention.

Kat later has other arguments with Carol and Serena, which is when it's revealed that she is also bipolar — she inherited the disorder from her mom, but she's determined to manage it. According to the U.S. National Library of Medicine, the condition is often inherited by first-degree relatives, including siblings or children of affected individuals. For unknown reasons, it's more commonly inherited in some families than others.

When their fight leads Kat to move out, Carol pleads for her return and promises she'll stabilize her meds. Kat's not convinced, and she stays away. Later, Carol ditches the lithium and anxiety medication in her car's glove compartment and pops a stimulant instead.

Serena is surprised by the peace at home upon Kat's departure, and she's especially shocked when, one morning, Carol slides her a plate of smiley chocolate chip pancakes for breakfast — a far cry from the egg and fruit she's used to. Serena just goes with it. And just when she's convinced that her mom is feeling better, she finds her on the couch, scratching Kat's face from all of their family photos. "What're you looking at?" Serena asks her. "Nothin' baby," she says, calmly.

What follows is a dramatic and tense family drama as Carol, and also Kat, struggle to manage their mental health, their dreams, and intimate relationships. In that way, Netflix's Spinning Out is almost more about family than figure skating — in the best way possible, of course.