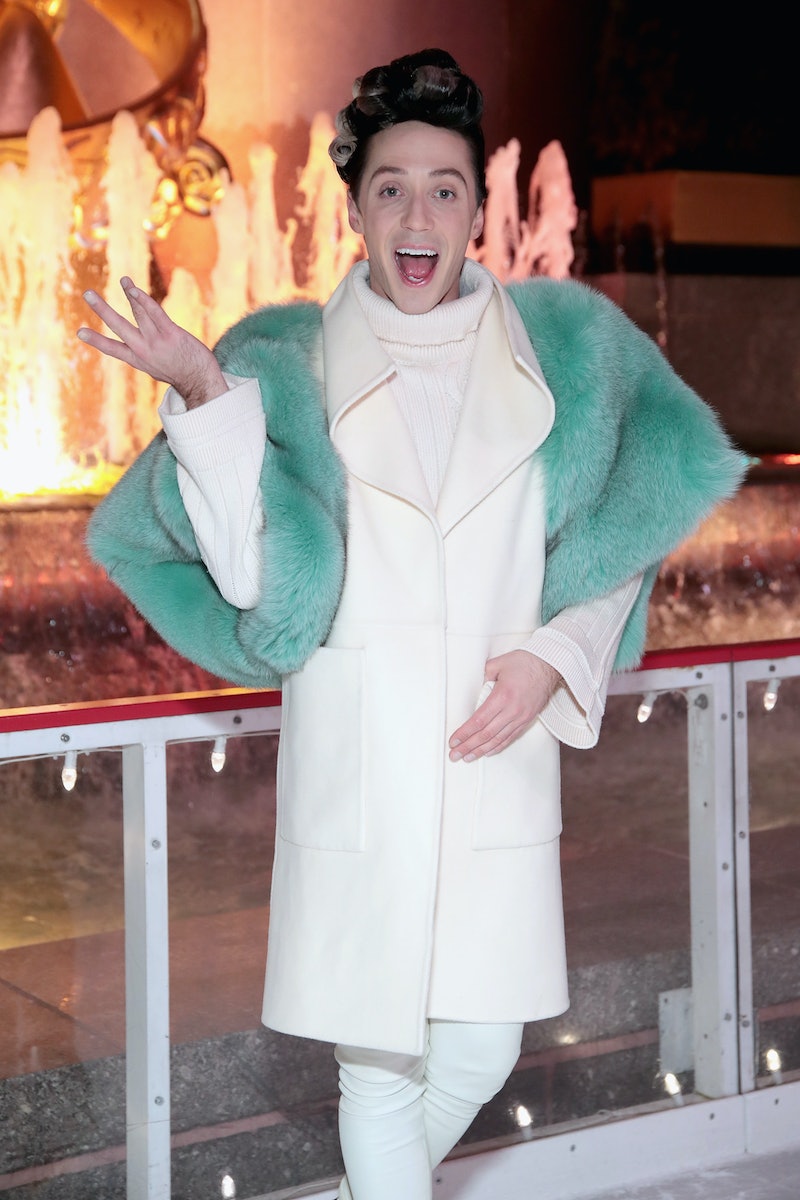 Netflix is officially going for the gold — and they'll now have a little help from a former Olympian on their quest. Johnny Weir will join the cast of Netflix's skating drama, Spinning Out, as a cutthroat competitor who will stop at nothing to win as he competes in the world of figure skating. And hopefully, he'll be able to bring some of his own signature fashionable flair to the small screen as well.

According to Entertainment Weekly, the skating drama will star Skins' alumnus Kaya Scodelario as Kat Baker, an up-and-coming single skater, who after an injury threatens to derail her career, decides to partner with a "talented bad boy" named Justin (Evan Roderick), in order to get another shot at skating glory. However, their newfound and contentious partnership "risks exposing a fiercely kept secret that could unravel her entire life," as explained by the show's official logline (via Deadline). "On and off the ice, Kat and her new partner will face daunting odds, injury to body and soul, financial sacrifice, and even potential mental breakdown on their way to realizing their Olympic dream."

Weir will play Gabe, an ice skater who appears to be kind and easy going, but who will actually go to extremes in order to beat Kat and Justin and taste that Olympic gold for himself.

In addition to dipping his toe into the world of acting, Weir is currently best known for his hosting gigs alongside his best friend (and Olympic gold medalist) Tara Lipinski. The pair have provided color commentary — and exciting, avant garde ensembles — for everything from the Kentucky Derby to the 2018 Winter Olympics.

Since making his Olympic debut back in 2006 at the Torino, Italy, Winter Games, Weir has earned a dedicated fan following thanks to his outlandish outfits, his unabashed originality and his lifelong commitment to being himself at all times. And though his over-the-top personality and performances have earned him some detractors, Weir has stayed true to his vision of adding color and sparkle to the ice skating world.

"As Lady Gaga would say, ‘I have all my role models out there,'" Weir told reporters after his sixth-place finish at the 2010 Olympics. "I may not be the most decorated person in the skating world, but judging by the audience reaction… they go on my journeys with me."

While Weir might be the only Olympian cast in Spinning Out thus far, he's far from the only cast member who been working to inspire fans and audiences with their work. Scodelario, who will play the show's lead character, has been incredibly outspoken about her desire to inspire both young girls and boys by bringing strong female characters to the screen.

“I always used to get asked ‘Do you play strong female roles to inspire young girls?’ And I thought about it, and I was like, yeah, but also to inspire young boys," Scodelario told Bustle in February. "I think it’s also important that they grow up seeing female leads and female driven films and see women standing up to abusers and speaking out and being brave."

She explained that her one-year-old son has influenced her desire to change the way women are represented onscreen, in order to set an example for him, and hopefully, change the world he is raised in.

"I want him to grow up knowing that the image of a woman doesn’t have to be perfect or submissive or quiet or well-behaved and all these horrible things that I grew up thinking," Scodelario said. "I want him to know that I’ve had experiences, and some of them haven’t been great, but he’s inspired me to want to change that."