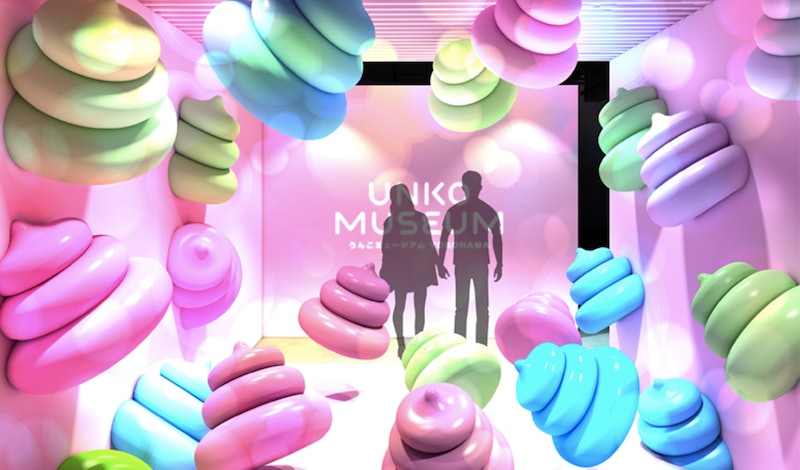 They said it couldn’t be done. They said it shouldn’t be done. But they didn’t know just how much the world needed Japan’s new poop museum. In the Instagrammable-fashion of The Museum of Ice Cream you’ve seen all over your feeds, the Unko Museum is decorated with pastel colored poo dollops and various twee exhibits that make our body’s nastiest function look downright cute. (“Unko” is Japanese for “poop,” and a museum dedicated to adorable unko is exactly what we need right now.)

As Jezebel succinctly describes, the museum looks like a “Lisa Frank fever dream” but with poop. There are poo statutes in pastel pink, blue, yellow, and green shaped a la the poo emoji. There are poos with faces that look surprised and delighted. There are swirly poo silhouettes in the decor. Imagine the most Instagram-worthy space. Now imagine that space but everything is poop. That is the Unko Museum.

“There is no dirty brown poop in Unko Museum,” a representative for the Unko Museum tells CNN, “It’s all colorful, cute and pop design poop.” While I do feel personally attacked by the phrase “dirty brown poop,” I think I wouldn’t mind living in a world where all poo followed my Instagram theme.

Located in Yokohama (Japan’s second largest city by population and just a bullet train away from Tokyo), the Unko Museum opened its doors March 15 of this year. According to Time Out Tokyo, the Unko Museum will be only be open until July 15. So, you’ve got four months to get your sh*t together and fly to Japan and see the poo museum in person.

“The museum focuses exclusively on cute, pastel-coloured unko,” Time Out Tokyo explains, “complete with its own mascot character ‘Unberuto’ – a walking poop pile that carries around its own toilet.” A poop mascot! That carries! Its own toilet!!!

So, what do you do at a poop museum? Pretty much everything so long as it doesn’t involve actual “dirty brown” poop. The museum is divided into three different “zones.” Each zone is named after cutesy wordplay on the word “unko”: ‘un’teractive, ‘un’sta-genic, and ‘un’telligence.

You can take a picture from giant toilets and post it to Instagram. You can play in a ball pit with a giant poop sculpture in the middle. You can watch people play in the ball pit while you sit on an unko-shaped seat. You can draw a cute little diagram of your own poop to proudly display for all to say. You can even yell the word “unko” into a microphone.

As part of the ‘un’teractive art display, there is something called the “kuso game.” (“Kuso” is Japanese for “shit,” per Time Out. We’re all learning a lot today.) The game involved stepping on poo-shaped light-projections. When you step on the light poo, they splatter. They turned arguable one of the worst sensations in the world (stepping in shit) into a fun game!

Of course, you’ll want to take some poo with you when you go. So, there are souvenirs from around the world all poo-themed and poo-shaped. Admission is relatively affordable as well (provided you can make your way to Japan). Tickets cost ¥1,760 (about $16 U.S.) for adults and ¥990 (about $9 U.S.) for children.

“Once it’s born, it will be flushed away and gone forever,” a loose translation of the Unko Museum website reads. “Poo’s life is always short…”, the website continues, but now you can experience unko in a cute and long lasting fashion. What more could you ask for from your poo?