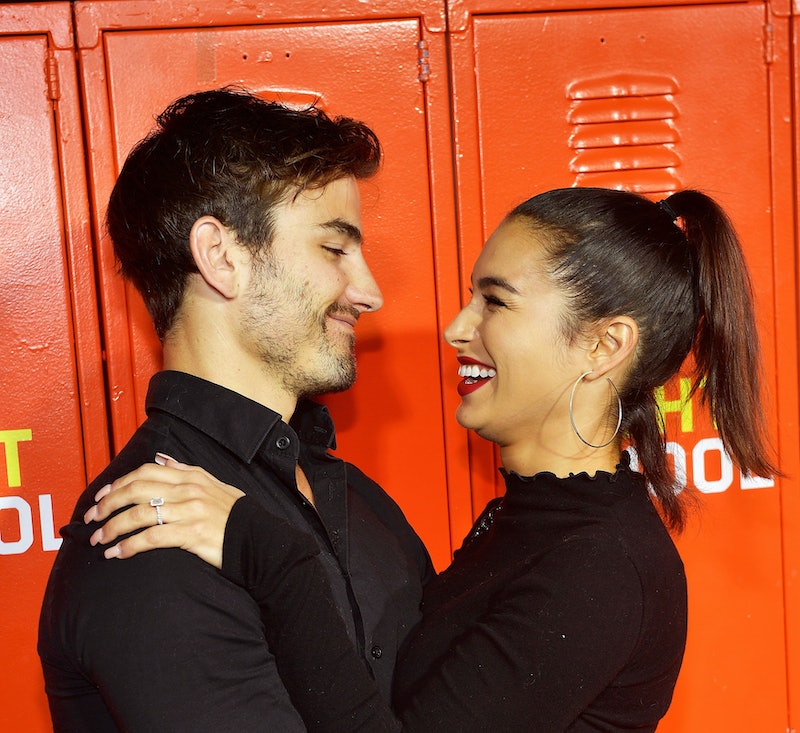 There are plenty of Bachelor in Paradise fans hoping for a romance like Ashley Iaconetti and Jared Haibon's. That's something these two can likely relate to, since they're all about bringing pop-culture elements into their own relationship. Jared and Ashley I. had a date that involved La La Land and *NSYNC, according to Jared's recent Instagram post.

On Oct. 1, Jared posted a throwback selfie with Ashley and revealed,

"This was from one of our first dates as boyfriend and girlfriend. We went to the park where Emma Stone and Ryan Gosling go to in La La Land, we had a bottle of champagne and slow danced to *NSYNC. It was a great night."

This wasn't the first time that Jared mentioned this date on Instagram, but it was the first time he revealed there was *NSYNC music involved in addition to the La La Land references.

In an earlier Instagram post from June 1, Jared shared a photo of himself and Ashley at dinner. He shared, "Ashley surprised me with dinner at the restaurant they filmed La La Land. It's the place Ryan Gosling and Emma Stone first meet. This is one of the many reasons why I love her."

La La Land and *NSYNC might not seem like the most logical pairing, but it makes a lot of sense when it comes to this particular couple. Jared loves the movie La La Land and Ashley is a very avid *NSYNC. That date was just the perfect merger of both of their pop-culture favorites.

In February 2017, Jared tweeted, "'Is this the start of something wonderful, or one more dream that I cannot make true'..the more I think about LaLaLand the more I love it." And his future wife is clearly paying attention to his preferences.

In May 2017, Jared reposted a GIF of Ryan Gosling and Rachel McAdams at the MTV Movie awards and admitted that it was "Reason Number 2,467 why I want to be Ryan Gosling." Well, he came pretty close to that be channeling La La Land during that date.

In June 2016, a fan asked Jared which Gosling character would be the best contestant on The Bachelorette. Jared answered, "Such a great question, Ryan Gosling from Crazy, Stupid, Love...hands down." Maybe Crazy Stupid Love will be the next Gosling movie incorporated into a Jashley date night?

And as for Ashley, she's such an enthusiastic boy band fan that she even has the words "Boy Bands" listed in her Twitter bio. This makes sense since she's been tweeting about her love of the band for years.

All the back in July 2009, Ashley tweeted, "K so I really miss *Nsync." That is a sentiment that a lot of people can agree with.

In 2010, Ashley revealed that her love of the group goes way back. She tweeted, "Just put on my Forestville class of 2000 shirt and realized 6th grade was a decade ago. I started loving *Nsync 11 years ago?! Crap yo."

Based on that math, Ashley has been an *NSYNC superfan for 18 years. Wow, that is some serious dedication.

In November 2017, Ashley revealed, "I just spent $180 on new *NSYNC Christmas merch." In all honesty, that sounds like a sensible holiday purchase.

On Christmas Eve that same year, she sported her *NSYNC Christmas sweater and tweeted, "Hey @NSYNC, do you know the impact your Christmas album has had on this time of year? I think it’s officially a classic." It truly is an iconic album.

*NSYNC and La La Land might not make immediate sense as a combination, but then again, neither did Jared and Ashley I. It turns out that both of those pairings are pretty impeccable and very romantic.