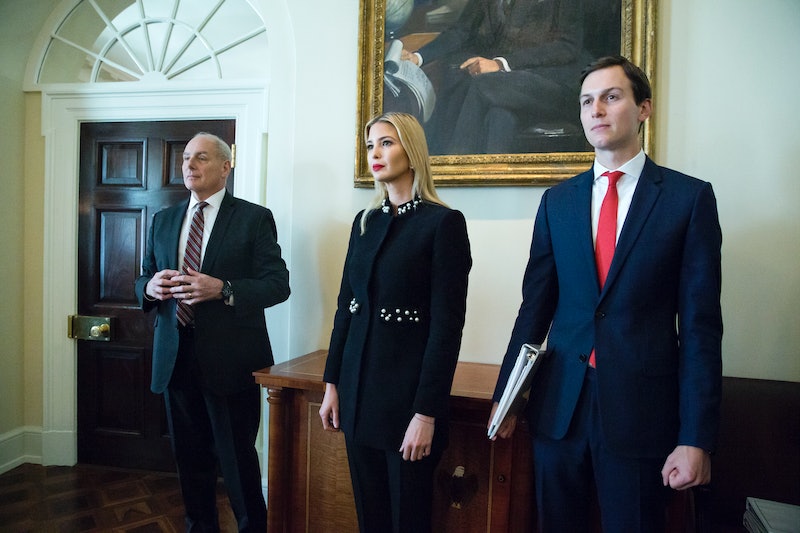 While President Donald Trump's recent announcement that White House Chief of Staff John Kelly would be stepping down from his position by the end of the year didn't exactly come as a surprise — it followed months of speculation regarding the pair's reportedly deteriorating relationship — details of Kelly's ousting have raised eyebrows. According to The Washington Post, Jared Kushner and Ivanka Trump were influential in pushing Kelly out the door.

Trump refrained from elaborating on the reasons behind Kelly's forthcoming departure Saturday, telling reporters outside the White House only that "John Kelly will be leaving — I don't know if I can say 'retiring.'" But according to The Washington Post, there were forces within Trump's inner circle who had long been working to see the retired four-star Marine Corps general replaced as chief of staff — namely Kushner and Ivanka.

According to Josh Dawsey, Seung Min Kim, and Philip Rucker of the The Washington Post, Kelly "clashed" with Kushner and Ivanka, who both serve as senior advisers to the president, "so often" that their relationship eventually became "uncomfortable." As a result, Kushner and Ivanka reportedly "battled for some time" to see Kelly replaced as chief of staff, The Washington Post reported. Bustle has reached out to the White House for comment.

It's no surprise that Kelly reportedly clashed with Kushner and Ivanka as the retired military general is reported to have been frustrated with Kushner even before he was named White House chief of staff. In September of last year, Politico reported that Kelly, as secretary of Homeland Security, had been "concerned" that Kushner appeared to have "free range to function outside his lane."

According to the news outlet, Kelly had been upset to learn that Kushner was, without his knowledge, reportedly "back-channelling" with some senators regarding a deal to protect Dreamers from deportation.

A few months later, The New York Times reported that Kelly had allegedly "discussed the possibility" of Kushner and Ivanka leaving their roles at the White House by the end of 2017. When questioned about those rumors by The Times, however, Kelly said, "There was honestly never a time when I contemplated getting rid of Jared and Ivanka," the paper reported. And indeed, neither the president's daughter or son-in-law has left their White House post.

Still, reports claiming that things between Kelly and Jared and Ivanka were strained continued to persist. In March, The Times reported that Trump's children had "grown exasperated" with Kelly and viewed him "as a hurdle to their father's success and as antagonistic to their continued presence." What's more, the paper also reported that Trump had asked Kelly to help him push Kushner and Ivanka out of the White House and back to New York.

Then in September, Vanity Fair reported that Kushner and Ivanka were accusing Kelly of being behind the leaks mentioned in Bob Woodward's book, Fear: Trump in the White House. "He's destroying your presidency," Ivanka was reported to have told Trump.

While it's impossible to know exactly how, or even if, Kushner and Ivanka helped sway Trump's decision to force Kelly out, the pair are reported to have remained central and influential members of the president's innermost circle while others are being shown the door.