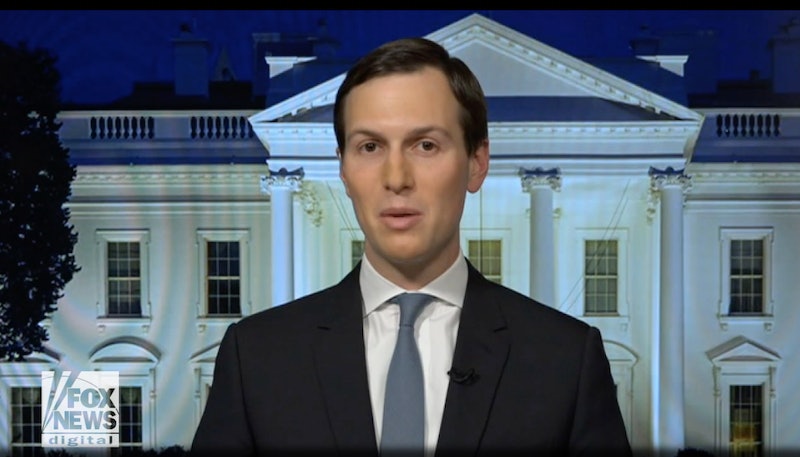 On Monday, Fox News aired Jared Kushner's Sean Hannity interview on prison reform, during which the president's son-in-law discussed a related criminal justice bill at length. As he was interviewed, Kushner also mentioned Alice Marie Johnson, a previously-imprisoned woman famously granted clemency by Trump after Kim Kardashian drew his attention to her case. Kushner cited Johnson's case as an example of how Trump's prison reform bill could effect change.

As Fox News reported, Kushner told Hannity that one of the main goals of the bill is to diminish recidivism, or someone's propensity to return to criminal activity. The presidential advisor noted that the bill is particularly focused on ensuring that non-violent offenders spend less time in prison — and that they don't return. Kushner then mentioned Johnson as an example of the type of inmate who could stand to benefit from the bill's provisions. As Kushner described to Hannity:

... Alice Marie Johnson; that case was a grave misjustice ... and now is something where he [Trump] realized that there was no reason for taxpayers to be paying to house somebody like Alice, when she can be out in society, being a good role model for others and taking the mistakes that she made and figuring out how to show other people not to make those same mistakes.

As the Washington Post reported, Johnson is a 63-year-old woman who was sentenced to life in prison back in 1996 on federal money laundering and drug charges. Johnson had pleaded not guilty to these charges. Earlier this year, Kardashian became aware of Johnson's case and famously met with President Trump to encourage him to grant clemency to Johnson, whose sentence she believed was disproportionate to her crimes. Trump ultimately commuted Johnson's sentence in June 2018 and she was released from prison after serving 21 years behind bars.

Fox News reported that the aforementioned prison reform bill would diminish mandatory prison terms for some drug crimes and also give judges more leeway in sentencing offenders. Moreover, it would allow federal prisoners who were sentenced on crack cocaine-related charges before August 2010 to file petitions to have their sentences reduced.

Kushner indicated to Hannity that he believes the bill could produce significant positive changes for prisoners and communities — and he thinks that Congress is close to passing it. "This bill will accomplish a lot to make our communities safe ... The recidivism rate that we have is way too high, and not doing anything about that is irresponsible," Kushner said. "And, we’ve been able to build a very strong bipartisan coalition under the president’s leadership. They’ve come up with a bill that we think can really solve a lot of those problems."

The prison reform bill is known as the First Step Act. As Vox reported on Dec. 3, it's possible that the bill could be passed before Congress' session ends this year. However, the opposition of several Senate Republicans means that its passage is certainly not guaranteed. It remains to be seen whether Trump, who supports the bill, can rally members of his party to advance it through Congress. In his role as a member of the administration, Kushner is certainly working hard to try to ensure that the First Step Act becomes law, including by reminding Americans of Johnson's story.